While Russia wages a full-scale invasion of Ukraine, the U.S. Army is putting its soldiers through training on gender pronouns and coaching officers on when to offer soldiers gender transition surgery, according to an official military presentation on the subject obtained by the Washington Free Beacon.

The mandatory presentation, "Policy on the Military Service of Transgender Persons and Persons with Gender Dysphoria," was given to officers earlier this month along with instructions for them to train their subordinates on the material. Portions of the presentation were provided to the Free Beacon by a whistleblower who was ordered to undergo the training as a high-ranking officer in the Army Special Forces. 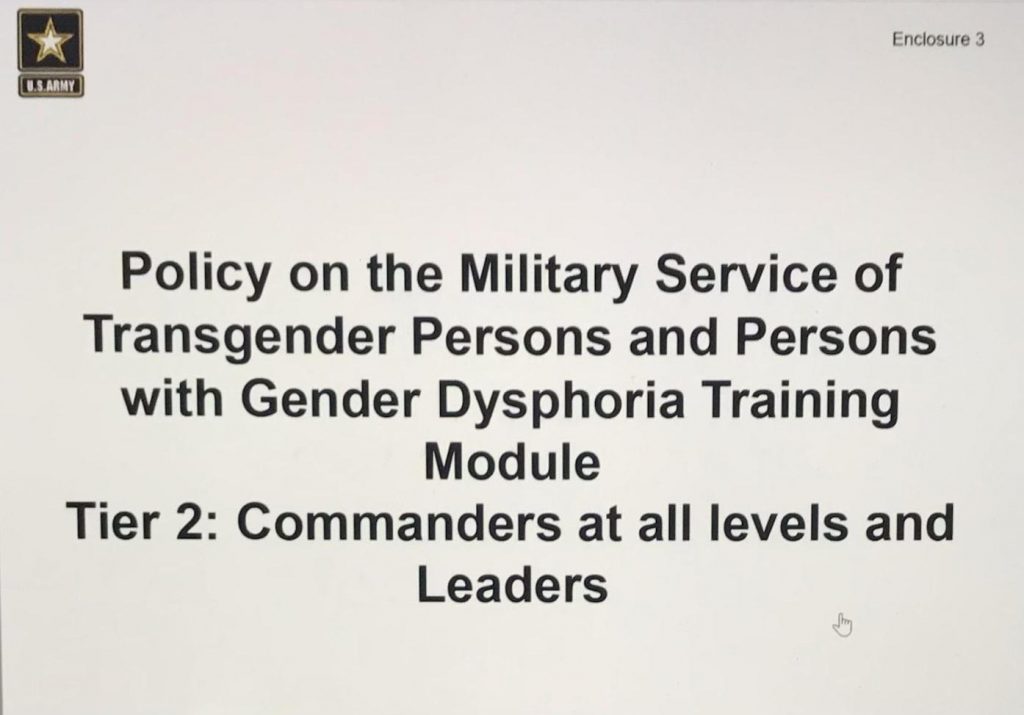 An Army spokesman confirmed to the Free Beacon that the slides in question are part of "mandatory training" and come from an official program "used to train Army personnel on the recent changes to the DoD and Army transgender service policy." All Army personnel, from soldiers to commanders and supervisors, are required to participate in the training by Sept. 30, 2022, according to the spokesman.

The transgender presentation follows on a June 2021 announcement by the Army altering its policies so that transgender soldiers can openly serve. The shift in policy is part of a larger push by the Biden administration to make the military more welcoming to transgender people. These efforts have prompted pushback from Republicans in Congress and some within the military who view the policy changes as an effort to promote "woke" propaganda within the service. As Russia's invasion of Ukraine threatens to spark a larger conflict, military experts and insiders say they are concerned America's fighting force is prioritizing woke culture over protecting the American people.

"The Army allows transgender soldiers to serve openly," states the presentation, which is tailored for Army commanders and leaders. "An otherwise qualified soldier shall not be involuntarily separated, discharged, or denied reenlistment or continuation of service on the basis of gender identity." 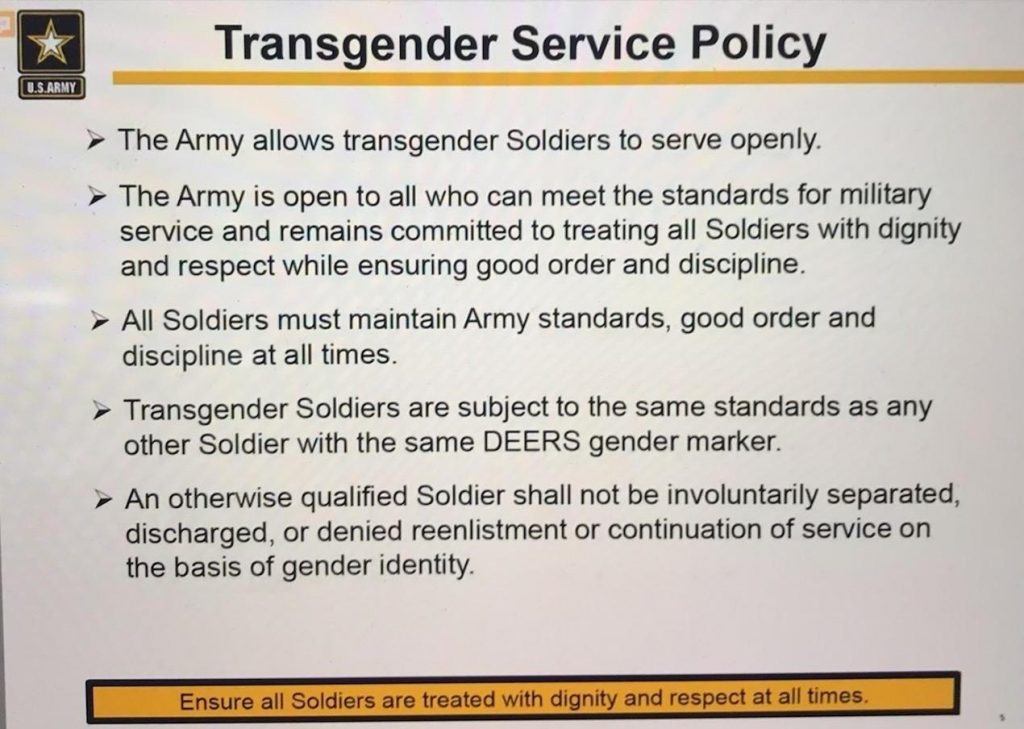 The presentation offers several hypothetical scenarios for how soldiers should be treated if they are transgender or in some stage of transitioning to another gender.

In one situation, a "soldier who was assigned male at birth says he identifies as a female," "lives as a female in his off-duty hours," and "is not requesting to be treated as a female while on duty." In that case, the soldier should be treated with dignity and respect and no further action is required.

If the transgender soldier, however, "later requests to be identified as a female during duty hours and/or experiences increased distress relating to his gender identity," the officer in charge must "inform [the] soldier of the Army's transgender policy and recommend that he sees a military medical provider."

"Gender transition in the Army," the presentation states, "begins when a soldier receives a diagnosis from a military medical provider indicating that gender transition is medically necessary." 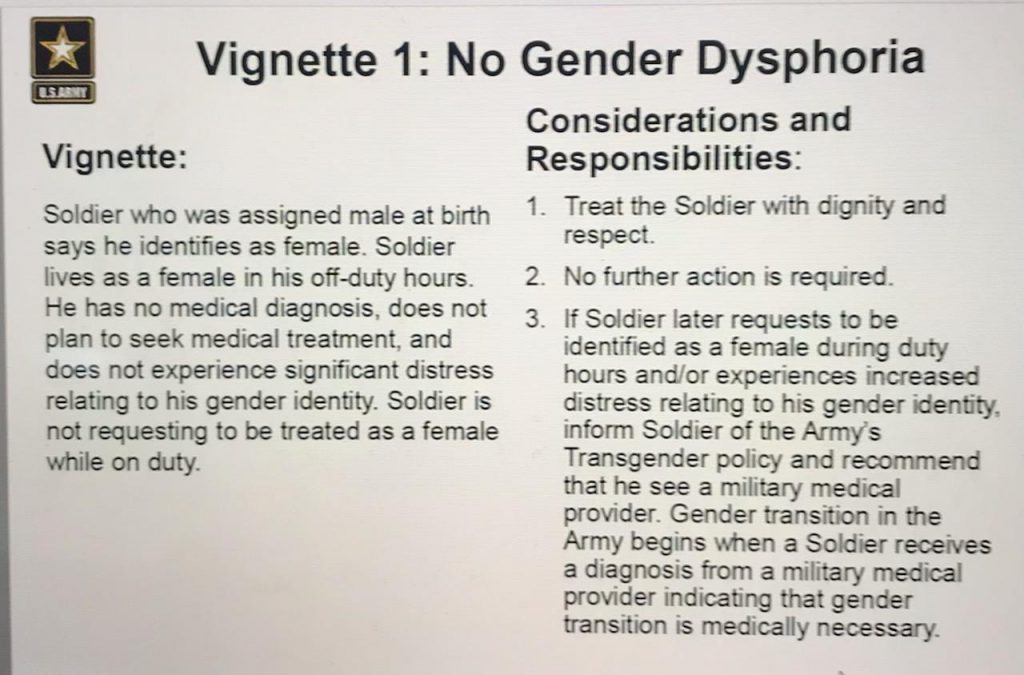 In another scenario included in the presentation, a "soldier is assigned female at birth. She tells her first sergeant that she identifies as male and would like to be treated as a male. She has not yet seen a military medical provider."

In this situation, Army leaders are ordered to "inform [the] soldier that the Army recognizes a soldier's gender by the soldier's gender marking in DEERs," or the Defense Enrollment Eligibility Reporting System, a massive database that tracks military members. The soldier, according to the presentation, will be expected to meet the uniform, grooming, and physical readiness standards associated with their recognized gender.

The soldier will then be sent to a military medical provider who can determine whether "gender transition is medically necessary." 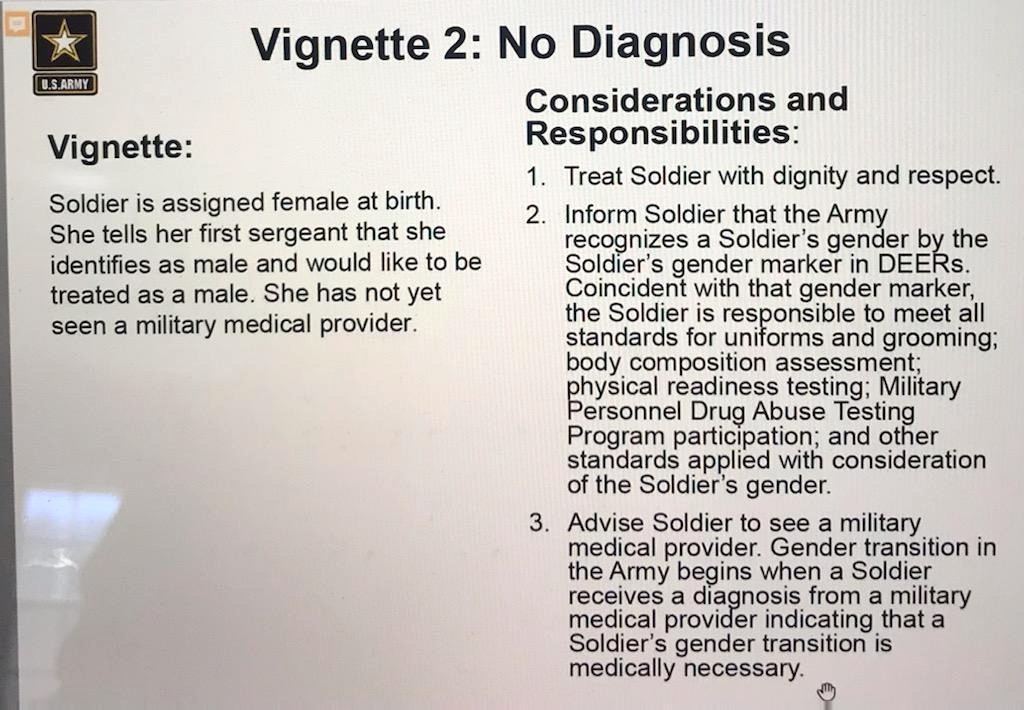 The Army spokesman who confirmed the authenticity of the slides to the Free Beacon emphasized that "service in the Army is open to all who can meet the standards for military service and readiness."

"We remain committed to treating all soldiers with dignity and respect while ensuring good order and discipline," the spokesman said. "Soldiers who meet those standards can serve openly in their self-identified gender."

The presentation was published for the military branch in August 2021 and was created by the Army Service Central Coordination Cell (SCCC), "which is comprised of medical, legal, and military experts," according to the spokesman. "The Army SCCC used language from DoD policy, handbook, and lessons learned to develop the vignettes provided in the training."

"Every soldier is different," Maj. Gen. Douglas F. Stitt, military personnel management director, said in a statement at the time. "When a military medical provider gives a diagnosis of gender dysphoria, that soldier will need to sit down with their chain of command and medical provider to determine what is medically necessary for an effective transition."

Army commanders, the policy states, "should approach a soldier's gender transition in the same way they approach any soldier receiving any other necessary medical treatment."

Dakota Wood, a Marine Corps veteran who specializes in defense issues at the Heritage Foundation think tank, said the Army presentation employs language primarily used by those on the progressive left.

"A telling phrase in the presentation—'assigned (male or female) at birth'—reveals that whoever developed the presentation material, and the policy being implemented, accepts the argument that gender is an artificial construct rather than a biological reality," Wood said. "This is a highly controversial argument promoted by the progressive left and rejected by the conservative right."

These policies threaten to erode cohesion among soldiers, Wood added.

"Using such examples to illustrate instances where Army leaders need to treat a soldier in one way or another highlights the types of social policies being imposed on the military services. There are a great many people in the military, arguably the vast majority, who do not agree with this manufactured construct," Wood said. Forcing soldiers "to accept the premise—that one can choose their gender and therefore change how they are to be treated—creates frictions within organizations that are dependent on unity and cohesion to be successful in combat."