Big Bird, the character best known for its role on the children's program Sesame Street, invited backlash over the weekend by claiming to have received a COVID-19 vaccine. Critics were quick to point out that the Centers for Disease Control has yet to approve the vaccine for fictional anthropomorphic birds and expressed concern about the anti-science message that Big Bird's "vaccination" was sending our children.

The controversy continued on Monday, when internet sleuths dug up some of Big Bird's old social media posts, including several that contained offensive language and exposed the character's ties to controversial celebs. In June 2018, for example, Big Bird liked a fan's Twitter post that described the Sesame Street character as "my spirit animal." Anti-racism experts have repeatedly denounced the phrase "spirit animal" as an offensive appropriation of Indigenous culture. 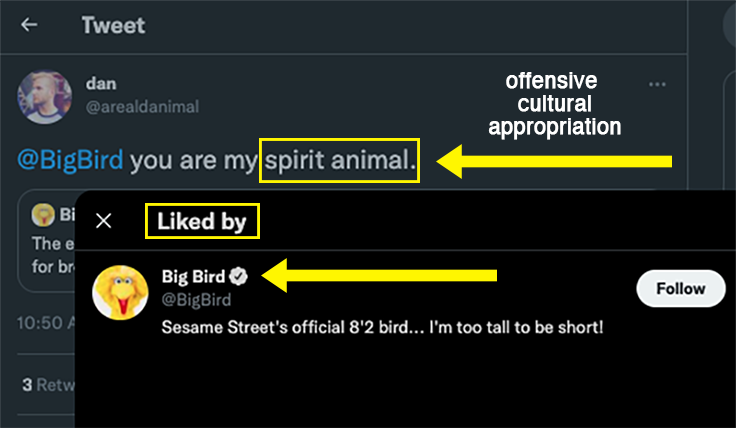 "To 'claim' a spirit animal is arguably extremely arrogant and shows a misunderstanding of the concept and respect for what they are," said Tristan Picotte, who was raised in the Lakota tribe on the Cheyenne River Reservation in South Dakota, in an interview with Yahoo Life.

The phrase has in recent years become increasingly popular almost exclusively among elite liberals and other morons who spend way too much time on the internet. Democratic strategist Tim Lim in December 2020 used it to describe failed candidate Hillary Clinton as "my spirit animal forever and always." Over the summer, former MSNBC host Touré, a.k.a. "Young Daddy," claimed tennis star Venus Williams as his "spirit animal." MSNBC host Ali Velshi also used the phrase earlier this year. Alas, its popularity among a certain demographic does not make it any less offensive.

Big Bird has also used its official Twitter account, which declines to list the character's preferred pronouns, to promote sugar consumption among children. Science has conclusively determined that sugar is bad for kids. The Sesame Street resident has endorsed the inflammatory suggestion that an individual's racial background or "color" is subjective and can change based on how that person might feel at a given time. "Some days I'm feeling blue, some days I’m tickled pink… but most days this bird is mellow yellow. What color do you feel today?" Big Bird tweeted in August 2020.

As if that weren't alarming enough, the internet sleuths unearthed a series of social media posts and old photographs that highlight Big Bird's ties to other celebrities who have been denounced for offensive behavior. For example, the character promoted its collaboration with Hamilton writer Lin-Manuel Miranda for the Apple TV series Dear…, which debuted in June 2020. The recent film adaptation of Miranda's musical In the Heights was an objectively racist tribute to white supremacy. The Broadway celeb has also been accused of fostering a transphobic workplace environment.

Big Bird's other problematic "friends" include controversial TV hosts Jimmy Kimmel and Ellen DeGeneres. Kimmel was forced last year to issue what the Los Angeles Times described as a "lame" apology for repeatedly wearing blackface in his comedy performances. DeGeneres, meanwhile, has been accused of presiding over a "toxic work culture" in which employees are routinely subjected to "racism, fear, and intimidation."

On the set of Sesame Street, the giant yellow bird has mingled with the likes of convicted rapist Bill Cosby, disgraced Hollywood pervert Kevin Spacey, and Jeopardy! champion Ken Jennings, who once argued there was "nothing sadder than a hot person in a wheelchair," among other offensive tweets that precluded him from succeeding Alex Trebek as host of the popular quiz show. 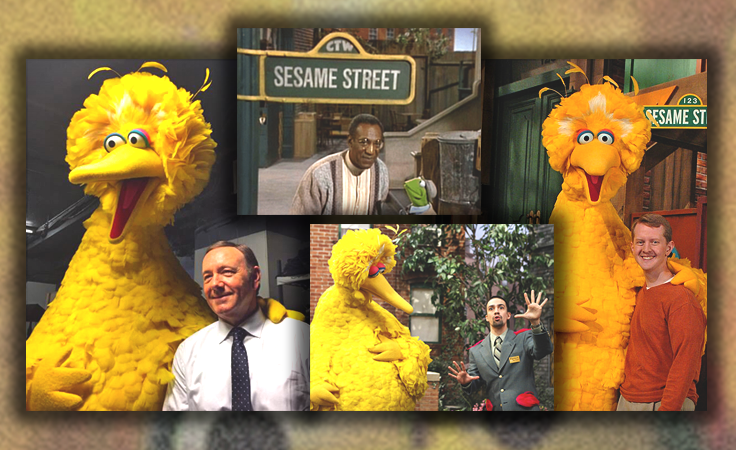