Elizabeth Warren's presidential campaign is using the candidate’s own story of her dismissal from a public school teaching job because she was pregnant to juice donations as the story itself has drawn scrutiny.

"By June I was visibly pregnant—and the principal told me the job I'd already been promised for the next year would go to someone else," blares the subject line of Warren's latest fundraising email.

The pitch echoes parts of the story Warren has repeated time and again on the campaign trail, noting that it was her "dream" to become a public school teacher.

Warren's Tuesday night fundraising email comes as several outlets have raised questions about the veracity of her claims. Official school board records obtained by the Washington Free Beacon reveal Warren was indeed offered a second-year contract by Riverdale Elementary School, and that she offered her resignation months later. The records appear to contradict Warren's story that the school principal "didn’t ask [her] back for the next year" because she was "visibly pregnant."

The records also appear to align with a version of the story Warren told in 2007. Speaking at UC Berkeley, Warren said she decided to move on from teaching after realizing the required graduate school courses weren’t going to "work out for [her]."

Warren did not respond to a Free Beacon request for comment, but she stood by her story in an interview with CBS News.

"All I know is I was 22 years old, I was 6 months pregnant, and the job that I had been promised for the next year was going to someone else," Warren told CBS. "The principal said they were going to hire someone else for my job."

In addition to asking for contributions, Warren's Tuesday night email calls on supporters to share their own stories of "pregnancy discrimination."

"It's important for the public to know just how pervasive pregnancy discrimination is, and how many families it affects," Warren writes in the email. "If you or someone you know has ever faced discrimination in the workplace for being pregnant, join me and share your story today."

"We can fight back by telling our stories," she writes. "I tell mine on the campaign trail, and I hope to hear yours." 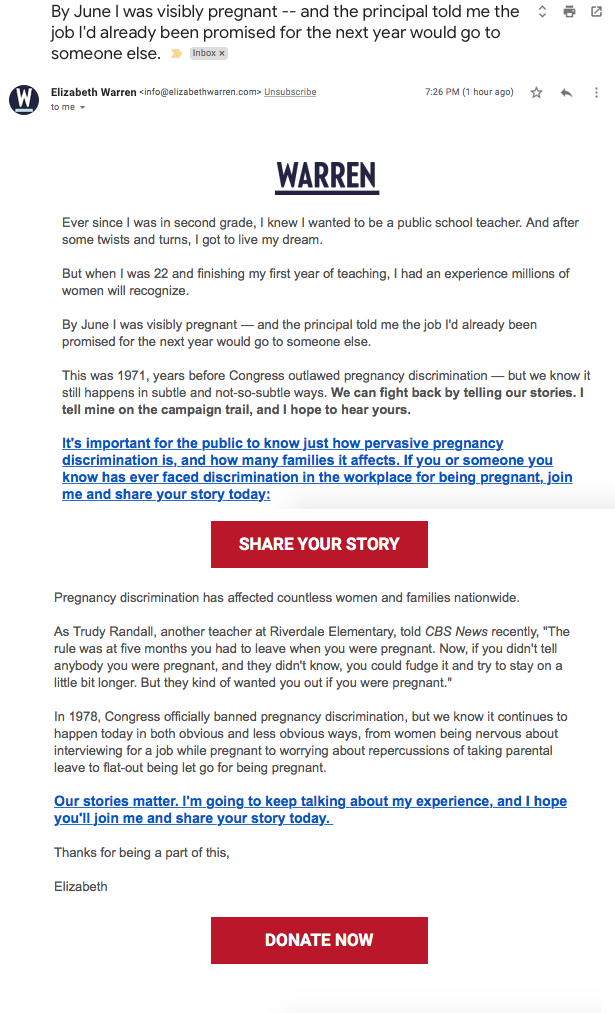