USA Today on Sunday revised a column that argued Supreme Court nominee Brett Kavanaugh should refrain from going on basketball courts when kids are around. The piece was widely criticized on social media.

"The U.S. Senate may yet confirm Kavanaugh to the Supreme Court, but he should stay off basketball courts for now when kids are around," wrote Erik Brady. A screenshot of the original column is included below. 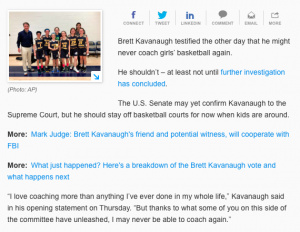 The revised column no longer includes that sentence, and contains an editor's note at the top of the piece:

Supreme Court nominee Judge Brett Kavanaugh has told members of the Senate Judiciary Committee he loves coaching his daughters' girls basketball teams, but said in testimony Thursday "thanks to what some of you on this side of the committee have unleashed, I may never be able to coach again."  The intent of this commentary was to address that question. The column was re-edited to more closely reflect that intent and labeled to reflect it as the writer’s opinion.

A previous tweet contained a statement that has since been edited out of a sports column. That tweet has been deleted. The updated opinion column and editor’s clarification are here: https://t.co/zhFOWMIjCb

During his testimony before the Senate Judiciary Committee on Thursday, Kavanaugh discussed his love of coaching his daughter's girls basketball team.

"I love coaching more than anything I’ve ever done in my whole life," said Kavanaugh. "But thanks to what some of you on this side of the committee have unleashed, I may never be able to coach again."

Last week, the Senate Judiciary Committee heard testimony from Kavanaugh and Christine Blasey Ford, a woman accusing him of sexual assault while they were in high school. Ford alleges Kavanaugh forced her onto a bed, groped her, and tried to remove her clothes while he was heavily intoxicated, all while his friend Mark Judge watched.

A prosecutor hired by Republicans on the committee told GOP senators she, based on the evidence, would not have prosecuted Brett Kavanaugh or even have been able to obtain a search warrant.

The FBI is currently investigating sexual assault accusations against Kavanaugh. The decision to launch an FBI probe came after Sen. Jeff Flake (R., Ariz.) requested a week-long investigation prior to a floor vote on Kavanaugh's confirmation in the Senate.