Steyer delivers articles of impeachment to the House Judiciary Committee

When billionaire Tom Steyer launched Need to Impeach in October 2017, he didn't know he would end up devoting 100 percent of his time to advocating for President Donald Trump's removal from office.

But here we are in January 2019, and Steyer has got a full metal jacket of impeachment ammo. Today, he has assembled an impressive array of muffins, melons, cornbreads, and kiwis at a press conference capping off his two-day-long Need to Impeach Summit. Along with Rep. Al Green (D., Texas) and a sober group of activists, Steyer steps up to a podium and informs us that it is his intention to tell members of Congress that if they don't immediately act to impeach Trump, neither Steyer nor his seven million email subscribers will support them in reelection efforts.

It's not a new mission, but Steyer is adamant in his beliefs and his followers are outspoken in rhetoric.

"We know we have to get the people making decisions to listen to us," Steyer said at his Impeachment Town Hall on Monday night.

This morning, however, his supporters steal the show.

"I truly believe we have a lawless president in the White House who is attacking our democracy. And it just gets worse, day after day," says Rita Fonz, a women from St. Petersberg, Fla.

"We've done half your work. Now we want you to do your job," she says, slowly for emphasis. "Protect us. Protect democracy and this crisis, now."

As Fonz finishes, the Need to Impeach supporters and some journalists applaud. A few people whistle through their teeth. A woman in purple nearby me smiles. "Wow," she says.

And then it's all eyes on Steyer. This is his show, after all. The billionaire adjusts his red tartan tie and invites the press to follow him across Constitution Ave. and the Capitol lawn to the Rayburn building, where he will deliver articles of impeachment to House Judiciary chair Rep. Jerry Nadler (D., N.Y.). The rest of Steyer's loyal activists head for the Hill—off to deliver Steyer's ultimatum to the rest of Congress. Meanwhile, Green embraces Fonz in a long hug before exiting quietly with a staffer. 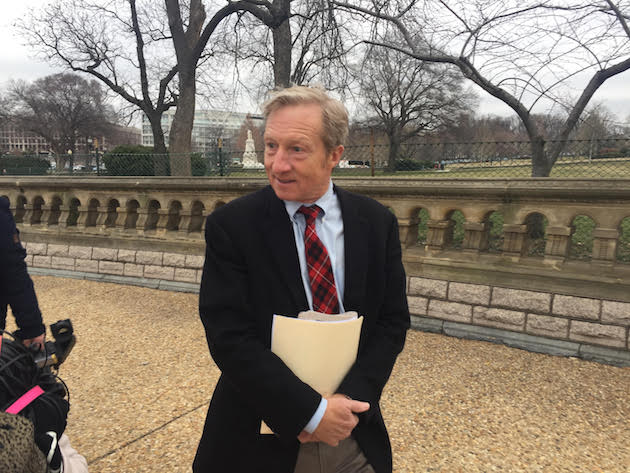 Once we reach the lobby, however, the swarm of journalists thins. It's a cold day outside. And not everyone has a coat. But Steyer is unflappable and begins making his way across Constitution. We all follow at first, but one by one, the journalists melt away.

As we near the Rayburn building, some of Steyer's own people begin complaining.

"I'm not cold. Are you cold?" Steyer laughs and clutches his only covering—a manila folder and copy of today's Wall Street Journal—closer to his threadbare blazer. "I'm going to take my jacket off."

But he doesn't, thank God, and we enter a long line to get into Rayburn. Steyer whistles a tune of his own device while we wait. Several activists repping various causes recognize his face and approach him. One woman from New Jersey shakes his hand. She tells him how she greatly admired a speech he once gave in her home state.

"That was a really good day, I really enjoyed that," he says. The two trade business cards.

Once we enter Rayburn, Steyer leads us down the labyrinthine halls in a meandering search for Nadler's office. He's still whistling, and jokes with his personal assistant.

"Do they know we're coming?" he asks.

Steyer chuckles again: "Well I think that will be plenty."

After a wrong turn or two, we reach Nadler's office. Steyer leads his crew in and asks to speak to the congressman. But Nadler isn't in today—he's leading a vote on the House floor—and it doesn't look like the billionaire activist will get to spread his gospel. The staffers rush into the back room to decide what to tell him.

Steyer fiddles with a copy of Roll Call, and he turns to us: "They're trying to figure out what to do," he says.

Just then, we look up at the TV playing C-SPAN and see Nadler moderating a debate. No way Steyer gets to talk to him today.

Nadler's communications director, Daniel Schwarz, comes into the room to diffuse the situation.

"Sorry, we're in a hearing right now," he tells Steyer. "This is not the best time because, well, everyone is on the floor."

No matter, Steyer replies. He'll pitch his piece anyways. He hands over the folder with the articles of impeachment and explains that unless Nadler acts, he will lose Steyer's support. Schwarz thanks Steyer, but tells him that Nadler will not likely support impeachment without sufficient proof.

"How do you think it went?" I ask as Steyer leaves the room.

"Perfunctory," he replies. "But we delivered our information."

As we make our way down to Rep. Elijah Cummings (D., Md.), Steyer explains that he firmly believes unless Congress acts, it is using the Mueller investigation as "a reason not to do anything." He wants all congressmen to know that they need to act, or they are licensing Trump's criminality.

"What if none of them are in their offices, like Nadler?" I ask.

"I'll do exactly what I just did," he says. "I'll leave the information."

"And hope for the best?"

"Look, I don't think, as golden-tongued an orator as I am, that I am going to convince anyone," he says and snorts a bit. "I just want to make sure that we are letting them know what we are doing so that they don't think we are blindsiding them. We are trying to be as straightforward as possible."

"Do I really expect them to change their minds because I stopped by their office for 15 minutes?" Steyer says, as he shakes his head. "No. Why would they?"

Cummings is not in, but he meets with one of his staff. The two sit on the couch, as Steyer explains his proposal. The staffer nods along, murmuring "okay" at all the appropriate moments.

"I appreciate you coming by," he says, as Steyer finishes his pitch.

Outside, Steyer flashes another big smile to the cameras.

"Perfunctory," he chuckles, and struts down the hall for a photo-op. 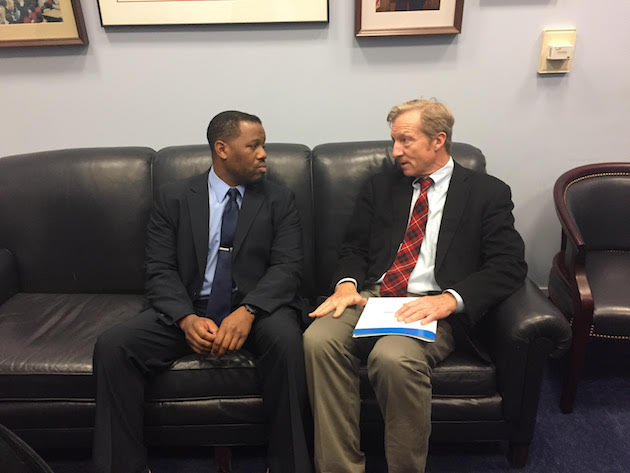 Tom Steyer talks with a staffer for Rep. Elijah Cummings

Update 8:17 a.m.: Tom Steyer met with a staffer for Rep. Elijah Cummings and not with the member himself.