A Twitter account run by NBC's Today earned internet scorn Thursday after tweeting that there was a "debate" over the safety of vaccination.

Actress and three-time Golden Raspberry Award nominee Jessica Biel appeared before the California State Assembly this week to oppose SB 276, a bill that would tighten the requirements for parents to claim a medical exemption for mandatory vaccinations. Amid criticism, Biel said on social media she was "not against vaccinations," but wished to "support families having the right to make educated medical decisions for their children alongside their physicians."

Today was among the outlets covering the dust-up. But while its story called the claim that vaccines cause autism a "myth," its tweet linking to the story asked "Are vaccines safe? Jessica Biel reignites debate." 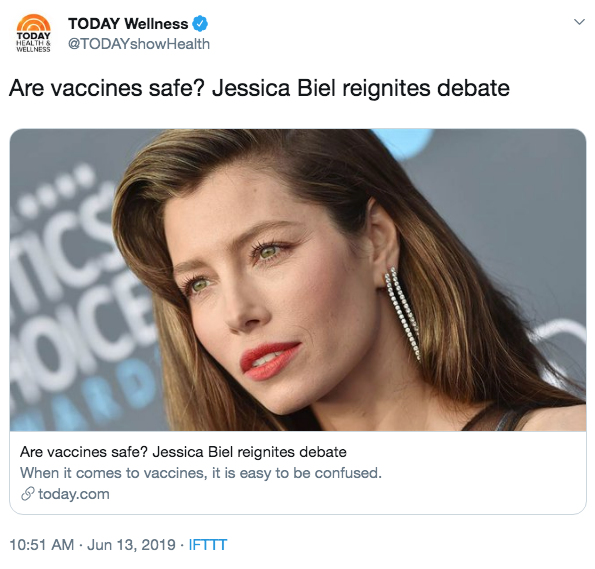 The tweet quickly became swarmed with angry Twitter denizens noting that there is no serious medical debate over the vaccination and that the "anti-vaxxer" position costs lives.

There is no "debate" on this, this is a shockingly irresponsible way to frame this story. https://t.co/ALwrOLE7r9

This is not a debate.

hey I know a lot of people are saying this is a bad, irresponsible, and even dangerous tweet but I'm just here to let you know that they are absolutely right

Looking forward to the other @TODAYshowHealth features this week:

Which Chainsaw Is Right for Your Toddler?
Boa Constrictors: Nature's Nannies
How Much Broken Glass Should You Feed a Three-Year Old?

The tweet was eventually deleted, but not before earning one of the all-time high "ratios," Twitter's universal metric for disagreement. One screenshot found there was a whopping 1759 mentions to only eleven retweets, nearly 160 Ioffes.