The Protocols of Apple

The virulently anti-Semitic "Protocols of the Elders of Zion" is now available in virtual form as an application in both the Apple iTunes and Android marketplaces, according to a report by Middle East Media Research Institute (MEMRI).

For just 99 cents iPhone users can download the Protocols from the "Education" section of Apple’s online marketplace. A portion of the profits from the application’s sale ostensibly go to Apple, as developers engage in a 70-30 split of revenue with the computing giant, according to Apple’s guidelines and the MEMRI report.

The application is also available on Android smartphones at no cost, MEMRI reports.

The sale of the ancient, anti-Semitic tome has drawn ire from several Jewish organizations that have urged the computing giants to ban the applications. Both Apple and Google, which produces the Android platform, have remained mum thus far, refusing to take action.

The Protocols of the Elders of Zion is a decades-old book purporting to reveal the ways in which Jewish people control the international monetary system, as well as politics and foreign policy. Though it has been widely discredited in most of the Western world, the anti-Semitic book is still heavily circulated throughout the Middle East and Arab countries.

One Android version of the Protocols, which includes images of swastikas, has been downloaded by users "between 500-1,000" times, according to the report.

Another English version of the application that can be accessed from Google Play via an Android smartphone is currently on sale for one dollar.

The description reads: "The document known now as the Protocols of the Learned Elders of Zion is one of the most important documents ever to come to light in the world. In fact, it can be described as the blueprint for the domination of the world by a secret brotherhood."

The Arabic version of the application includes a similar description, according to a translation by MEMRI: "The program contains the 24 protocols, and the program needs neither explanation nor description since it is well known to all by the uncovering of Jewish plots in the past, present, and future." 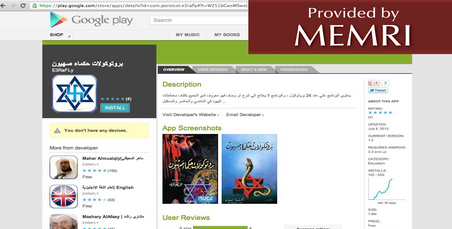 The American version of the Android application has a 5 star rating, Google's highest, and received a fawning review from user Woodchuck, who wrote: "The content and format of the text is very good! Worth the purchase."

The Apple iTunes version of the application promulgates similar conspiracy theories about Jewish control over the world.

"We will see what truths concern and surround each [protocol], and as for the locution we will carry it out in an easy manner, free of the trappings of industry," MEMRI quotes the application as stating.

Extremists in the Arab world are increasingly turning to social media platforms, such as smartphones and tablets, as a means to disseminate their message to younger audiences, experts say.

"In most of the world [the Protocols are] discredited but there's a resurgence in the Muslim World of the Protocols and not just in the apps," said Elliott Zweig, a research fellow at MEMRI who coauthored the report. "Conspiracy theories still exist in the Middle East."

The creators of the applications apparently went to great lengths to hide their identities, according to Zweig, who noted that he and his fellow researchers could not learn much about the applications' provenance.

However, he noted that there are many in the Arab world "furnishing hatred, anti-Semitism, and anti-Americanism" virtually and via more conventional means.

Neither Apple nor Google responded to multiple requests for comment from the Free Beacon.

Zweig said that it is difficult to determine if either company is aware of the anti-Semitic applications. 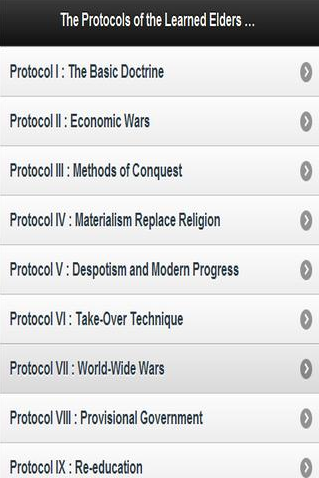 Apple, however, employs notoriously stringent guidelines and approval mechanisms in its marketplace. It has come under fire from technology experts for censoring certain sexual and political applications.

American Jewish groups have condemned Apple and Google for not pulling the apps in the face of public outrage.

"We are appalled ‘The Protocols of the Elders of Zion’ made it through the [Apple] review process, as this text is often used by Neo-Nazis and anti-Semitic Arab groups to drum up hatred toward Jews," B’nai B’rith International (BBI) said in a statement. "Apple is known for its stringent guidelines applications must meet before being approved for sale in the App Store. Apps deemed defamatory, offensive or likely to expose a targeted group to violence are normally rejected by Apple."

BBI sent a letter to Apple officials earlier this week demanding that the Protocols be removed from the virtual marketplace.

The Anti-Defamation League has also condemned the smartphone makers, claiming that in the Arab world, applications such as this only foster greater hate towards Jewish people and Israel.

"In that environment [the Arab world], easier access to this vile forgery through an app only provides reinforcement for hatred of Jews," ADL National Director Abraham Foxman said in a statement. "The Protocols is among the most virulently anti-Semitic documents in modern times and this app creates a new opportunity for it to be exploited, further entrenching anti-Semitic attitudes, particularly in Egypt and Turkey where print editions of the Protocols are sold widely and is regularly glorified in television programs and movies."