Thirty years after the worst outburst of anti-Semitic violence in modern American history, what does justice look like?

Yankel Rosenbaum shuffled through the intersection at President Street and Brooklyn Avenue. The 29-year-old Jewish student was as far away from his home in Australia as he had ever been. He was counting the days until he could see his family again.

It was past midnight, and the streets were more crowded than usual, the summer air teeming with restless rage. Rosenbaum sensed his presence was unwelcome in this part of town and increased his pace. The crowd took notice and turned to face the "other" in its midst, surrounding him. Suddenly a voice bellowed out, as if possessed by an unearthly evil: "Get the Jew!" "Kill the Jew!"

The orders were passed down, definitive and final, infused with a wicked darkness that, just decades earlier, millions had fought and died to eradicate. Rosenbaum, convicted of the crime of his existence and sentenced without trial, felt his Jewish body break against the concrete, thrashed to pieces by the knife blades raining down like broken glass.

Thirty years ago, a prosperous Jewish neighborhood in Brooklyn was terrorized at the hands of a violent black mob.

Today marks the 30th anniversary of the Crown Heights riot, the worst outburst of anti-Semitic violence in modern American history. Perhaps the most lasting insult to the victims is the way in which journalists and other liberal activists have sought to erase the riot from our collective memory and history.

Insult is perhaps too generous a term considering how one of the riot's chief anti-Semitic instigators, the Rev. Al Sharpton, has managed to become a respectable member of the Liberal Élite and one of the most influential Democratic power brokers in New York City and beyond.

The long-hidden racist attack on Hasidic Jews in Brooklyn is finally in the open—and raising questions about all that Americans don't know and have tried to hide.

"The agitation and crowds increased all evening until someone reportedly shouted, 'Let's go to Kingston Avenue and get a Jew!'"

According to most superficial accounts, the Crown Heights riot was ostensibly incited by a fatal crash on August 19, 1991. Yosef Lifsh, a 22-year-old Orthodox Jewish man, lost control of his vehicle after colliding with another car. The station wagon Lifsh was driving skidded onto the sidewalk where two seven-year-old black children were playing. One of the children, Gavin Cato, was killed. The other, Angela Cato, was severely injured.

New York City emergency workers who arrived on the scene several minutes after the collision reported seeing Lifsh being beaten by three or four black men as hundreds of angry residents took to the streets. False rumors swirled among members of the aggrieved mob. Some accused police officers of refusing to help the black children, while others suggested Lifsh was driving while intoxicated. (He wasn't.)

Vowing to exact vengeance upon the Jews, the mob headed west toward Kingston Ave., the predominantly Jewish section of Crown Heights, vandalizing cars and property as they went. Later that evening, a group of about 20 young men surrounded Rosenbaum. They beat him severally, fractured his skull, and stabbed him multiple times in the back. The violence continued for nearly two days.

The Crown Heights riot was hardly a spontaneous act in response to the tragic death of a child. In the days and weeks leading up to the fatal crash, black activists such as Leonard Jeffries Jr., a professor of black studies at City College of New York, had been priming the community for violence with their anti-Semitic tirades.

"Everyone knows rich Jews helped finance the slave trade," Jeffries said in a lecture delivered on July 20, 1991. He accused Jews of colluding with the Mafia to "put together a financial system of destruction of black people." Activists such as Sharpton aggressively defended Jeffries against charges of anti-Semitism. At a rally in Harlem just days before the riot broke out, Sharpton threatened his Jewish critics. "If the Jews want to get it on, tell them to pin their yarmulkes back and come over to my house," he ranted. 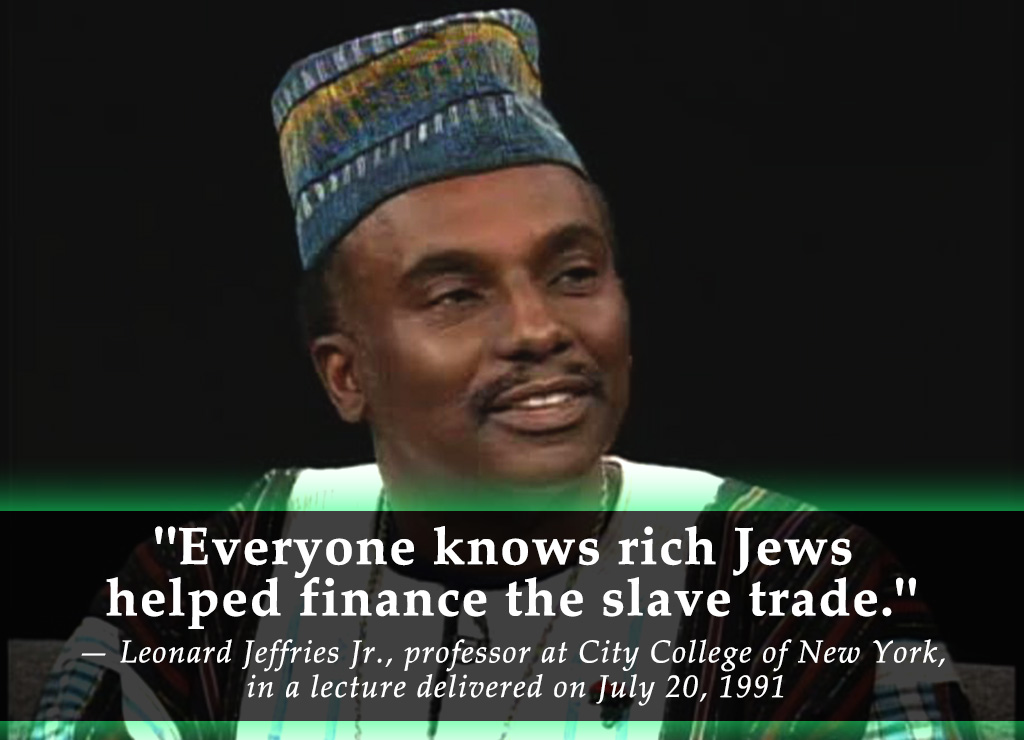 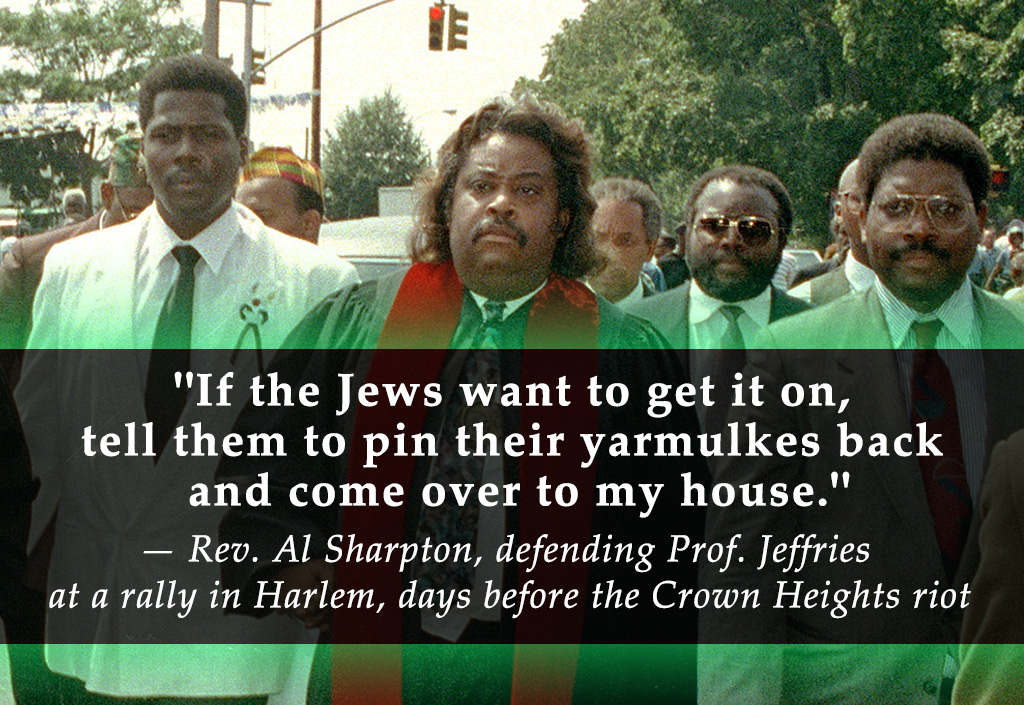 "It's a pogrom. … If we have to wait for the killings, we're finished."

"All hell is breaking loose."

Dozens of Jews were injured in the rioting, as were more than 150 police officers, some of whom reported being under orders to refrain from taking decisive action to quell the violence. A crackdown was ultimately carried out on the third day of rioting, after New York City mayor David Dinkins (D.) was confronted by a violent mob on his way to meet with Crown Heights community leaders and eight police officers were injured by a rooftop sniper.

By the time order was restored, at least 120 people had been arrested. Stores were looted, vehicles vandalized, and millions of dollars of property damage was inflicted upon the community. The Jewish residents of Crown Heights, already traumatized by the violence and destruction, were forced to watch as Sharpton and other charlatans stoked the fires of anti-Semitic hate. 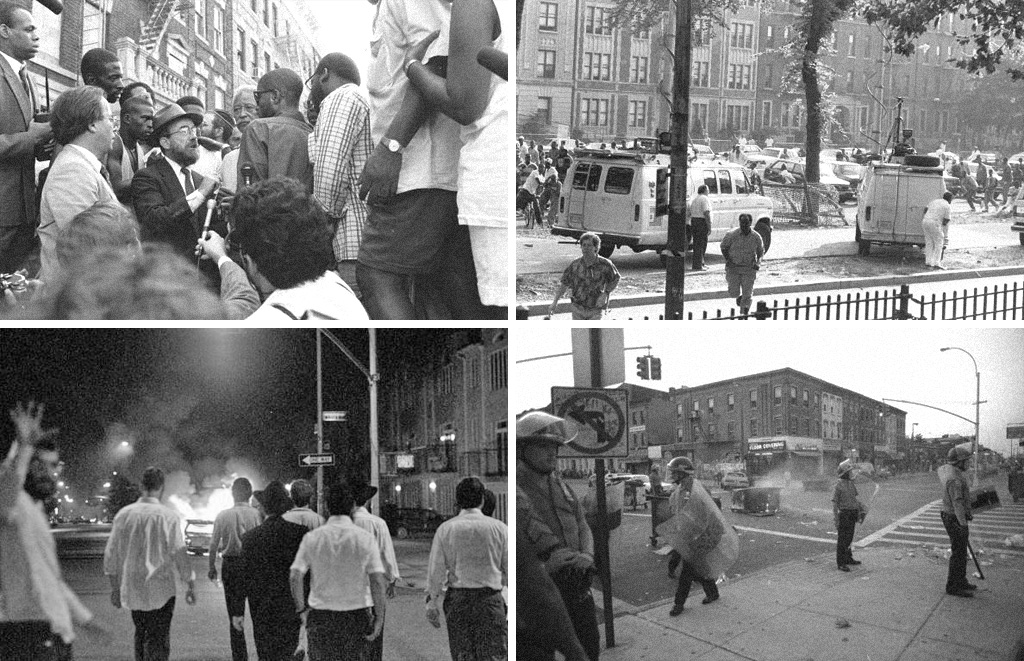 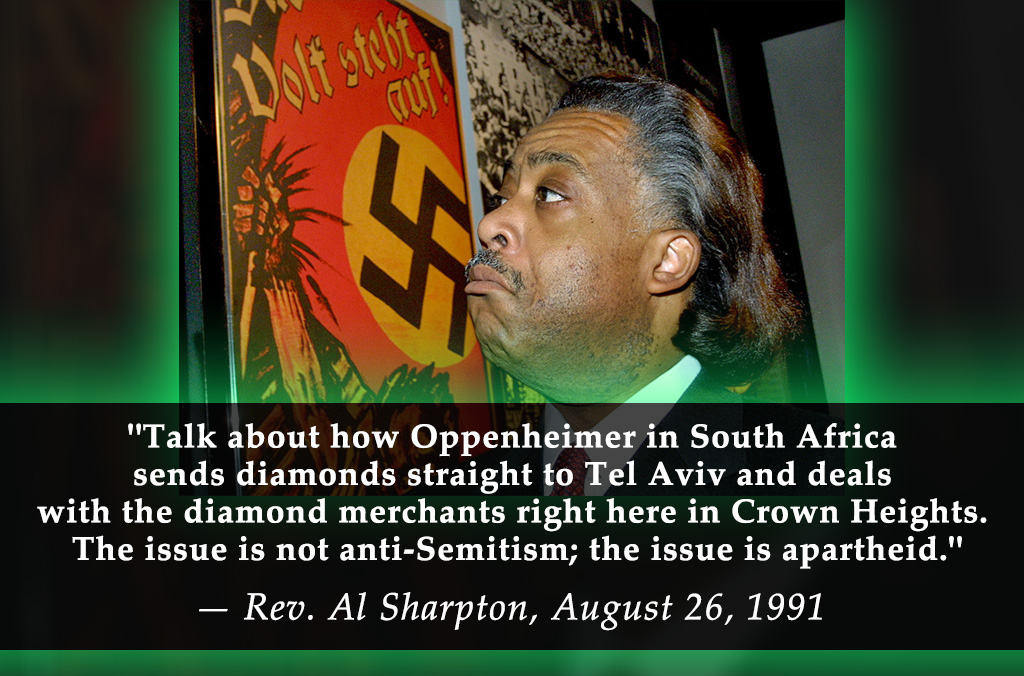 "Rev. Al Sharpton and other inciters were not held accountable. He was able to build his brand as a leader of the African-American community with the help of the media. That was a lesson not lost on other demagogues."