The Clintons and the Sultan of Brunei Have a History

In words spoken from the Sultan of Brunei’s lavish Empire Hotel in 2000, President Bill Clinton told reporters that his post-presidency would be about making money: "Now I have a United States senator to support, I understand that’s an expensive proposition."

Clinton traveled to Brunei with his daughter, Chelsea, for an economic summit that was also attended by leaders such as President Vladimir Putin of Russia and Jiang Zemin, then China’s president.

The sultan, known in Brunei as His Majesty Haji Hassanal Bolkiah, put on an exhibition of luxury for his summit guests. Four hundred ninety three new cars were purchased to transport the various dignitaries around town.

Perhaps the abundance of wealth had an effect on Clinton, who according to New York Times reporters also in Brunei, "made a strong case for his need to start producing some serious revenue flow."

Forging a relationship with the Sultan of Brunei would aid him in that goal.

The government of Brunei contributed between $1 million and $5 million to the Clinton Foundation in 2002, which said that the donation went toward the construction of the Clinton Presidential Library in Arkansas.

Clinton would return to Brunei that same year—this time without his daughter.

Epstein is a registered sex offender who would regularly host Clinton and many others at his private Caribbean island before being put in prison for sexually abusing underage girls around the globe.

He spent just 13 months in jail for the charges, though evidence is reported to have existed that could have led to more serious federal charges such as using his private jet for sex trafficking.

Two of the alleged "madames" linked to Epstein’s case—one of whom reached an immunity deal with prosecutors—were also aboard the flight to Brunei, according to the flight records.

Clinton stayed in the Emperor Suite of the sultan’s Empire Hotel, a $16,600 per night "football-field sized suite that features its own swimming pool and carpets flecked with real gold"

Clinton returned to Brunei in 2005, to thank Sultan Bolkiah for the donation he made to the Clinton library.

"I’m now going to Brunei for a private visit," wrote Clinton on his personal blog. "I want to thank His Majesty the Sultan of Brunei, Hassanal Bolkiah for his generous donation to the Clinton library." 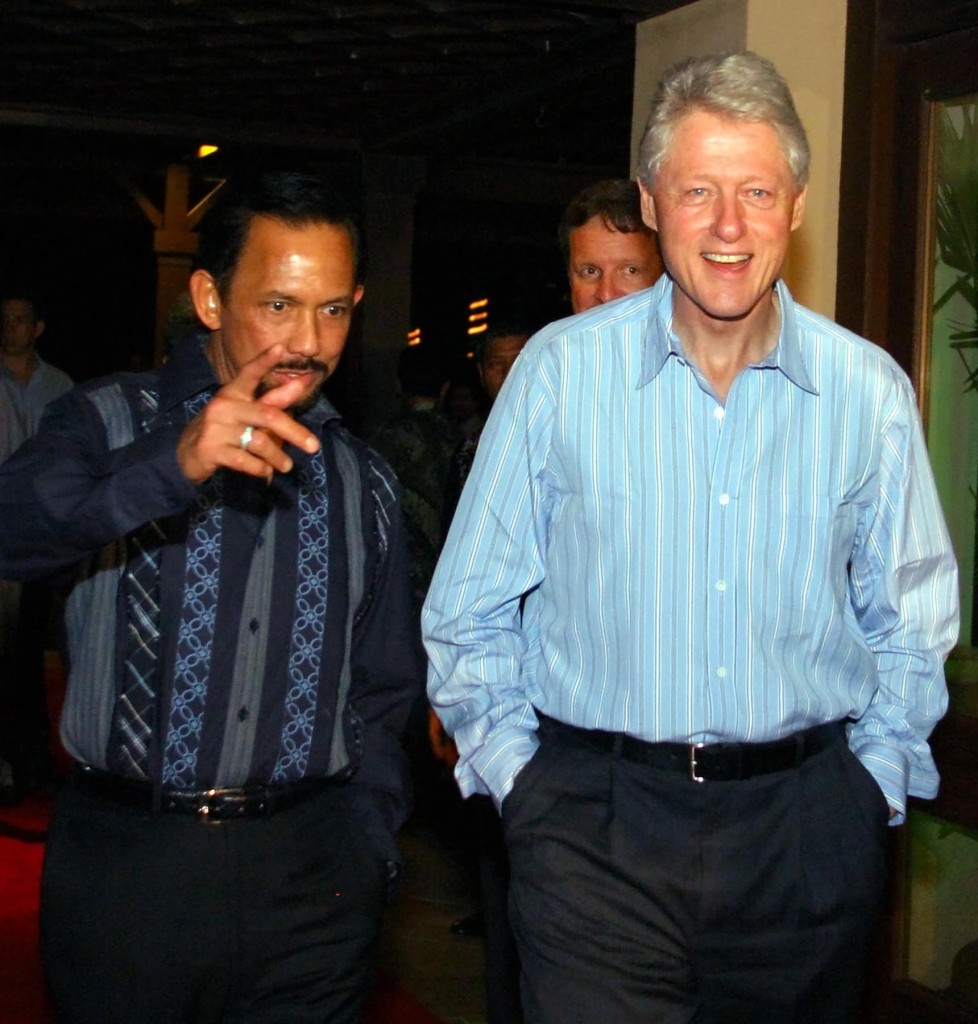 Bill Clinton and the Sultan of Brunei

The sultan, whose net worth was last estimated to be $20 billion, has held the throne in Brunei since 1967.

Also like Epstein, he has been accused of sexual wrongdoing. In 1997, he was sued by a former Miss USA who said she was held as a sex slave, drugged, and molested by Brunei’s royal family. The lawsuit was dropped after the Sultan and his brother claimed diplomatic immunity.

The sultan and his brother Prince Jefri have become "infamous for their sex parties and their harems composed mainly of underage girls."

Jillian Lauren, who at 18 years of age was recruited for Jefri’s harem, wrote a book about her experience in which she claimed that "there’s no such thing as underage" in Brunei. Lauren also had sexual relations with the sultan.

The sultan, however, has also pushed the small country toward radical Sharia law over his decades-long reign.

The shift was accelerated on May 1, 2014, when he announced in a royal decree that "the enforcement of Sharia law phase one" has begun and would be "followed by the other phases."

Crimes such as homosexuality, sodomy, adultery, and the discussion of faith by non-Muslims are now punishable by amputation of limbs, public flogging, or death by stoning.

This shift has made association with the sultan and the nation of Brunei a red flag in the progressive community.

Hollywood stars boycotted the iconic Beverly Hills Hotel, owned by the sultan, after Brunei formally adopted strict Islamic law. The City of Beverly Hills government even adopted a formal resolution urging him to divest from the hotel.

The hotel turned into a "ghost town," as events hosted by the likes of Jeffrey Katzenberg were moved to other venues.

The Beverly Hills Hotel then hired Mark Fabiani, a former Clinton White House aide who handled crisis communications for the administration, to help it deal with the backlash.

The Clinton Foundation has previously stated that the contribution from Brunei was a "one-time donation" and that it does not expect any further donations. A request for comment about whether it has considered returning the money given Brunei’s turn towards repressive Sharia law went unreturned.

As secretary of state, Hillary Clinton traveled to Brunei in 2012 to "meet with senior officials to emphasize the importance of the increasingly vibrant U.S.-Brunei relationship." She joined the sultan for dinner at one of his palaces.

Clinton also accepted $58,000 worth of jewelry from Brunei while she was with the State Department.