Democrats have long railed against the lack of transparency in political funding, but security was airtight this week as a hush-hush network of progressive moneymen and activists held a closed-door conference to map out their plan to shift U.S. policy to the left.

At the elegant Ritz Carlton hotel in downtown Chicago, wealthy donors, Democratic politicians, and representatives from left-leaning activist groups met for a conference hosted by the Democracy Alliance, a progressive donor network that funnels millions of dollars to undisclosed activist groups and political causes.

Access to the conference was invite-only and tightly controlled. Democracy Alliance officials manned a table outside the entrance to the conference areas, where attendees heard speeches by progressive rising stars like New York Mayor Bill DeBlasio and Kentucky Senate candidate Alison Lundergan Grimes.

Conference-goers also attended panels on a host of progressive pet issues such as climate change and health care reform.

But even most of the invited attendees were barred from a room marked "Partners Only." There, Democracy Alliance’s deep-pocketed donors listened to contribution pitches, announced new funding pledges, and viewed power-point presentations evaluating the finances and performances of Democracy Alliance-funded groups, according to two sources in the room.

Most attendees were not allowed in the "Partners Only" room.

Partners in the Democracy Alliance are reportedly required to contribute a minimum of $200,000 per year to activist groups approved by the organization and pay annual dues of $30,000.

Many conference-goers bristled when questioned about the secrecy of the event.

"I think people are having private conversations," said Michael Vachon, a top advisor to George Soros. "There is no conspiracy."

When pressed on why the event was closed to the media, Vachon asked, "have you read the Free Beacon?"—a reference to the popular Washington-based news outlet whose scoops have occasionally rattled the left.

Other conference-goers ripped off their nametags when a Free Beacon reporter approached them to ask for an interview. Media Matters founder David Brock fled when he was asked about the organization’s refusal to allow its employees to unionize.

Politico, the only other Washington news outlet that sent a reporter to the conference, received similar treatment from many attendees. A Democracy Alliance official reportedly grabbed the arm of Politico’s Ken Vogel when he tried to chase after Jonathan Soros for an interview.

When conference-goers were not participating in the closed-door sessions and nightly dinners, they were enjoying the amenities of the Ritz Carlton hotel, which is located at the top of the 74-story Water Tower skyscraper on Chicago’s Magnificent Mile.

In the art deco lobby, attendees such as left-wing financier Joe Zimlich and Center for American Progress president Neera Tanden milled around near an ornate fountain filled with rubber ducks.

A tired-sounding Alan Grayson, who is embroiled in a messy divorce involving bigamy and assault allegations, barked schedule changes into his cell phone in the lounge area, backlit by floor-to-ceiling views of the Chicago skyline.

David Axelrod dined at the hotel’s restaurant Deca, which had a sign outside advertising its $100 grilled cheese sandwich filled with "40-year aged Wisconsin cheddar infused with 24K gold flakes." 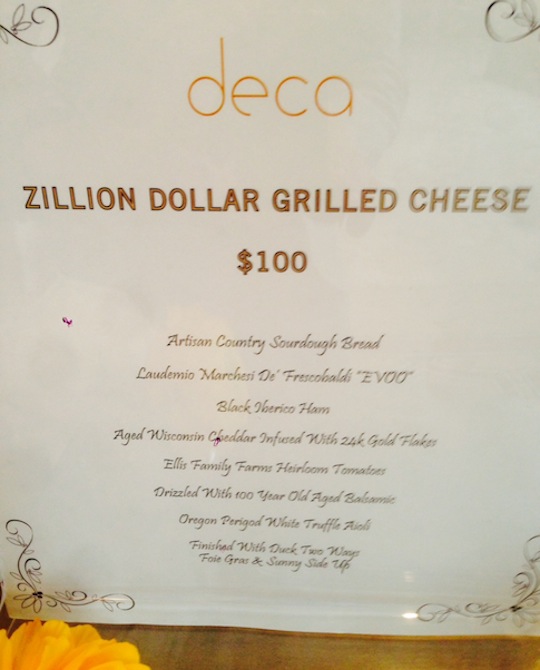 But back in Washington, not all Democrats were impressed by the Democracy Alliance’s track record over the past few years, saying its influence has waned in mainstream Democratic circles since President Barack Obama’s election in 2008.

"I don’t want to say it’s a joke, but it’s not on anybody’s radar, unless you’re [already] getting funding [from Democracy Alliance] or you want to suck up to the liberal base, the Graysons, the DeBlasios," one Washington-based Democratic operative told the Free Beacon earlier this week.

As to where more centrist Democrats were this week, the operative said, "anybody who’s anybody is at Milken [Institute Global Conference in Los Angeles]," referring to the annual economic summit that drew Former British Prime Minister Tony Blair, Los Angeles Mayor Antonio Villaraigosa, and top Democratic donor Jeffrey Katzenberg.

"That’s where you’re going to get the bigger names than in Chicago," he added. "It gets more of the heavyweights."