Brown, who has made frequent appearances in New Hampshire recently, has not ruled out running against Shaheen when she is up for reelection in 2014.

"The fact that [Brown] keeps a former governor and well-regarded United States Senator under 50 percent shows that that could be a true contest," said Kellyanne Conway whose firm, Polling Company, Inc., conducted the poll for the Free Beacon.

Conway said a Brown-Shaheen matchup could resurrect the healthcare debate that helped Brown win the Massachusetts Senate race in 2010, noting that the law will go into effect in 2014.

"[Brown] won running against Obamacare in [2008]," Conway said. "Senator Shaheen has never been held to account for her vote for Obamacare. And so that could be a really fascinating matchup."

Andrew Smith, the director of the University of New Hampshire Survey Center, was still skeptical about Brown’s chances, noting that he would have to overcome the perception of being an interloper in the state.

"I think that any candidate in any state who is seen as a carpetbagger … I don’t think that you can do a good job running in a neighboring state," Smith said.

Smith said the exceptions were candidates such as Hillary Clinton and Bobby Kennedy, who were able to run successfully in New York because of their celebrity status and the state’s heavily Democratic electorate.

The WFB poll also found that Sen. Kelly Ayotte (R., N.H.) has rebounded from an April dip in her poll numbers that was attributed to her vote against gun control legislation.

"I think Ayotte's improvement in her numbers relative to the PPP poll is a sign that the gun control debate did not have the salience that many on the left believed it would," said the Weekly Standard’s polling expert Jay Cost. "It makes sense that PPP would find such trouble for Ayotte, considering that their poll was taken toward the height of the controversy over the bill (not to mention its strong support in the Northeast). But now that public attention has turned toward other items, we see in this poll her numbers have rebounded."

Smith said he has not seen any indication that Ayotte’s numbers have been impacted at all by her gun control vote.

Smith added that an April poll conducted by his center also found "essentially no difference in favorability ratings for Ayotte," contrary to the conclusions from PPP’s April poll.

"[Sixty] percent of New Hampshire voters say that their opinion of Kelly Ayotte over the past couple of months has either improved or actually just stayed the same," said Conway. "And Shaheen [has] less movement, 18 percent gotten better, 58 percent stayed the same."

Conway said Shaheen’s numbers likely had less movement because voters have been familiar with her for longer than Ayotte and has kept a lower profile.

"[Shaheen’s] already there, she was governor of the state, people already know her, she hasn’t been the subject of controversy over the gun bill," Conway said. "So I think that Ayotte, frankly, is more than holding her own and treading water—she’s actually overcome."

The WFB poll found New Hampshire voters evenly split on President Barack Obama’s approval rating, with 50 percent approving of his performance and 49 percent disapproving, a drop from his approval rating in PPP’s April poll. According to Cost, this could have contributed to Ayotte’s rising numbers.

"What might be related here is the drop in approval for President Obama, from +6 in PPP's April poll to just +1 in this poll," Cost said. "In other words, as the news mixture has changed over the last month and a half, from stories largely favoring Obama to now disfavoring him, Ayotte may be benefiting indirectly. We've seen a similar shift in his nationwide job approval, per the RealClearPolitics average, and it stands to reason that Republican officeholders nationwide have gained some political space as a consequence." 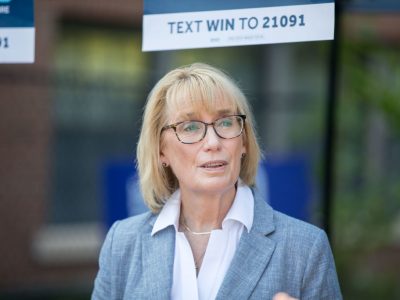