The president cited the reports to lend credibility to his assertions in the face of an aggressive, sharp challenger who regularly attacked the incumbent’s record.

The president made this claim regarding savings to Medicare:

And this is not my own—only my opinion. AARP thinks that the —the savings that we obtained from Medicare bolster the system, lengthen the Medicare trust fund by eight years. Benefits were not affected at all.

However, an AARP analysis of Obama’s Medicare plan just over a week ago undermined the president’s claim that he will not change benefits "at all":

If you are lucky enough to be financially comfortable in retirement, odds are you’ll pay higher premiums under President Barack Obama’s plan. It’s not just the 1 percent who’ll feel the pinch.

Former AARP CEO Bill Novelli said that changes to Medicare are inevitable. "Obama is going to have to raise the price of benefits," he said.

The morning after the debate, AARP released a statement distancing itself from Obama’s deployment of their analysis. John Hishta, AARP senior vice president, said in part: 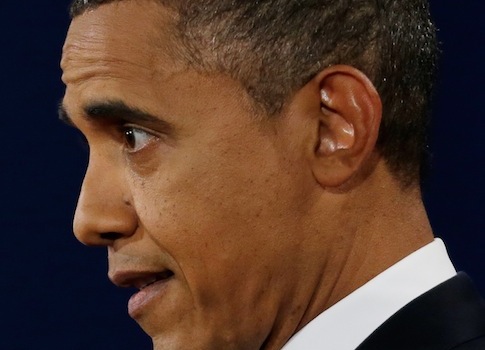 Obama did not cite a specific study, but the substance of his charge comes from a Tax Policy Center report. The report concludes that:

Alex Brill, a former chief economist to the House Ways and Means Committee now at the American Enterprise Institute, pointed out that the study has serious flaws that skew its results.

At the heart of TPC’s study, says Brill, lies the claim that "there are not enough tax breaks (excluding tax preferences for savings and investment) for high-income earners to offset the cost of the lower rates." This asymmetry, Brill says, leads TPC to the conclusion that "an $86 billion tax increase on the middle class" will balance lower rates for higher earners.

First, "More base-broadeners are on the table," says Brill. TPC revised its findings down by $45 billion after Brill’s colleague Matt Jensen critiqued the report, uncovering more options for raising revenue by broadening the base. This revision reduced the revenue gap that TPC found from $86 billion to $41 billion.

Third, Brill calculates that if the economy grows at a 0.1 percent faster rate, the government would take in $13 billion more in revenue, which would force Romney, if he were to remain budget-neutral, to give middle class earners a tax break.

"And just like that," Brill writes, "the Democrats’ attacks that Romney wants to raise taxes on the middle class become false."

Romney himself said Wednesday night that, while he would not raise taxes to increase government revenue, revenue would increase due to an improving economy: 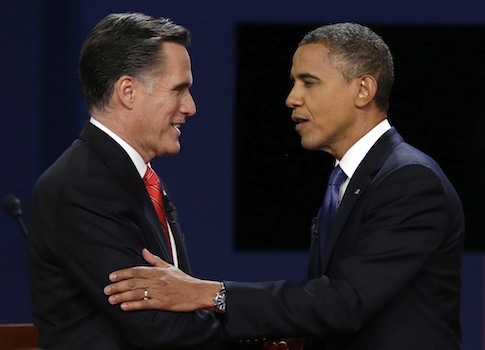 Obama said that his healthcare law, passed in 2010, is virtually the same as the healthcare legislation passed while Romney was governor of Massachusetts:

And I agree that the Democratic legislators in Massachusetts might have given some advice to Republicans in Congress about how to cooperate, but the fact of the matter is, we used the same advisers, and they say it's the same plan.

However, as Douglas Holtz-Eakin at National Review points out, the two pieces of legislation contain fundamental differences.

Both laws mandate that individuals buy health insurance, but the list of differences vastly outnumbers the similarities:

Additionally, while both plans seek to broaden health care coverage, they "are not even close cousins" in their details, Holtz-Eakin concludes.

Even the baseline environments for the two pieces of legislation were different, he says. "Massachusetts had a relatively low number of uninsured at the time of reform."