The Daily Show regularly manipulates photos for a punchline

MSNBC host Joe Scarborough expressed shock Wednesday at a purported quote taken from the phone call between President Donald Trump and Ukrainian president Volodymyr Zelensky that was actually from a parody transcript.

The Twitter account for Comedy Central's The Daily Show tweeted out a joke screenshot of the much-awaited transcript that appeared to show Trump floundering because he didn't know who he was talking to.

"It’s very impressive, what you’ve done, with that country, and the people of that country. Where it is. The people in the buildings, in that country. A wonderful place that I know very well – it has great roads and food. And I know what it is and who you are," it read.

Are we sure Trump knew who he was talking to on this call pic.twitter.com/1tgWxTthIc

The comedy talk show regularly manipulates photos for a punchline, but Scarborough apparently fell for the gag, sharing a sentence from the screenshot with a "mind blown" emoji. 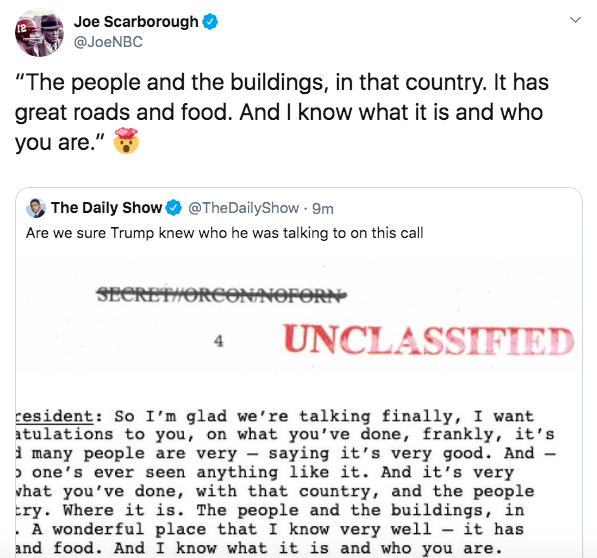 The Morning Joe host deleted his tweet without explanation after being called out by others on social media.

you know that's a joke, right?

Scarborough did keep up a tweet he sent a minute later asking of the Zelensky transcript, "Why did White House lawyers release this? It is damning."

Why did White House lawyers release this? It is damning.

WATCH: Disgraced FBI Agent Says ‘9/11 Is Nothing Compared to January 6’