University of California, Berkeley economists Emmanuel Saez and Gabriel Zucman have gained currency on the left for their proposed radical taxes on wealth and financial transactions. While Warren, Sanders, and other leading liberals rush to embrace them as advisers, a debate has roiled academic economics. The evidence on which Sanders, Warren, and others have built their plans to dramatically transform the U.S. economy may be shoddier than their supporters realize, according to some prominent Democrats who have called the research "substantially inaccurate and substantially misleading."

Both Warren and Sanders, neither of whom returned requests for comment, have promised to pursue aggressive expansions of government spending, with costs expected to run into the trillions of dollars. To finance this spending, both campaigns have floated novel tax proposals, including Sanders's financial transaction tax and Warren's corporate profit tax. The most ambitious of these proposals, however, is each campaign's wealth tax—a tax levied directly on the assets of the super-wealthy.

Both proposals, according to information released by the campaigns, are the brainchild of Saez and Zucman. The two coauthored letters on behalf of Warren and Sanders touting the plans, and have since made media appearances pushing for increased consideration of a wealth tax. They also have advocated for other policies embraced by both Sanders and Warren, including a recent op-ed claiming that Medicare for All will cut taxes for most Americans—even in spite of Sanders's acknowledgment that tax hikes for the middle class would be needed to pay for his plan.

Both Saez and Zucman's research focuses on tax policy and inequality. They have also previously teamed with Thomas Piketty, the French economist whose best-selling Capital in the Twenty-First Century made an international splash when it debuted in 2013. Their prominent role as Democratic advisers—alongside glowing reviews of their new book—has put them front and center in the 2020 policy conversation. 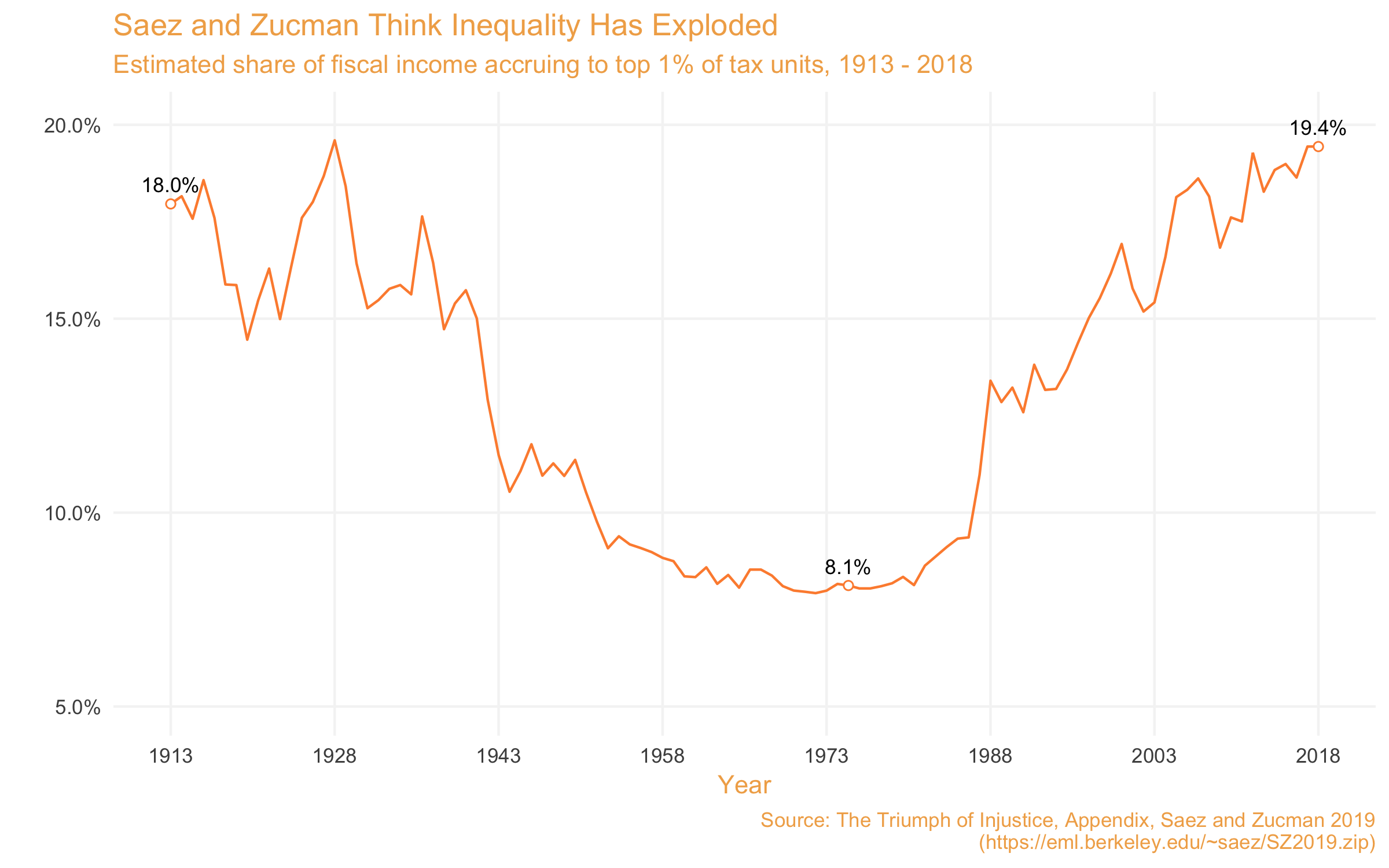 Saez and Zucman's analysis of income and tax distributions indicates that inequality has skyrocketed: The data used in their new book indicate that as of 2018, the top 1 percent of tax filers collected 20 percent of the income, up from 8 percent in the 1970s. At the same time, their research (as captured in a recent viral New York Times chart) indicates that the U.S. tax system is actually regressive, with the top 400 tax filers paying a lower total tax rate—including state, local, and federal taxes—than those in the bottom 10 percent of earners.

If true, these findings support Zucman's claim in a recent interview with Axios that "[y]ou look at the numbers and it's very similar to the Gilded Age." They also can be used to support the tax policy that Saez and Zucman designed for the Warren and Sanders campaigns. Their influence extends beyond presidential politics. The pair publicly defended Rep. Alexandria Ocasio-Cortez's (D., N.Y.) call for a 70-percent top tax rate.

The pair's public elevation has brought with it massive scrutiny, and many economists think their work does not hold up.

The dispute over Saez and Zucman's work is intensely technical, but it more or less boils down to the fact that calculating income distribution and tax incidence both necessarily require making a host of methodological choices. Wherever possible, Saez and Zucman make the choice that in some cases radically overstates inequality compared to other academic estimates.

For example, the pair chose to focus on inequality among "tax units," meaning discreet tax returns, which are not necessarily the same with individuals (because of jointly filing couples) or households (because of dependents who file separately). Research indicates that the income distribution for tax units is more inequitable than among households or individuals.

In the case of tax burden, there's the question of how to distribute the weight of corporate taxes—Saez and Zucman assume that they fall totally on corporate shareholders, meaning that the gains from cutting them accrue entirely to these—usually wealthy—actors, as opposed to workers.

There are lots of other, similar choices that Saez and Zucman make. Shifting those variables could yield research that finds inequality has barely budged, or that the tax system is actually quite progressive. Gerald Auten and David Splinter, economists at Congress’s Joint Committee on Taxation and the Treasury Department’s Office of Tax Analysis, found that the top 1 percent's share of after-tax income only rose from 8.4 percent in 1979 to 10.1 percent in 2015—less than a third of the increase that Piketty, Saez, and Zucman found in 2017.

Splinter also recently responded to Saez and Zucman's finding that the tax system is flat, identifying "three issues"—an over-allocation of underreported income to high earners, a misallocation of retirement income, and excluding the value of after-tax wealth transfers—which, when removed, produce the progressive tax system that most other estimates find. 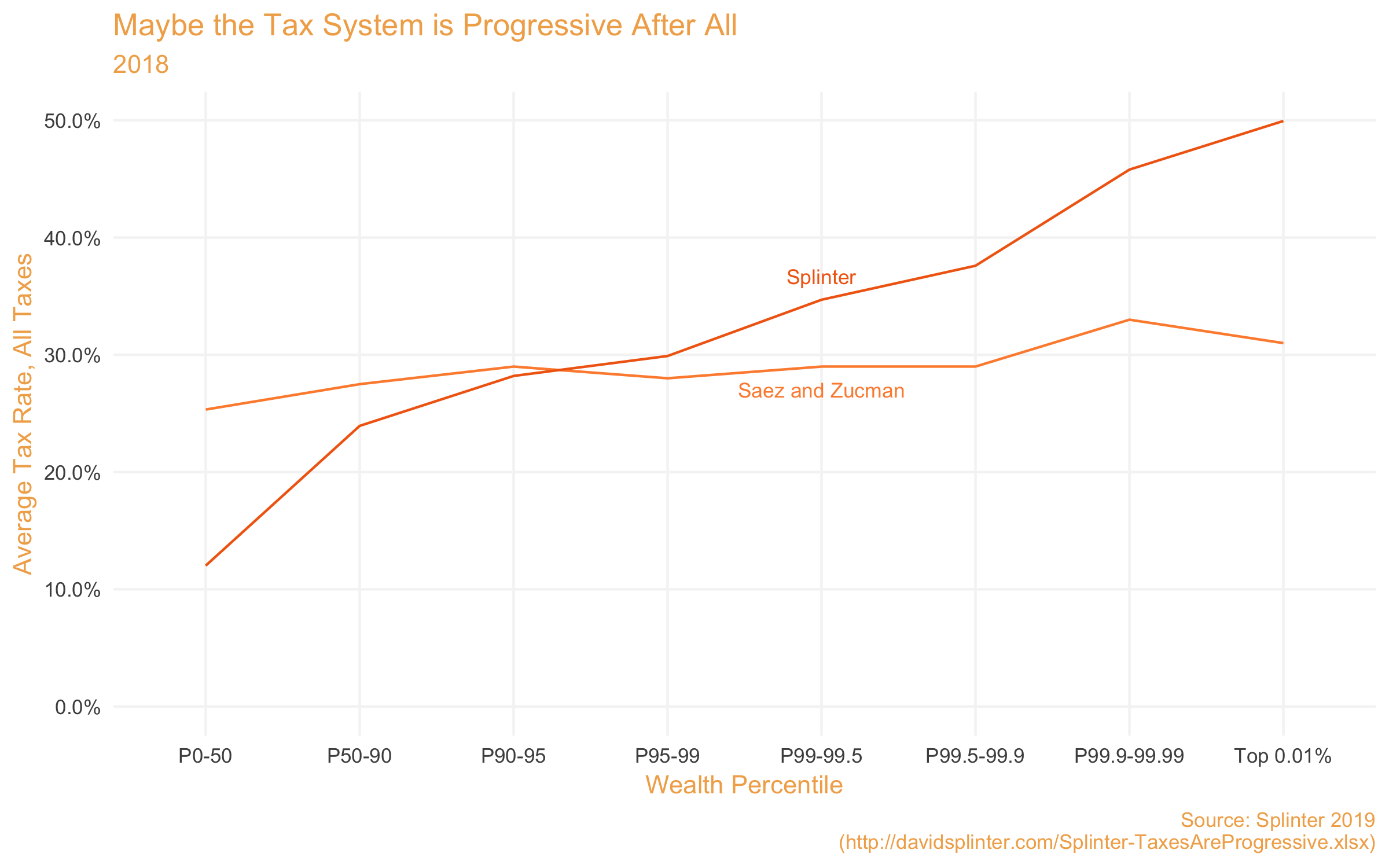 When the pair were reached for comment about these criticisms, Zucman directed the Washington Free Beacon to the frequently asked questions page of the website for their new book. On it, Zucman and Saez respond to some of the above objections, in particular their choice not to include transfers in their calculations (which they describe as "somewhat arbitrary" for their purposes). Zucman declined to comment on the 2020 primary or the influence he and Saez have had on it.

These disparities may be why even liberals have been critical of Saez and Zucman. Jason Furman, who ran the Council of Economic Advisers under Obama, noted that "the standard data show that the tax system overall is highly progressive." Larry Summers, former Clinton treasury secretary and Obama director of the National Economic Council, called Saez and Zucman's estimates of tax inequality "substantially inaccurate and substantially misleading."

All of this may seem like a petty dispute among academics. But Saez and Zucman appear to have real influence in the 2020 debate, pushing for a tax that some experts, including Summers, have said would likely be unconstitutional, impossible to administer, and ineffective, pointing to numerous European countries that ditched wealth taxes after seeing them hurt the national economy.

The wealth tax has become a key plank to Warren's campaign, with supporters chanting "two cents!" at rallies, in reference to the two cents taxed on every dollar over $50 million held. These supporters probably have not heard from Summers, or Splinter, or any of Saez and Zucman's other critics. Warren may have, but it is clear to whom she chooses to listen.