Nazi cosplay actors could end up being some of the biggest winners of the 2022 midterm elections. Several months after the Lincoln Project helped Glenn Youngkin (R.) win the Virginia gubernatorial election, the disgraced super PAC's senior adviser announced the launch of another Nazi-themed political stunt.

The Beer Hall Project, which declared its existence last week by asking for money on the anniversary of the January 6 uprising, was founded by the Lincoln Project's Fred Wellman and Cyrus Shick, a longtime Democratic operative who worked for former senator Claire McCaskill (Mo.) and Sen. John Hickenlooper (Colo.), as well as failed candidate Beto O'Rourke.

The new project, whose name "directly invokes the infamous Beer Hall Putsch of 1923 and its aftermath," will attempt to combat political disinformation by frequently comparing the modern-day Republican Party to the Nazi Party under Adolf Hitler. For example, the group's website suggests that the Georgia state legislature's vote to enact slightly controversial voting reforms in 2021 was the modern-day equivalent of Hitler being sworn in as chancellor of Germany in 1933.

The group's first video, narrated by Hollywood actor Edward Norton, urges Americans to act by donating money or risk another Holocaust. "There is a familiar rhythm to what happened there and then and what's happening here and now," Norton says in the video, which juxtaposes images of Nazi rallies with clips from CPAC. "It cost millions of lives to stop [the Nazis] once they got rolling. The question is, will we stop [the Republican Party] now?"

In an interview with the St. Louis Post-Dispatch, the project's founders cited "disinformation" as one of the main obstacles to solving our nation's political problems. In an effort to demonstrate how serious they are about the Beer Hall Project's noble mission, the group's Twitter account promoted a debunked false claim about Supreme Court justice Neil Gorsuch and has yet to correct the record. 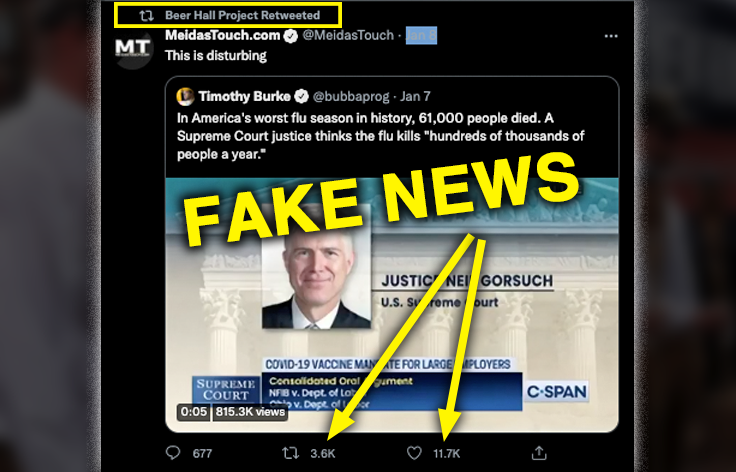 Like the Lincoln Project, which has come under fire for being a shameless grift run by talentless hacks who protected a sexual predator, the Beer Hall Project is firmly aligned with the Democratic Party. The group is raising money using ActBlue—the party's near-monopoly fundraising platform. Despite continuous attempts by the media to label the Lincoln Project as a Republican group, it was founded using the Democratic Party's data vendor and bank, both of which continued doing business with the group in the wake of the scandal that involved disgraced cofounder John Weaver, who groomed boys as young as 14 years old.