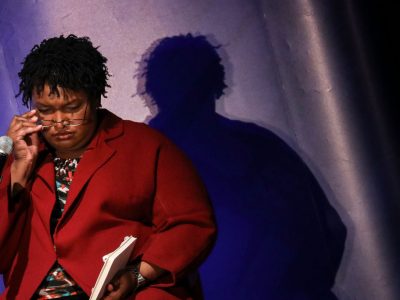 Embattled Stacey Abrams Group Could Be Fined for Missing Financial Disclosure. It Doesn't Seem To Care.

Burchett, a member of the House Foreign Affairs Committee, says that ActBlue—an online donation portal that primarily services liberal and Democrat-aligned organizations—could be violating U.S. anti-terrorism laws by facilitating donations to the Palestinian Campaign for the Academic and Cultural Boycott of Israel (PACBI), an anti-Israel organization that plays a central role in the Boycott, Divestment, and Sanctions movement.

PACBI continues to be listed as a partner organization on ActBlue's website, despite being alerted earlier this month of PACBI's ties to foreign terrorist organizations. The Zachor Legal Institute, a think tank that combats anti-Semitism, informed ActBlue's leadership that PACBI is "a hate group that is controlled by a coalition of organizations that the United States and other countries have designated as foreign terror organizations."

ActBlue's ongoing partnership with PACBI "is a flagrant violation of ActBlue's terms of service, but I am more troubled by the fact that PACBI works closely with the Palestinian BDS National Committee," Burchett wrote, according to a copy of the letter obtained by the Free Beacon. "The BNC is basically an umbrella organization for foreign terrorist groups such as Hamas and Palestinian Islamic Jihad."

Burchett said he is "worried that funds donated to PACBI via ActBlue are, through BNC, directed to foreign terror organizations."

ActBlue's partnership with PACBI is a sign of the growing influence the BDS movement is gaining in the Democratic Party and the liberal community that supports it. ActBlue is viewed as the central fundraising platform for Democratic politicians and far-left groups, such as the Black Lives Matter movement. The platform was recently fined $3,300 by the Federal Election Commission for funneling illegal political contributions in the 2020 election cycle.

Burchett maintains the Biden administration must investigate ActBlue to determine if it is violating U.S. anti-terrorism laws by funneling donations to PACBI.

"Anti-Semitism and terrorism have no place in the United States, so I am hopeful your departments will investigate how funds are directed by these groups," the lawmaker wrote. "If donations are indeed winding up in the hands of terrorist organizations, you should do everything in your power to put an end to this and bring those responsible to justice."

PACBI is one of several foreign organizations that comprise the global BDS movement's advocacy network.

Multiple online companies, such as Zoom, YouTube, and Facebook, have banned BDS supporters from their platforms for promoting hate speech and anti-Semitism. ActBlue's own terms of service include similar prohibitions against hate speech.

"As a terror-backed hate group, PACBI's activities constitute a violation of ActBlue's terms of service, as ActBlue does not allow illegal, obscene, threatening, defamatory, or otherwise injurious content," according to the Zachor Legal Institute. "PACBI's role in the governing body of the BDS movement implicates it as violating various anti-discrimination [laws], including state anti-BDS laws."

ActBlue did not return a request for comment from the Free Beacon.

Embattled Stacey Abrams Group Could Be Fined for Missing Financial Disclosure. It Doesn't Seem To Care.