As top state energy official, McGinty met with green firm in hopes of landing board seat

Katie McGinty used a taxpayer-funded trip to California to meet with a green energy company that she believed could put her on its board of directors once she entered the private sector, according to email records from McGinty’s tenure as secretary of Pennsylvania’s Department of Environmental Protection.

McGinty, the Democratic candidate for Senate in Pennsylvania, has taken heat for her quick transition from the public sector to lucrative positions at top energy companies. The emails show that McGinty spoke openly about life after government during her final months on the job—including to her former boss, Al Gore.

In a 2008 email to the former vice president, who first hired McGinty to work in his Senate office and then brought her along to the White House, McGinty tried to obtain information about new solar technology that she hoped could help her potential future employers.

"Can’t sleep," began McGinty’s 3:36 a.m. email to Gore, who was running green energy investments for the venture capital firm Kleiner Perkins Caufield & Byers. "I am back to thinking about csp [concentrated solar power]." McGinty was concerned about the "microclimate impact," "bird impact," and regulatory challenges of the energy generation method.

McGinty added that she hoped to be put on the board of energy companies, and planned to give them a competitive advantage over other firms by sharing her concerns about concentrated solar power.

One of those firms, the solar company Ausra, happened to be in Gore’s portfolio at Kleiner Perkins.

"Anyway, if I do serve on the bd of one or another of these companies (as you know KP [Kleiner Perkins] has Ausra in its portfolio and I am due to meet w the CEO of that company), I wld aim to help the company convert early awareness of these issues to a competitive advantage," she wrote to Gore. 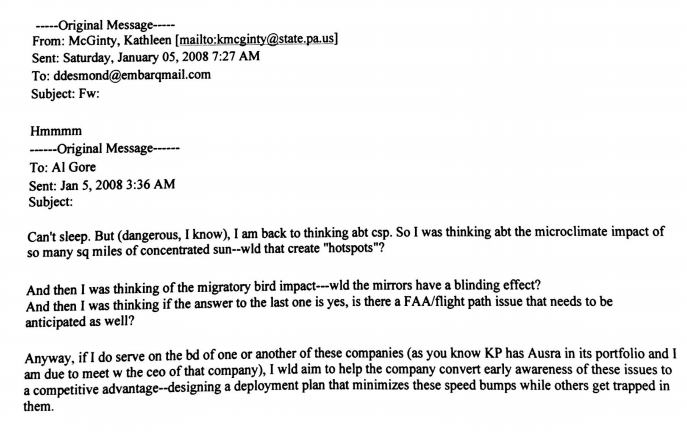 McGinty traveled to California three weeks later for the meeting with Ausra—but she didn’t make the trip on her own dime.

Email records show that McGinty met with Ausra and two other energy companies in Gore’s green energy portfolio during a business trip planned by Pennsylvania public employees and paid for with Pennsylvania tax dollars.

The Department of Environmental Protection flew McGinty to San Diego to speak at a conference on Jan. 30, 2008, according to flight confirmation emails obtained by the Washington Free Beacon.

McGinty stayed in San Diego that night but took a flight to San Francisco the next day to meet with green energy companies associated with Kleiner Perkins.

Emails show that Kleiner Perkins worked closely with McGinty’s assistant at the state agency to arrange for her to be picked up from the airport in a private limousine and brought to a Thursday afternoon meeting with John Denniston, a top executive at the venture capital firm.

The same limousine company was hired on Friday to shepherd McGinty to meetings with three Kleiner Perkins "portfolio companies"—Bloom Energy in Sunnyvale, Amyris Biotechnologies in Emeryville, and Ausra in Palo Alto—and then return her to San Francisco’s Palace Hotel, where she was staying.

Records show that Kleiner Perkins offered to foot the bill for McGinty’s ground transportation in San Francisco, a fraction of the trip’s total cost. The rest was paid for by Pennsylvania taxpayers.

It cost $847.52 for McGinty to stay at the Palace Hotel, according to records. The hotel stay lasted until Sunday even though McGinty had no scheduled meetings over the weekend.

McGinty’s flights for the trip, including the side trip to San Francisco for the Kleiner Perkins meetings, cost an additional $713.50.

A spokesperson for the McGinty campaign did not explain how any of the meetings McGinty attended in San Francisco concerned Pennsylvania, but insisted that they were part of her job.

"As Environmental Secretary, Katie's job was to work with energy companies around the country to invest in Pennsylvania," said McGinty spokesman Sean Coit. "In fact, during her tenure, she attracted $1 billion in investments to Pennsylvania and helped bring 3,000 jobs to the commonwealth."

"After all the ethics scandals that have come out about Katie McGinty using taxpayer dollars to benefit herself and further her own career, this latest revelation is very concerning," said Ted Kwong, a Toomey spokesman. "Katie McGinty owes Pennsylvania taxpayers an explanation for her actions while in office."

Coit dismissed concerns that McGinty appears to have used an official business trip to further her private, professional career.

"Unsurprisingly, the Free Beacon is desperate to find conspiracy in anything a Democratic candidate does," Coit said.

McGinty was not given a position at Ausra, which turned out to be a failed investment for Gore and his firm, but she met with other companies during her time in state government that did hire her.

A few months after McGinty’s California trip, she held back-to-back meetings with two firms, NRG Energy and Iberdrola, which placed her on their boards after she resigned from state government that year.

The Department of Environmental Protection spent $524 on the limousine that transported McGinty to the New Jersey headquarters of NRG Energy, a company that paid McGinty $1.1 million over the next five years.

With NRG Energy, McGinty got her wish of being on the board of a company involved in concentrated solar power technology, but she failed to give her firm a "competitive advantage."

Even with a $1.6 billion grant from the government, the project has produced far less energy than expected and may be shut down. McGinty’s concern about the migratory bird impact of the solar technology also failed to make a difference—NRG’s Ivanpah plant has burnt thousands of birds to death.

A conservative group announced on Wednesday morning that it would spend $1 million on an ad that illustrates how McGinty "used her public position to get ahead at Pennsylvania’s expense." 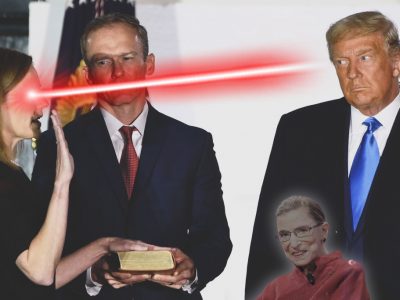