Josh Hawley Versus the Machine

If you were looking for a David to the multi-billion-dollar, big-tech Goliath, you could do worse than Sen. Josh Hawley (R., Mo.).

Since arriving to the Senate in January, Hawley has made a name for himself as a Silicon Valley skeptic. In March, he attracted attention for his heated cross-examination of Google executives. And in May, he delivered a provocative speech at the Hoover Institution in which he called "the entire social media economy" a "source of peril" for America.

Hawley has also put his legislation where his mouth is. He has floated four separate bills meant to regulate tech: an update to the Children's Online Privacy Protection Act, a federal Do Not Track right, a limit on how video sites serve content containing children, and a ban on "loot boxes" in video games marketed to kids.

This last bill, in particular, has attracted derisive attention from critics, who dismiss it as of a kind with the craze for video-game regulation in the 1990s. Video games, social media—is it really fair to bring so much rhetorical and legislative pressure to bear on toys and sites for chatting with your friends?

But, as he explained in a wide-ranging conversation with the Washington Free Beacon, Hawley views his legislative work as part of a deeper critique of how tech firms, often heralded as the future of America, have designed a profit model driven more by addiction than innovation.

The business models of many tech companies do differ radically from those of traditional firms. When we interact with real-world businesses, we usually trade money for whatever they sell, whether it is a hamburger or repairs to your house. But many popular tech products, like Facebook and YouTube, provide their content to users for free and make their profit off collecting data and then serving personalized ads. Video games increasingly work in much the same way, providing a "free-to-play" experience that users can really only compete in if they buy in-game content.

Hawley's view is that this profit model naturally lends itself to practices that encourage addictive behavior. Thus loot boxes: cheap in-game items that cost money to open, which randomly spit out an item, usually worthless but sometimes rare. The concept, which encourages users to buy many boxes to get a sought-after in-game prize, is reminiscent of casino slot machines. The result, as tech site the Verge recently documented, is that players can spend thousands of dollars on games that are nominally "free."

Hawley is not the only one concerned about this dynamic. His loot box bill is co-sponsored by two Democrats, Sens. Ed Markey (Mass.) and Richard Blumenthal (Conn.). Sen. Maggie Hassan (D., N.H.) told the Verge that she is also interested in more regulation. And overseas, fifteen members of the Gambling Regulators European Forum signed a letter in September saying they fear the risks of "blurring of lines between gambling and other forms of digital entertainment such as video gaming."

Most of Hawley's proposals are specifically aimed at restricting tech firms from reaching children. As he put it, he wants to stop firms from "exploiting children by putting little casinos on their phones…to make a buck," emphasizing that "we don't allow casinos to target children and minors." Kids have been known to spend thousands of dollars (or pounds) of their parents' money on in-game purchases.

But risks to children are only one part of a bigger picture for Hawley. After all, social media's profit model is not so dissimilar from the harmful dynamics he has identified in video games. The whole business is built on selling personalized ads to users (kids and adults). To do this, and to collect the data needed to personalize ads, social sites need to keep users clicking.

"The thought process that went into building these applications, Facebook being the first of them, … was all about: ‘How do we consume as much of your time and conscious attention as possible?'" Facebook co-founder Sean Parker told Axios in a 2017 interview. "[Features like likes and comments are] exploiting a vulnerability in human psychology."

"When it comes to social media companies," Hawley said, "they make sure that they're getting the maximum attention of kids—and adults, too—getting them to spend as much time as possible on their platforms, so that they can extract as much personal information as possible, monetize that, and of course have a wide audience for their ads. This is the model that they've developed and we need to do better." 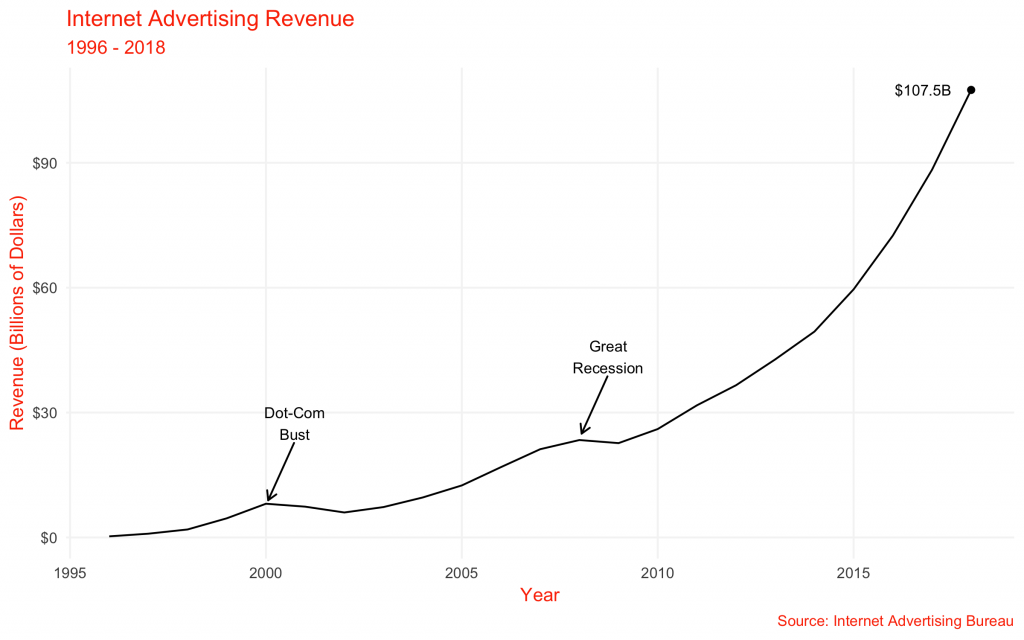 This model is enormously profitable, to the tune of $100 billion dollars in 2018. But it's also seen big tech mired in controversy, most recently when New York Times reporting discovered that YouTube's recommendation algorithm was helping pedophiles identify videos of children. (As mentioned, Hawley has a bill to fix that.) But even for normal people, algorithms designed to keep you clicking will inevitably reward compulsive behavior.

This is especially problematic because of social media's ubiquity. The Pew Research Center found that at least 75 percent of Americans use social media; majorities report checking sites like Facebook and Snapchat "several times a day"—the most frequent usage option Pew asked about. When 81 percent of Americans own a smartphone, tech firms are, as Hawley put it, "omnipresent in American life."

This enormous reach, and massively profitable business model, has allowed large tech firms to accrue a great deal of financial power. And they are mobilizing to convert that into political power: As the New York Times recently reported, just four firms—Amazon, Apple, Facebook, and Google—spent a combined $55 million on lobbying last year alone.

With this "lobbying army" will come arguments that tech firms are this century's exemplars of American innovation. And that is the heart of what has Hawley up in arms.

"Big tech has held itself out as the model of the American future, and as the model of the future economy. So I think we need to ask some hard questions there about what future it is that they are presenting to us," Hawley said. "Is it a future built around an addiction economy? Is the great innovation that we've promised for all these years really just souped-up ad-based platform?"

"Is that going to be the great innovation of the 21st century?" he asked. "I certainly hope not."