Church saw a weak mud wall on the edge of town, and aimed to lead his platoon to safety by breaking through it. As they pounded at the structure Church's world went dark.

"I open my eyes and I see dust swirling in front of me," he tells a group of veterans at a Veterans of Foreign Wars meeting near his home in northern Wisconsin. "As I begin to hear the screaming and shouting of my men, I roll on my back and realize the legs I stood on for the first 23 years of my life were no longer there."

Church credits his survival to his men. His platoon set up a perimeter to stop the Taliban's planned ambush. A medic ran through the minefield to apply the tourniquets that stopped him from bleeding to death. He was carried off the battlefield in his men's arms.

"My battle in Afghanistan was done, but a new one began," Church says.

The next battle took place at the Walter Reed Military Medical Center, where Church underwent 20 invasive surgeries, was fitted with two prosthetic legs, and had to teach himself to walk again. Now Church walks a district in one of the coldest areas of the United States, hoping to become the 97th veteran in the 116th Congress. 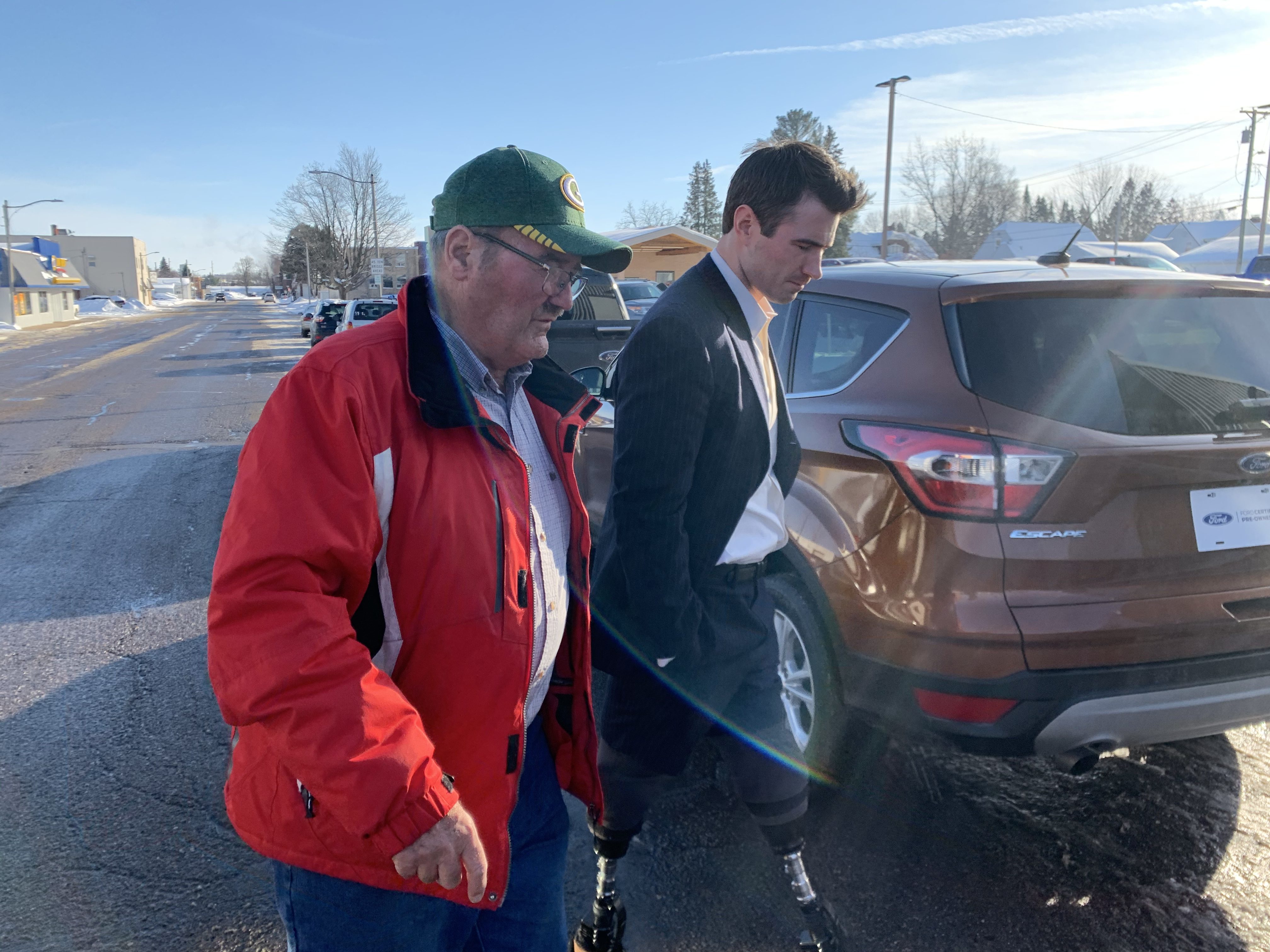 He majored in political science but never considered a career in politics. Instead he followed in the footsteps of his father and grandfather and went to Army Ranger School immediately after college. At 23, he deployed to Afghanistan as a platoon leader, finding himself in the minefield just three months into his unit's tour.

At Walter Reed during his recovery, Church was visited by Wisconsin senator Ron Johnson. The Republican senator said he never got the sense that Church had "an eye on running for office," but Church left an impression.

"I recognized right away that this was an extraordinary young man," Johnson told the Washington Free Beacon. He ended up bringing Church on board to help his office with foreign affairs and veterans' issues.

Church worked in Johnson's office as he obtained a degree in national security policy from Georgetown and also after moving back to Wisconsin for law school. After earning his law degree, Church moved to Hudson, a town close to where he grew up in Menomonie. He proposed to his girlfriend, a Brazilian native named Bella Barbosa, and planned to find work in the private sector. Life took another turn when Republican congressman Sean Duffy announced in August he was stepping down, opening up a vacancy in Church's home district.

"I wanted to serve our country in uniform, but things changed and I couldn't do that anymore," Church says. "Even though the Taliban took my legs, America's enemies did not extinguish my desire to serve. I want to give back to our country right now and I feel we need fighters in Washington." 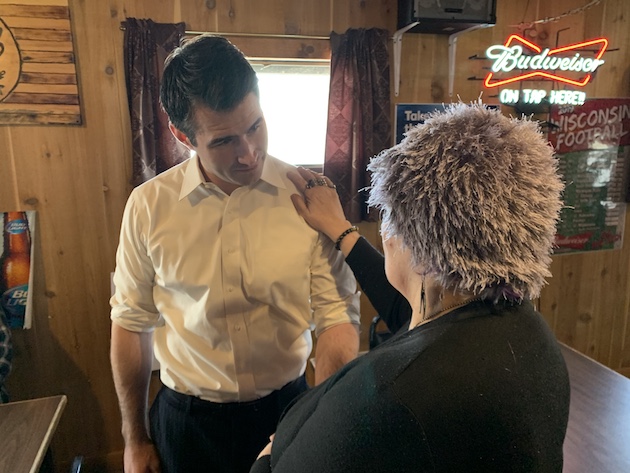 Jason Church talks with a voter in Cadott / Free Beacon

Church is running in a special election to represent Wisconsin's largest district, which encompasses nearly the entire northern half of the Badger State. The rural and sparsely populated district is a challenge to campaign in—especially in the heart of winter.

A typical day on the trail begins at 7:30 a.m. as the temperature hovers at -5°F without wind chill. Church emerges in a white dress shirt and a dark pinstripe suit—about seven layers fewer than Washington, D.C., reporters require. He wears a Purple Heart on his suit lapel and his two prosthetic legs are visible for all to see.

Church does not just rely on his own wartime heroism to woo voters. He speaks passionately and in detail about a range of issues, from immigration reform to trade negotiations with China. On the need to trim the bureaucracy, he laments the red tape he dealt with to get his Brazilian fiancée a visa. On the importance of fighting Medicare for All, he discusses his own experience dealing with government-provided health care at Veterans Affairs hospitals.

His most common refrain, however, is that he's not a career politician.

"I'm not a career politician, and I never thought in my life I'd run for political office," Church says.

Church's Republican primary opponent is state senator Tom Tiffany, who served stints in both the upper and lower chambers of the Wisconsin legislature. Tiffany has the public backing of the state Republican establishment, winning endorsements from both outgoing congressman Duffy and former governor Scott Walker.

"There's part of me that would be shocked if somebody who was in the state legislature didn't have the support of the establishment," Church says.

The big question is whether the establishment's support carries weight in the seventh district. 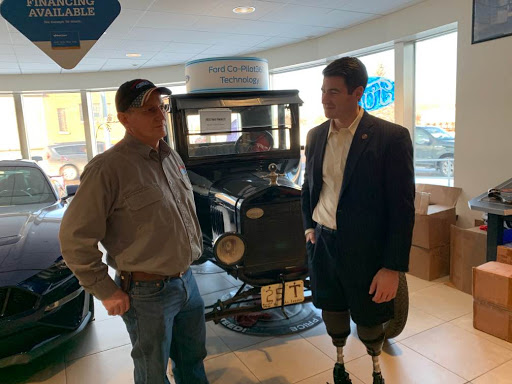 The 2016 Republican primary revealed a huge regional divide within Wisconsin—Donald Trump had a negative 39 percent favorability rating with Republican voters in the southeastern region of the state around Milwaukee, but a positive 21 percent rating in the rural north. The state's Republican establishment backed Ted Cruz, who won the primary, even as Trump overwhelmingly carried the northern part of the state.

Trump went on to become the first Republican to carry Wisconsin in a general election since Ronald Reagan in 1984. At the heart of his narrow triumph were voters in the Seventh Congressional District.

Election results compiled by Daily Kos show Trump beat Hillary Clinton by 20 points in the district, making it his strongest district in the state. In 2012, Mitt Romney won the district by just 3 points, while Barack Obama carried the district in 2008. The voters of Wisconsin's seventh district are the exact type that fueled the Republican resurgence in the Midwest, and helped put Trump in the White House.

Church says local residents remain committed Trump supporters and have a visceral reaction to attacks on the White House, particularly impeachment, because they view themselves as a big part of his victory.

"This was an early part of Trump's support base, and a lot of people here take it personally," Church says.

Tiffany, a state legislator during the 2016 primary, decided to stick with the establishment, although he knew where the tide was going in his home district. The Wall Street Journal reported ahead of the primary that Tiffany was backing Cruz "even though he said he expects his constituents to back Mr. Trump."

"My opponent has generally been someone who takes his marching orders from southeast Wisconsin," Church says. "They have a different set of values than we do up here in northern Wisconsin."

In addition to his support from the Wisconsin political establishment, the longtime state legislator enjoys the backing of Club for Growth and the Charles Koch network, two conservative groups that opposed Trump's election in 2016. Church makes his early support for Trump a sticking point in his pitch, pledging to be a much-needed fighter in the president's corner.

Church decries the "backpedaling" he sees from Republicans, saying too many find themselves perpetually on the defense. Voters, he adds, "don’t like to see their leaders take it on the chin every day."

"That's why we elected Trump together, that's why I supported him since he announced his candidacy," Church tells a group at the MCB Bar and Grill in Cadott. "For too long we've had people that are defensive. What we need is a loud voice to fight back."

Church argues that northern Wisconsin in particular needs a loud voice to avoid being drowned out by urban and suburban districts.

"This district doesn't have the luxury of getting what it needs without an adamant fighter for it," Church says. "In order for this district to be heard, the person representing it needs to be far more vocal than normal." 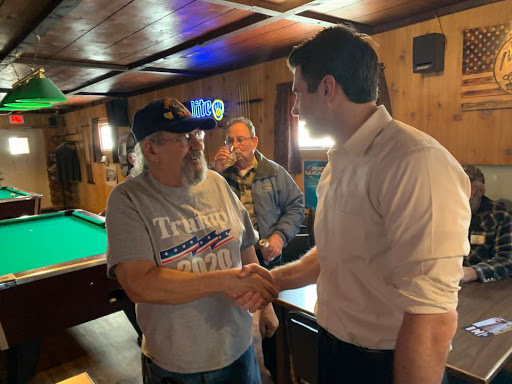 Many Republicans, including Church's former boss Ron Johnson, are choosing to remain neutral in the party's primary. While few find anything wrong with Tiffany, there is a growing sense that voting for him would be a lost opportunity for the district.

"Nothing against him, but there's already 150 to 200 Tom Tiffanys sitting anonymously in the House," said one state Republican who has publicly remained neutral and asked not to be named. "Wisconsin has a chance to send a leader to D.C. who can help shape policy debates and Church seems more suited to that role."

There has been virtually no public polling in the seventh district, and the first fundraising disclosures released late last week found the money race to be tight, though Church outraised Tiffany by about $163,000 in the most recent filing period.

Both campaigns, and their supporting groups, are up on the airwaves with political ads, hoping to raise the candidates' name recognition. Church says all he can do is continue his long days on the trail and get his message to as many people as possible.

Church says his first political run has been a challenge, but is just thankful to be standing where he is after what he went through less than a decade ago. He is thankful for the support his campaign received from fellow veterans—not just his new allies in Congress like Cotton and Crenshaw, but also the ones in his home district. He credits veterans like the ones he meets with at Veterans of Foreign Wars for the life he's been able to live since coming home.

"It wasn't always the case that a wounded veteran from a foreign war would come home to the respect this country owed them," Church says to the group. "I'm able to do and move and live life to the fullest thanks to people like you."

"It's people like you who have me standing here today."

The special election is scheduled for February 18.

Mandela Barnes Talks Up Support for Israel on the Campaign Trail. He Doesn’t Mention His Membership in a Vocal Anti-Israel Group.