After bashing the Trump administration's position on the unrest in Venezuela, Rep. Ilhan Omar (D., Minn.) on Friday retweeted and liked praise from a host on a Venezuelan state-run television station.

The United States led the way in recognizing opposition leader Juan Guaido as the head of Venezuela, after President Nicolas Maduro won an election that international observers described as fraudulent. "I will continue to use the full weight of United States economic and diplomatic power to press for the restoration of Venezuelan democracy," Trump said in a statement.

But several members of Congress, in particular Democrats affiliated with Democratic Socialists of America, dissented from the decision. Omar tweeted Thursday that the U.S. was backing a "coup" in Venezuela to "install a far right opposition."

A US backed coup in Venezuela is not a solution to the dire issues they face. Trump's efforts to install a far right opposition will only incite violence and further destabilize the region. We must support Mexico, Uruguay & the Vatican's efforts to facilitate a peaceful dialogue.

In fact, Guaido's opposition party Voluntad Popular is considered center-left and is a member organization of the Socialist International.

Less than an hour after that tweet, Omar retweeted a Jan. 11 tweet by journalist Abby Martin, who shared a video from her show "Empire Files" claiming "Trump is Expanding the US Empire." 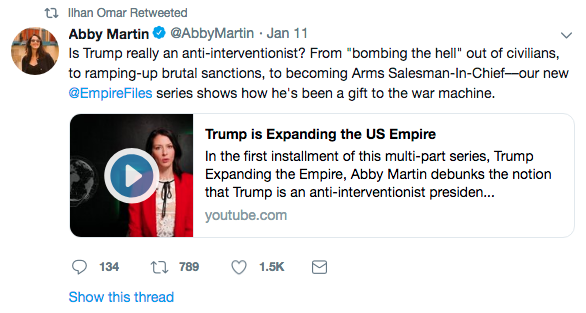 Martin is a host for TeleSur English, a TV channel founded by socialist revolutionary Hugo Chavez and funded in part by the Venezuelan government. The rest of TeleSur's funding comes from other leftist Latin-American countries such as Cuba, Bolivia, and Nicaragua, but the Venezuela government maintains a 51 percent ownership stake.

Martin previously worked at Russian state TV and propaganda outlet RT America. She made national news during the 2014 Russian invasion of Crimea when she criticized the invasion on-air, but the praise was short-lived after the New York Times reported she had a long history in the 9/11 Truther movement.

Ilhan also approvingly shared a tweet from Rania Khalek, a reporter for In the Now, a viral media company that's also funded by the Russian government. Omar commented on her retweet with a clenched-fist emoji.