Feature: What I saw at the Wendy Davis estate sale

FORT WORTH, Texas—Much to my surprise, I had company waiting outside the house of Wendy Davis early last Friday before the doors opened at 10:00 a.m. for her estate sale in Fort Worth, Texas.

I felt bad misleading the group of nice women who joined me in the small patch of warm sun on Davis’ driveway, but really had no choice—I couldn’t stomach the embarrassment of admitting I showed up an hour and a half early for a 52-year-old woman’s attempt to unload her extensive collection of clothes and jewelry. So I told them that I thought it started at 9:00 a.m.

I was the first person there and, despite my insecurities, nobody judged me for it. "I can't believe we're the only ones here," said the first person to join me. "I thought there would be a line out the door!" 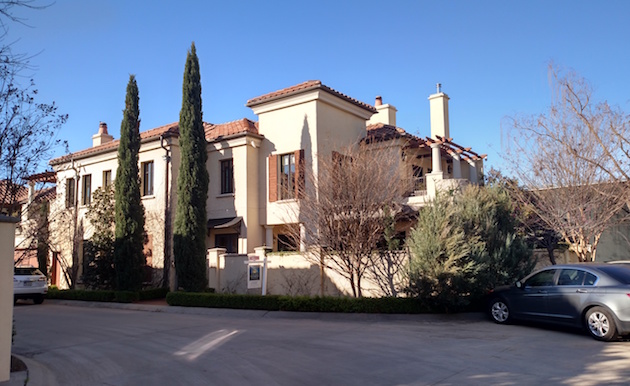 My new friend is a dealer that goes to these sorts of things regularly. I told her I had never been to an estate sale before and had no clue what to expect.

The costume jewelry is where the crowd will rush first, I was told. I acted interested in an effort to not show my hand, but I knew what I wanted—the pink sneakers she wore during her 11-hour pro-abortion filibuster.

I first saw the shoes last Thursday when Paula Brittain So7, a company specializing in estate sales, advertised the sale at Davis’ house on EstateSales.net and posted this picture: 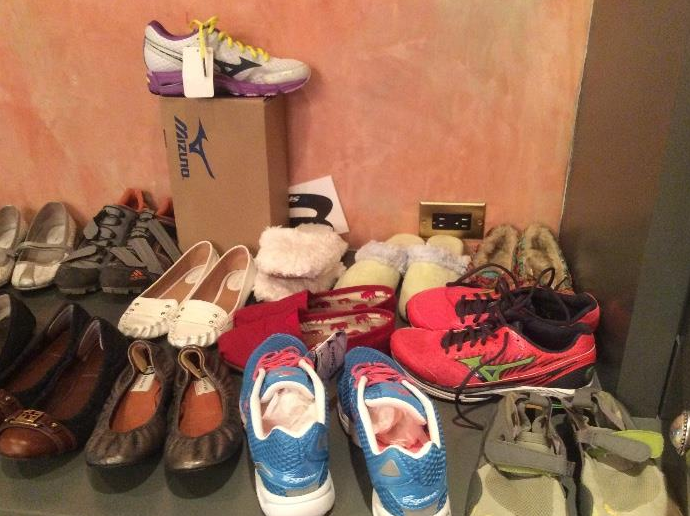 I knew I had to have them.

After talking to the other women at the sale on Friday morning, I was pretty sure I would get them, too.

I came out of my estate sale shell a bit, and expressed shock to the woman I was talking to that Davis, the Democratic Party’s gubernatorial candidate in Texas in 2014, had decided to put so many of her belongings on the market.

She didn’t have much to say on the topic. "Oh, is this woman famous?" she asked me. A lady who must have been eavesdropping asked, "Hold up, who is this woman?"

My confidence fell, however, when a reporter from the Fort Worth Star Telegram showed up with a camera crew and started asking people why they showed up for the sale.

A few of of the women interviewed said they were there for the shoes, too. You can see the concern on my face as one of the women states her intention to get them at about the 22-second mark in this video:

Determined not to fail, I slowly crept closer to the entrance to make sure that once the doors opened I would be rewarded for being first in line.

Some of the friends I had made let others who were trying to inch forward know that I was there first and made clear that they had my back. "This is Texas, so you better be careful cutting the line," one jokingly warned the group.

The garage door in front of us opened and I was raring to go. But there was some housekeeping that had to be handled first.

The house Davis is selling is in a private community in Fort Worth’s museum district, and the rest of the guests were not as courteous as me. I parked outside the development—which had a fountain and was lovely, by the way—and walked to the house. Those who didn’t were blocking the streets, inviting commotion caused by neighbors threatening to have cars towed.

But I was not distracted. I was on the heels of the lady running the sale as she opened the door and had her point me directly towards the shoes. I saw the price on them, $120, and decided that was a steal in exchange for shoes that had been labeled "a talisman of feminism" by Sally Kohn.

I grabbed the shoes so fast that the news crew there never saw them. It pointed out in its coverage that only a "similar" pair of Mizuno Wave Riders was offered. But they were the wrong color.

I felt pretty good about my purchase, even though the order form that accompanied the shoes revealed that I just paid money for a pair of shoes that Mizuno had provided to Davis for free in February 2014 through a company spokesman known as the "Mizuno Shoe Guy." The company says it has "provided promotional products to numerous public figures" and that "any donation of product should not be seen as an organizational endorsement of anyone’s political views."

Even though I snagged what I came for, I walked through the house to see the rest of the stuff Davis had put up for sale. The house was understandably a mess given that it was in the midst of a move, but you’d have thought they could clean the sink. There was a jar of pickles in there so gross that somebody took a marker to it to write, "EW!!!" 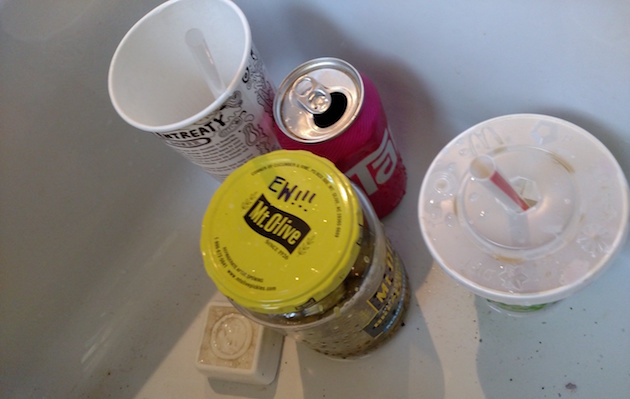 The kitchen was crowded with people examining the jewelry that covered most of the counter space. The remaining space was used to display ordinary glasses and utensils. Also propped up there was a tub of seemingly used toiletries such as lotions and hair styling products. 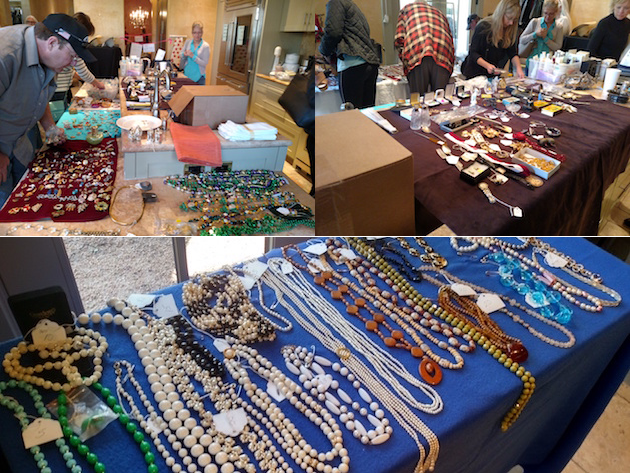 In another room, people scanned a large collection of coffee table books set up on a bookshelf. Also for sale were board games, an unopened Guitar Hero, a "hangover chill pill" eye pillow, and about 60 copies of Davis’ memoir, Forgetting to Be Afraid. (Yes, I counted.) 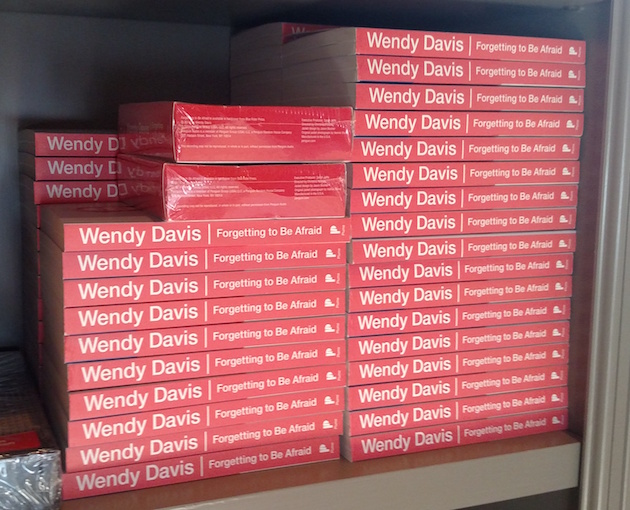 In the adjoining room there were four clothing racks stuffed with not only designer dresses and suits, but also biking shirts and a women’s New England Patriots jersey. On the floor between the racks of clothing was a plastic tub filled with risqué lingerie and bathing suits. 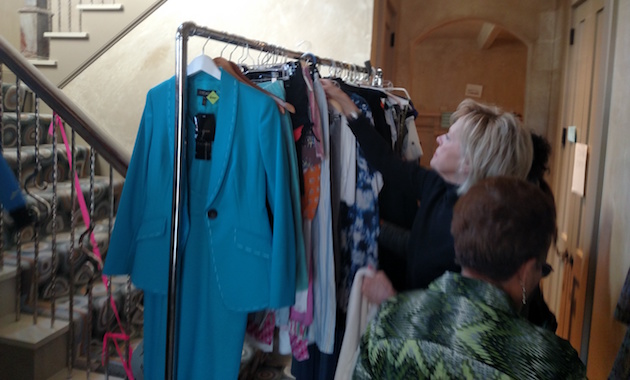 I found myself wondering why anybody in Davis’ situation would hold this sale.

The only political case I could think of remotely similar to Davis’ estate sale was when Hillary Clinton, who Davis was campaigning for this past weekend, deducted $2 from her taxes for donating used underwear to charity. So maybe the sale was Hillary’s idea?

More likely that it was her accountant’s.

After her big loss to Republican Greg Abbott in the race for Texas governor (she didn’t even win women), Davis dissolved her law partnership, saying she wanted to pursue her "policy passions" instead. Records show that the firm was her primary source of income while she was in the state senate, a job that pays $7,200 annually.

She has signed on as a public speaker with the Harry Walker Agency, but her page only has five groups listed that have booked her for a speech—three of which were Planned Parenthoods. She told a local paper in January that a "television series that’s loosely based on her life is still in the works," but there is no word on whether that will work out. She came out with a book during her campaign, but nobody bought it.

During her time in the senate she listed her permanent address as the Fort Worth house and also lived in Austin where the legislature met. However, a 2014 Washington Free Beacon investigation found that Davis had spent more than $130,000 in campaign cash to live in luxury apartments that offered a wide range of amenities during her months in the state capital.

Now that she holds no elected office, she will be forced to pay for her Austin residence out of her own pocket, which is likely why she is selling her Fort Worth house.

This sort of economic struggle is understandable as we have entered the eighth year of the Obama economy, so I decided that to help Wendy I would grab a few more items before I checked out.

I was drawn to the stack of Forgetting to Be Afraid, and when I got to it I noticed that it was also being offered as an unabridged audio book. I grabbed both, but neither had a price.

When I checked out, the pair was offered to me for $10—but my inherent New York values led me to negotiate the cashier down to $8.