2.5 million could get green card, path to citizenship under plan

House Democrats are expected on Tuesday to bring to a vote a bill to grant protection from deportation and a path to permanent residency for millions of illegal immigrants.

H.R. 6, the American Dream and Promise Act, will likely pass the Democratic-controlled House, although it is dead on arrival in the Republican-controlled Senate. The bill passed through the House Judiciary Committee last month, following what Politico called an "intraparty squabble" over whether or not it should provide a path to citizenship to certain individuals with criminal records, and whether or not it should extend federal financial aid to illegal immigrants.

According to an analysis jointly authored by the Center for American Progress and the University of Southern California Dornsife Center for the Study of Immigrant Integration, the ADPA would extend permanent legal status and eventually a path to citizenship to up to 2.5 million currently resident illegal immigrants. These would be drawn from beneficiaries of the Deferred Action for Childhood Arrivals (DACA), Temporary Protected Status (TPS), and Deferred Enforced Departure (DED) programs.

The largest group, totaling an estimated 2.1 million, are those individuals who were under the age of 18 upon arrival to the United States, many of whom were previously beneficiaries of DACA under President Barack Obama. Any individual currently enrolled in high school or with a diploma or equivalent will be eligible for conditional permanent resident status, which can be turned into permanent residency and eventually citizenship subsequently. Individuals not yet old enough to be enrolled in high school will also be protected from deportation, pending their enrollment.

The remaining 400,000 beneficiaries would be drawn from the TPS and DED programs, both of which are designed to provide temporary relief from deportation for otherwise illegally resident people from deportation if their home country is experiencing crisis conditions. President Donald Trump has sought to reduce the number of TPS beneficiaries, but H.R. 6 would extend grant essentially all of them green card status. In so doing, the bill would make what was once intended as a temporary stay of deportation into a permanent residency status.

The resultant mass amnesty would concentrate in primarily left-leaning states, with 628,000 alone coming from California. 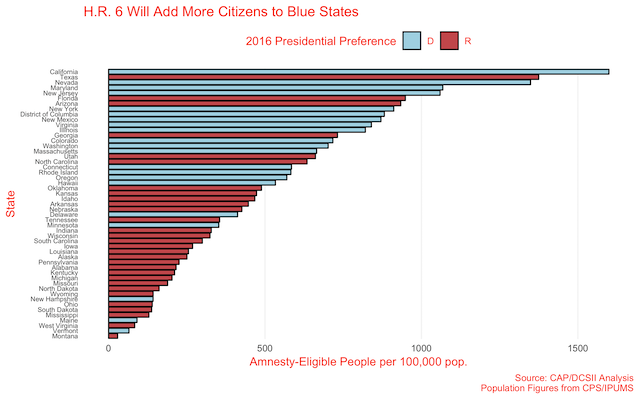 Importantly, H.R. 6 would make no trade-off in terms of reforms to the immigration system designed to reduce future illegal immigration. Wholly absent from the bill are added funds for border security or support for the ongoing border crisis, even as apprehensions at the Southwestern border are on track to exceed one million in FY 2019. It also disregards any reforms to the legal immigration system, such as the merit-based package floated by the White House in recent weeks.

"It is outrageous that House Democrats are holding a vote on H.R. 6, while they refuse to address the humanitarian crisis on our southern border," Rosemary Jenks, Director of Government Relations for the pro-immigration-restriction group NumbersUSA, told the Free Beacon. "H.R. 6 would be the largest amnesty in our history, if enacted. It would bring immigration enforcement to a complete halt, and it would reward smugglers, law breakers, and gang members with green cards and a path to citizenship. It also sends exactly the wrong message to those considering coming to the United States illegally. House Democrats should be ashamed."