For Second Month, More Than 100,000 Apprehended Illegally Crossing the Border

This figure makes for another increase over March's record-busting 103,000 apprehensions, and thereby another month of what even Obama-administration officials now acknowledge is a crisis at the Mexican border. CBP noted on Twitter that as of this past Sunday, seven months into the fiscal year, 2019 apprehensions have exceeded the annual total for all years since 2009. 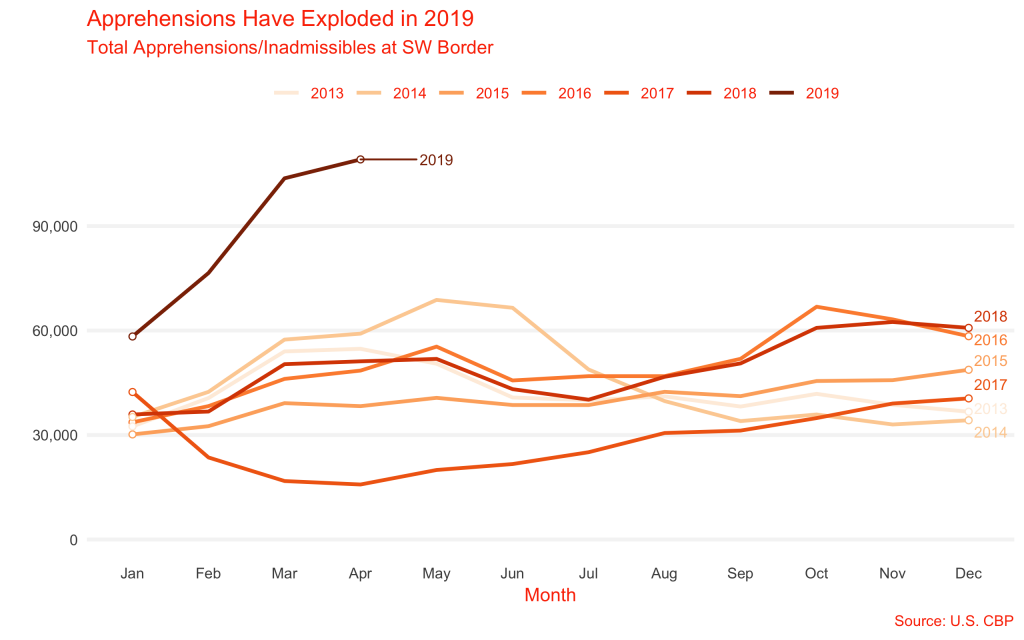 "We continue to face a humanitarian and security crisis at our southern border," Acting Executive Associate Director of U.S. Immigration and Customs Enforcement Nathalie Asher told a Congressional hearing Wednesday.

"This dramatic increase of arrests by U.S. Customs and Border Protection (CBP) has placed a strain on our entire immigration system, stretched resources thin across the U.S. Department of Homeland Security (DHS), and has ICE balancing its public safety mission in the interior of the United States with the influx of aliens at the border," she said.

Apprehension rates have grown continually since January, fueled primarily by rising migration from three central American countries: El Salvador, Guatemala, and Honduras. Whereas once illegal immigrants were primarily single men from Mexico, the thousands apprehended over the past several months have been primarily unaccompanied children and members of families ("family units").

The U.S. Border Patrol reported that it had apprehended more families and unaccompanied minors attempting to enter illegally than at any point since it began keeping track in 2012. 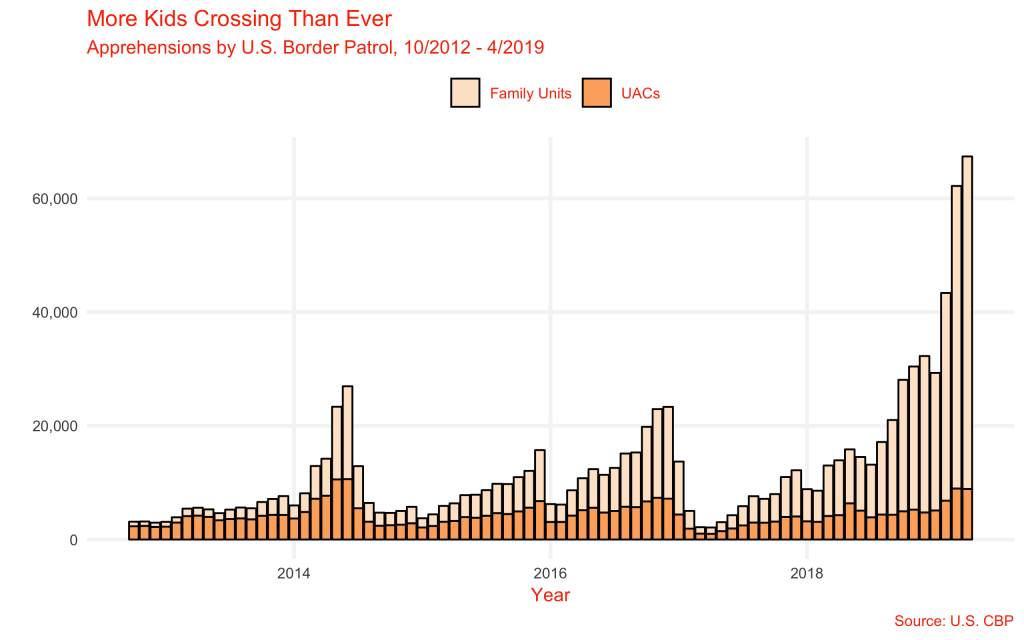 Caring for and housing these families and children, many of whom arrive sick or in need of other attention, has taxed border authorities' resources to the breaking point, the Department of Homeland Security Advisory Council said in a recent report. By the council's estimate, some 40 percent of CBP officials are committed on any given day to dealing with the influx, leaving them unable to cope with drug smuggling and potential national security threats.

"The unabated 600 percent surge of family units from Central America to our borders and properly caring for this population have overwhelmed the entire government and brought our border security and immigration management systems to the point of collapse," the report claims.

The DHS Advisory Council called for more funding for CBP, as well as the closure of legal loopholes that enable mass abuse of the asylum system. In the former call, they were joined earlier this week by the Editorial Board of the New York Times, which called on Congress to "give Trump his border money," and grant a $4.5 billion funding request from the White House to help shore up CBP resources.

"But as record numbers of Central American families flee violence and poverty in their homelands, they are overwhelming United States border systems, fueling a humanitarian crisis of overcrowding, disease and chaos," the board wrote. "As resources are strained and the system buckles, the misery grows."

The White House is expected to work with Sen. Lindsey Graham (R., S.C.) on a proposal to fix issues with the U.S. asylum system. This proposal will come separately from the new immigration reform first floated earlier this week by presidential son-in-law Jared Kushner.

Men Behind ‘Potential Massacre’ in Virginia Were Illegal Immigrants