George Stephanopoulos thanked Hillary Clinton's campaign manager Robby Mook in the acknowledgement section of his 1999 tell-all memoir All Too Human.

Stephanopoulos' book, described as "a new-generation political memoir" of a man "who got his hands on the levers of awesome power at an early age," was written after he left the Clinton administration and returned to his alma mater Columbia to be a visiting professor.

Mook was an undergrad student at Columbia during Stephanopoulos' brief tenure and was already politically active. He was a member of the College Democrats and was active in Democratic politics in his home state of Vermont.

Mook was also part of the team of interns who worked under Stephanopolous' research assistant at Columbia, responsible for "reviewing thousands of pages of public records and making sure I got my facts straight," wrote Stephanopolous.

Here is the excerpt from All Too Human where Mook is thanked: 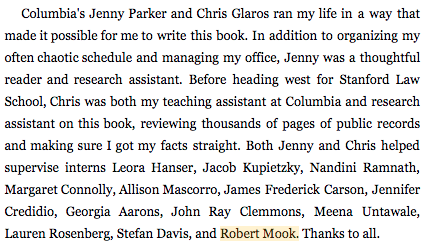 The Washington Free Beacon discovered that Stephanopolous had donated thousands to the Clinton Foundation and failed to disclose that fact during ABC News' coverage of controversy surrounding the foundation.

Questions have been raised as to whether Stephanopolous' ties to the Clintons make him unable to impartially report on the 2016 election.

Stephanopoulos has since apologized for his failure to disclose the donations. He has also said that making the donations was a mistake and that he will not be moderating ABC's Republican debate.

Top members of the Clinton campaign hosted Stephanopoulos and other members of the media for an off-the-record dinner in New York City just days before the campaign was formally launched.

The Clinton campaign did not return a request for comment on Mook's relationship with Stephanopoulos.