Fallon was a featured guest at the four-day conference held by the Democracy Alliance, a wealthy liberal donor network that funnels millions of dollars into approved political groups.

Fallon was featured on a panel, "Preserving the Role of Our Courts," which presented the new organization to the donor network, according to a portion of the conference agenda obtained by the Washington Free Beacon. 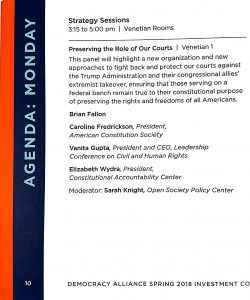 and their congressional allies' extremist takeover," the agenda says, "ensuring that those serving on a federal bench remain true to their constitutional purpose of preserving the rights and freedoms of all Americans."

Fallon's role at the new firm was disclosed in his biography for the conference, where it was announced he would be the executive director of the new group.

"Beginning in spring 2018, Fallon will serve as executive director of a new, nonprofit organization to oppose President Trump's makeover of the federal judiciary," his biography says.

Fallon did not respond to requests for more information about the new group.

Prior to his role as national press secretary for Clinton's failed 2016 presidential campaign, Fallon served in other top communications roles including director of public affairs for the Justice Department.

Since the election he founded his own public affairs firm and joined Priorities USA, a Democracy Alliance-backed super PAC, as a senior adviser.

Fallon's Monday panel introducing the new group was moderated by Sarah Knight of Open Society, a foundation founded by billionaire George Soros, a founding member of Democracy Alliance. He claims to have spent $32 billion of his personal fortune on Open Society and its related projects.

Also scheduled to appear on the panel were Caroline Fredrickson of the American Constitution Society, Vanita Gupta of the Leadership Conference on Civil and Human Rights, and Elizabeth Wydra of the Constitutional Accountability Center.