Eric Swalwell Is a Financial Mess

Despite $174k annual salary, Swalwell has failed to pay down student loans, built up credit card debt as congressman

Swalwell graduated from law school in 2006 and was first elected to Congress in 2012. He spent the years in between as an Alameda County prosecutor and town council member in Dublin, Calif.—which earned him $118,548 in his last full year of work. The 38-year-old congressman began earning even more, $174,000-a-year, when he entered Congress in 2013, but his annual disclosure forms show his financial situation has worsened.

Swalwell has failed to significantly pay down his biggest debt—the $50,001 to $100,000 worth of student loan debt he owed when he first ran for Congress in 2011 still remains at the same level. He has also lost his largest asset—the $15,001 to $50,000 he had invested an Alameda County pension fund when he first ran was cashed out in 2013.

Swalwell in 2016 reported an investment of between $15,001 and $50,000 in a Vanguard retirement account, but he at the same time began to report significant credit card debt.

Swalwell owns no property, according to the disclosures. Public records indicate he is currently renting a recently renovated four-bedroom townhome in northeast Washington, D.C.

Oddly missing from all of Swalwell's disclosures is a single checking or savings bank account.

House of Representatives rules mandate members to disclose all bank accounts held by members and their spouses, as long as the cumulative amount held in those interest-bearing accounts exceeds $5,000.

Congressional newcomer Alexandria Ocasio-Cortez (D., N.Y.) discloses a bank account worth between $15,001 and $50,000. In the year before she ran for Congress, she reported earning $43,719 from bar tending jobs. 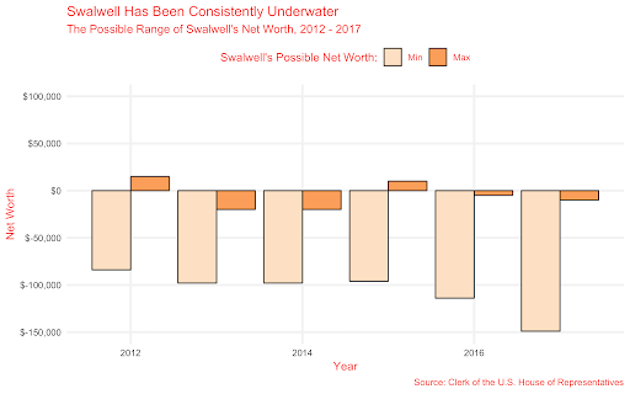 It is unclear whether Swalwell has kept accounts off his disclosures because he has less than $5,000 cumulatively, or because he keeps all his money in non-interest-bearing accounts, which are generally used only by financial novices and are becoming a thing of the past.

He has also been prone to making errors on his disclosures. He failed to report his student loan debt on his original disclosures and falsely stated on his 2013 disclosure that he still owned the Alameda County pension he'd already cashed out.

Experts across the board would recommend paying off student loan debt as quickly as possible, if you can afford to do so—the longer you owe, the more you end up paying. Experts would also try and dissuade anyone from cashing out a pension fund early because the move often comes with a financial penalty, as it does for the Alameda County pension Swalwell held. Getting buried in credit card debt is also something to avoid.

Swalwell said in 2015 he pays $600 each month paying down his student loan debt, which would come out to $7,200 a year, or just over 4 percent of his annual salary.

Swalwell did say, however, that he plans to release his tax returns in the coming weeks.

"Americans should have no doubt about where their leaders' loyalties lie," Swalwell told the Washington Free Beacon. "All candidates running for president should release their tax returns. I will release mine soon, as well."

His office did not give any additional details on when exactly the taxes would be released. His next financial disclosure to the House will likely come in the next few weeks.

Swalwell has said he will not run for another term in Congress, instead focusing on his presidential campaign.