Interior Secretary Deb Haaland, the first Native American cabinet secretary in history, married her longtime partner Skip Sayre on Saturday at a tribal resort in New Mexico. Sen. Elizabeth Warren (D., Mass.), the failed presidential candidate best known for pretending to be Native American, was among the celebrities in attendance.

"The re-implemented mask requirement applies to all individuals aged 2 and older in all indoor public settings—except when eating or drinking," the governor's press release for the order states. "The indoor mask requirement will be effective Friday, Aug. 20. It will remain in effect until at least September 15."

An Interior Department spokesman, who is a former employee of Media Matters for America, told the Free Beacon guests at the wedding "were required to be vaccinated and wear masks" in accordance with "CDC guidance and New Mexico's public health orders," but did not comment on the photographic evidence that contradicted this claim.

Lujan Grisham's office did not respond to a request for comment about the apparent violation of the state's mask mandate. 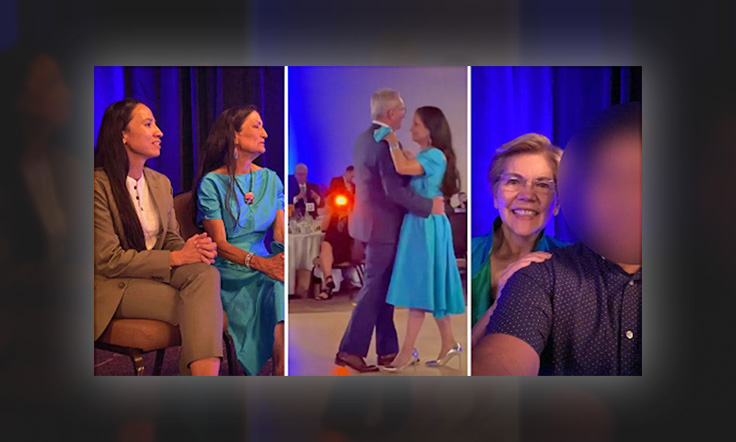 Politico‘s Playbook newsletter also reported, without evidence, that "guests were required to be vaccinated and wear masks." The news blog published two photos of the married couple posing outdoors, but none from the ceremony or reception, which appears to have taken place indoors.

In one photo, Haaland and Sayre are embracing on the dance floor. Neither are wearing masks, though Haaland appears to be holding one in her hand. Another photo shows Haaland sitting next to Rep. Sharice Davids (D., Kan.), an actual Native American who has bragged that "all my heroes killed colonizers." The women were unmasked, even though they were not eating or drinking. Another photo shows Warren smiling without a mask as she poses with a fan.

"Bruce and I were so happy to celebrate Deb and Skip this weekend," Warren wrote on Facebook. Her office did not return a request for comment on the countless lives endangered by the senator's reckless behavior.

Haaland's wedding is the most recent example of Democratic politicians flouting government-imposed COVID-19 restrictions while insisting that everyone else follow the rules. Rep. Sean Patrick Maloney (D., N.Y.), chairman of the Democratic Congressional Campaign Committee, lectured Americans about the importance of wearing masks, yet defied a State Department "do not travel" warning by attending a maskless wedding in France earlier this month.

Former president Barack Obama threw himself a massive birthday party at his $17.5 million estate on Martha's Vineyard, which coincided with a spike in COVID-19 that is threatening to overrun the island's only hospital. Muriel Bowser, mayor of Washington, D.C., attended a maskless indoor wedding earlier this summer, less than 24 hours after she mandated the use of masks indoors. Gov. Gavin Newsom (D., Calif.) has violated his own health and safety guidelines on numerous occasions.

More than 227,000 Americans have died from COVID-19 since President Joe Biden took office.