CNN host Chris Cuomo deleted a tweet Wednesday asking followers if the network should reveal the name of a Reddit user who created a gif tweeted by President Donald Trump.

CNN reporters managed to track down the creator of Trump's most-retweeted gif showing the president body-slamming a WWE star whose face was superimposed with the CNN logo. In its final story, CNN withheld the man's name, arguing that he was a private citizen who had apologized. CNN was castigated for reserving the right to disclose his name later, which critics called extortion.

"Should CNN reveal name of Reddit user who made [Trump] wrestling video?" Cuomo asked. "Had a lot of bigoted and hateful material on page and website." 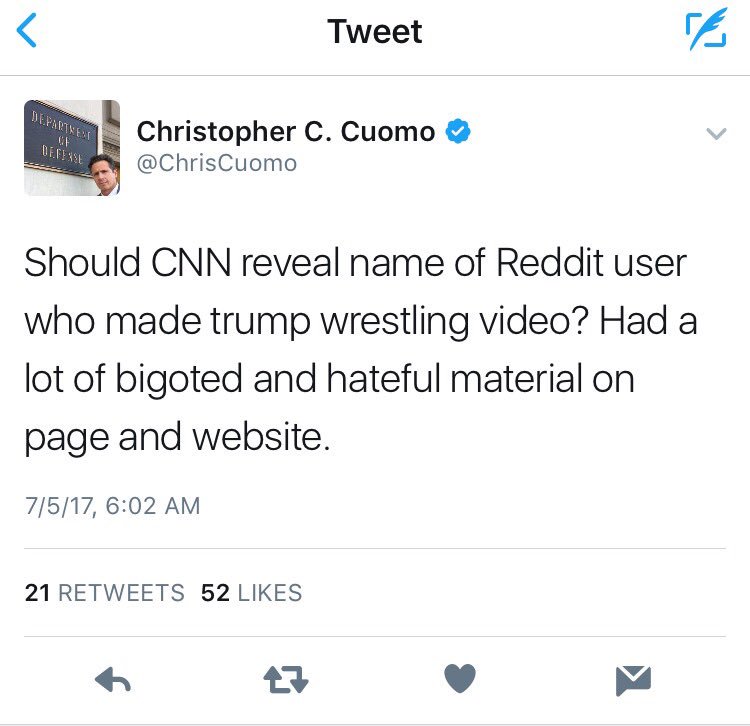 Cuomo later deleted the tweet, saying it was a complicated issue that required more than one tweet to discuss.

we know the age. deleted tweet because this not a simple tweet discussion: how handle an apology? when expose someone? is clip the issue? https://t.co/KgO6NbIVAM

not at all – just more than a tweet. lots of issues. u see what was on page and on website? really ugly stuff. not a "one mistake" situation https://t.co/fcks709lGI

potus free to attack but needs to own it. where wrestling clip come from? they say not from reddit guy…then where? trumpets ignore that. https://t.co/I1tdtAvdTx

This is not the first time Cuomo has taken a vocal stance on "bigoted and hateful" speech. Cuomo famously once claimed that hate speech was not protected by the U.S. Constitution and could be banned. The CNN host later deleted those tweets and admitted he was wrong.