The high school yearbooks of former Texas congressman Robert Francis O'Rourke make no mention of him as "Beto," the nickname he says "just stuck" with him ever since he was growing up.

The yearbooks from his time at the Woodberry Forest School, an all-boys Virginia boarding school O'Rourke attended after leaving his local high school in El Paso, Texas, refer to O'Rourke as either "Rob" or "Robert," the names he also went by while in college and while trying to find himself in New York City after graduating.

The school yearbook from 1991, O'Rourke's senior year, reveal a student who was already interested in punk rock, was involved with numerous literary clubs, and ran track. The yearbook also shows that some of his classmates at the small school posed for annual pictures with the Confederate flag, though O'Rourke does not appear in any of those images.

O'Rourke graduated in June 1991 and was awarded the Robert F. Williams Memorial Medal for being the student who "submits the most imaginative prose or poetry," according to the yearbook.

O'Rourke used his space in the yearbook to print the lyrics from "Hidden Wheel," a song about being the "angry son" by Rites of Spring. He considers himself a big fan of the emo punk band.

The lyrics printed along with his name are as follows (formatting choices his):

O'Rourke's writing as a student was done for The Talon, a "publication of student standouts in art, poetry, prose, and photography." O'Rourke was also a member during both his junior and senior year of the Algonquin Society, which met to "discuss magazine articles in such magazines as the New Yorker, Harper's, and The New Republic."

It is in the space reserved for pictures of different groups that the Confederate flags can be found. Both the North Carolina Club and the Georgia Club (the school boasts a student body from states across the country) chose to feature the "Stars and Bars" in their yearbook submissions. 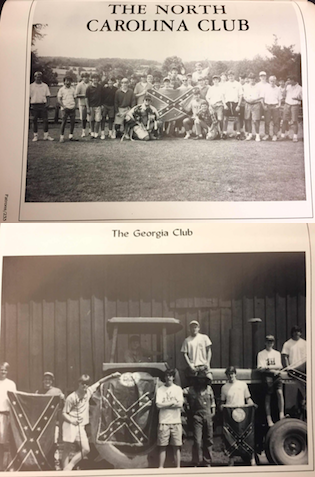 Pictures of the clubs in the previous year, when O'Rourke was also enrolled, similarly feature the flag.

There was also a Texas Club at the school, but O'Rourke does not appear to have been a member. The Texas Club did not showcase any Confederate flags in its yearbook entry.

In a light-hearted section of the yearbook predicting where members of the senior class would be "twenty years from now," the prediction for O'Rourke is that he'd be a "straight edge leader," a reference to a subsection of the punk rock genre that wanted to move away from heavy alcohol and drug use.

Instead, 20 years after graduating from Woodberry Forest, O'Rourke wound up being a member of the El Paso city council, plotting a run for Congress as a Democrat. He ran to represent Texas in the U.S. Senate in 2018, but lost to Republican Sen. Ted Cruz.

O'Rourke is now considering a run for president, but is struggling to find direction in his life as he plots what to do, the New York Times reports.