When Texas Senator Ted Cruz's 2018 Democratic opponent ran for city council in El Paso, Texas and then for Congress in a heavily-Hispanic district, he was Beto.

When he was captain of the crew team at a prestigious Ivy League university a decade earlier, he was Rob.

The Irish-American O'Rourke has long explained that "Beto," the Hispanic nickname for his given name Robert, was a nickname given to him in infancy that "stuck."

"My parents have called me Beto from day one," he told CNN after Cruz released an ad attacking his adopted name, "and it’s just — it’s kind of a nickname for Robert in El Paso. It just stuck."

O'Rourke even posted an image to Twitter of him as a child wearing a "Beto" sweater.

But it apparently didn't stick when O'Rourke, the son of an influential El Paso judge, was part of the crew team at Columbia University. At least three articles in two separate publications show that while attending the school, O'Rourke went by "Rob" or "Robert." 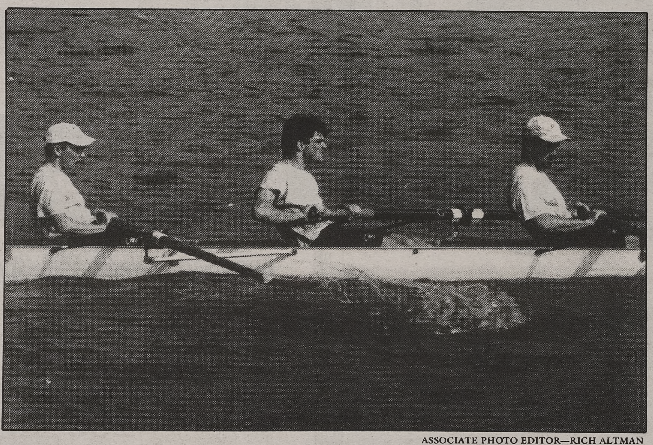 The Free Beacon cannot confirm which of these white men is Rob O'Rourke. / Columbia Daily Spectator

A Columbia Daily Spectator article four days later likewise quoted "co-captain Rob O'Rourke" explaining their opening loss to Rutgers. "It was a decent race for about 1300 meters," he said. "At 1000 meters, each team made their move. Rutgers held theirs and capitalized on it, and we fell back."

The next week, "Robert O'Rourke" was extensively quoted explaining a win over the Massachusetts Institute of Technology: "Past the 1000-meter mark the water was really rough, but we just rowed really hard and everyone was determined…"

A January 2018 Texas Monthly profile leaves no doubt that the two men are the same, noting that in his school years, Beto "was clean-cut, wore button-downs and slacks, and captained the Columbia rowing crew."

A search of both university publications show no instances of O'Rourke going by "Beto." But O'Rourke was credited as "Beto" in his punk rock band Foss's April 1993 album "The El Paso Pussycats."