Sen. Bernie Sanders (I., Vt.) wants to forgive all Americans' student debt, a move that would disproportionately benefit the highly educated and wealthy, data show.

"In 2008, we bailed out Wall Street. Now it's time to tax Wall Street's greed to help the American people," Sanders wrote on Facebook.

Sanders became the second candidate for the Democratic nomination in 2020 to lay out a comprehensive student debt relief proposal. He was scooped by Sen. Elizabeth Warren (D., Mass.), who offered her own plan in February. Warren’s plan has an income cap on eligibility. Those making less than $100,000 per year would be entitled to full forgiveness, with relief phased out between $100,000 and $250,000. Those earning more than $250,000 per year would be unable to void their debt.

Sanders's plan, however, will end up bailing out the bankers that he blames for inequality in the United States. It would grant full forgiveness to anyone with student loan debt regardless of net worth or income. Sanders's campaign noted that "[s]eventy-three percent of the benefits of cancelling all student debt will go to the bottom 80 percent of Americans, who are making less than $127,000 a year." But this line has commentators on both the left and right scratching their heads.

"If Republicans stood up and said they were going to pass a $1.6 trillion tax cut exclusively for people who had already attended college or grad school, and that the biggest benefits were going to people who trained to be surgeons, democratic socialist types would probably think it was insane," Slate’s Jordan Weissmann wrote Monday. "And yet, that’s pretty much what universal student debt relief is—at least if you look at it in isolation."

This is all because of a simple fact: by most measures, student debt holders are better-educated and make more money than their non-debt-holding peers.* 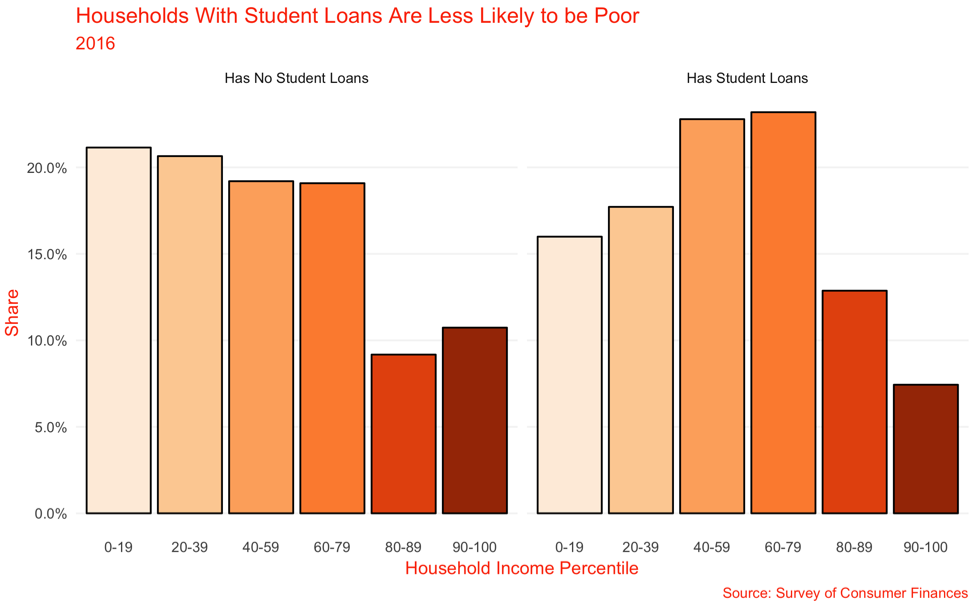 Those with student loan debt vary from those without in an important way: they have been to, and many have graduated from, college. Many student debt holders, in fact, have even earned an advanced degree.

Of the $962 billion dollars of student debt in 2016, those with a B.A. or greater held roughly 60 percent of it; a further 14 percent was held by those with an Associate’s Degree. 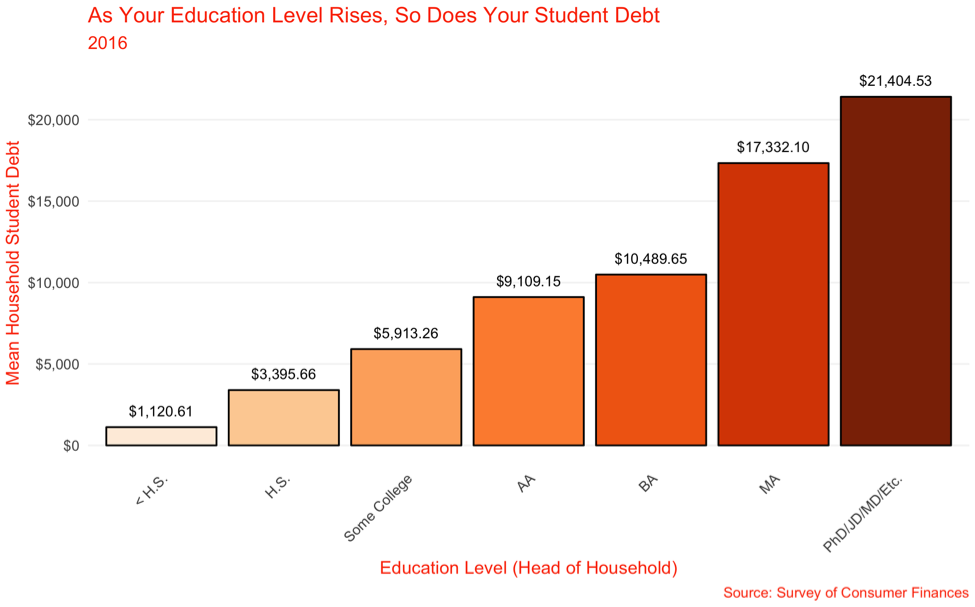 With those degrees comes an earnings premium. According to the Hamilton Project, as of 2016, those with a BA earned 1.68 times as much as a high-school degree holder, while those with an advanced degree could expect to earn 2.13 times as much.

This translates quite obviously into an inequality in who owns student debt. Sanders's campaign is right that "73 percent of all benefits will go to the bottom 80 percent." But the obverse, that $250 billion will go in to the pocket of the richest fifth of Americans, is also true. 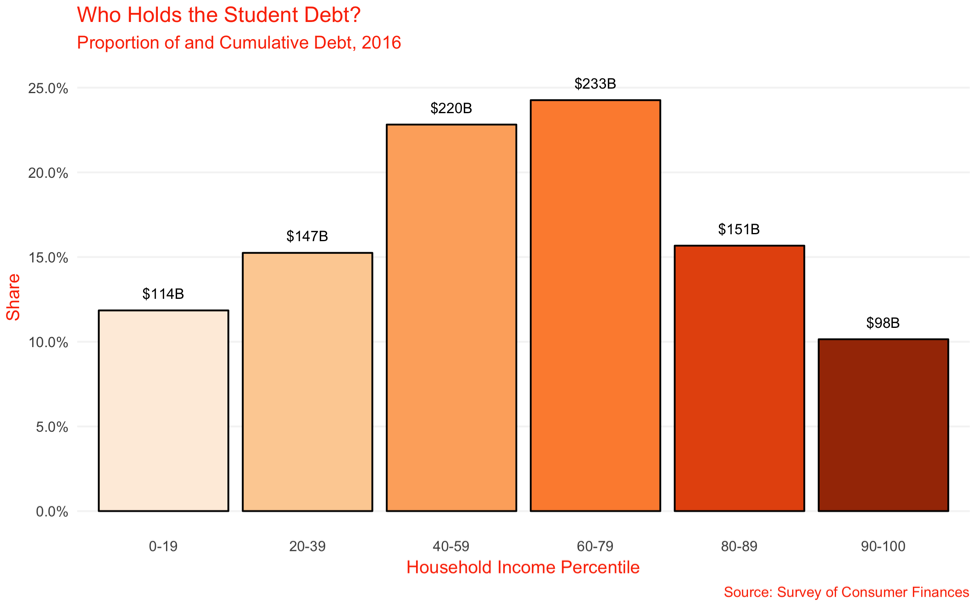 The biggest gains go to the third and fourth quintiles, who will rake in close to half a trillion dollars. In 2016 their median incomes, according to the Survey of Consumer Finances, were $52,657 per year and $86,074 per year, respectively.

The inequity of a debt jubilee is most apparent with high-status jobs. According to data collected by the personal finance site NerdWallet, 2017's medical-school graduates had on average $190,000 in debt, while dentistry students had $287,000. By comparison, the median annual pay for a physician is roughly $203,000, and for a dentist, $156,000.

Then, of course there are members of Congress. Sanders co-sponsor Rep. Ilhan Omar tweeted Sunday that she was one of the 45 million people "held back from pursuing their dreams because of the student debt crisis." As one tweeter pithily noted, "It's too bad Congresswoman Omar is held back from pursing her dreams by her student debt."

Some proponents of Sanders's plan have responded to this reality by arguing that while the rich do better in absolute terms under a student debt jubilee, the poor do better as a percentage of income. But this argument does not invalidate the reality that under the Sanders plan, the U.S. taxpayer would be asked to transfer $1.6 trillion mostly to the third of society with college degrees. Further, as New York magazine's Eric Levitz noted, this hardly explains why Warren's plan, with its income cap, is not preferable. National Review's Robert VerBruggen points out that leftists rejected the same reasoning when it was used to determine the beneficiaries of the 2017 tax cut.

To be sure, people do struggle under the burden of student debt. Those who fail to get a degree face poor outcomes, but even those who graduate find their life course delayed by the weight of debt. This is part of why even conservative policymakers are exploring other models for funding a university education, in order to reduce the burden associated with entering the modern economy.

Still, insofar as a BA or higher degree remains a major boon to lifetime earnings, it makes sense to think about student debt as an investment which reaps substantial returns. A student debt amnesty, therefore, is effectively a money transfer from the everyday taxpayer to those who are already set to finish ahead in the long run. That is usually the opposite of what government transfers are meant to do.

* Data note: this and all subsequent data is from 2016 Survey of Consumer Finances, the most recent instance of a triennial survey of Americans' income, assets, debts, and financial decision-making. Data were acquired from the SCF SDA, as linked to by the Federal Reserve Board’s website on the SCF.