Sen. Elizabeth Warren (D., Mass.) will pursue free college for all and cancellation of student loan debt if elected, she announced Monday.

Warren's plan, debuted in a Medium post, would cost taxpayers an estimated $1.25 trillion. Warren's proposes to pay using her "ultra-millionaire tax," which levies an annual tax of 2 percent on assets in excess of $50 million and three percent on those in excess of $3 billion.

Warren, who has fallen behind in polling, may be making a play for the Democrats' younger, college-educated base. However her plan, while perhaps appealing to the 20-something debtor, has numerous problems.

Although Warren mostly avoids acknowledging this in her Medium post, such mass loan forgiveness is possible because the federal government holds the overwhelming majority of all outstanding student debt—about 78 percent as of the end of 2018. This is thanks in large part to Obama-era changes that moved the federal government from guarantor to issuer of loans. (Warren does note that private student loan debt would also be eligible for cancellation, although she does not specify how.) 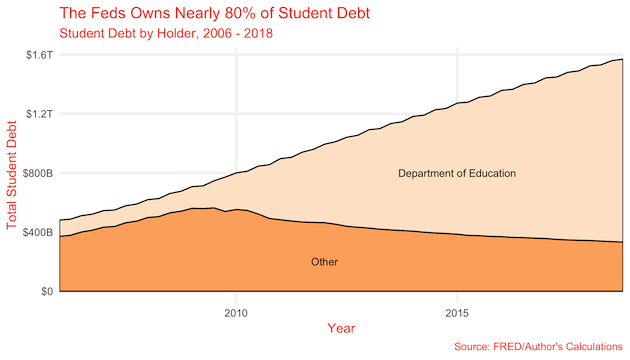 This mass forgiveness would cost about $640 billion, according to a group of experts from Brandeis University cited by Warren. It would in turn provide total debt relief for 76.2 percent of loan-bearing households, with at least some relief for 95 percent of same.

There are good reasons to be concerned about our collective student debt burden. Americans owe $1.5 trillion in student loans, the largest single source of debt after mortgages. This debt not only imposes a substantial fiscal cost, but its effects suppress family formation, home ownership, and fertility, playing a key role in the delayed adulthood of millions of millennial Americans.

At the same time, student-loan debtors are an odd group to target for government largesse. Because a college degree commands a substantial wage premium, the cost of a student loan is usually worth the investment over a person's life time (assuming they graduate, which many do not). Warren's experts estimate that among households with student debt, 72 percent of those with a BA and 47 percent of those with an MA would see their debt fully cancelled.

College grads would win; so too might universities. Dr. Lindsey Burke, who directs the Center for Education Policy at the Heritage Foundation, pointed out that if Warren's debt jubilee happens repeatedly (which she thinks is likely), it will become a major hand-out to universities, who can jack up their tuitions proportionally.

"There is one big clear winner, and that's the universities," Burke told the Washington Free Beacon.

The next step after the mass cancellation, Warren writes, is a "historic new federal investment" of another $610 billion to eliminate tuition and fees at all of America's 1,600 two- and four-year public colleges. Additionally, she will seek funding for $100 billion in new Pell Grants over ten years, to cover lower- and middle-income students can afford non-tuition expenses in public college. Warren also promises funds specifically for HBCUs, and a ban on for-profit colleges receiving federal funding.

"We need to fundamentally change the broken system that created the crisis in the first place," Warren writes.

But will free college for all actually solve the "broken system?" The answer is not so clear. Burke projects that we will "make the K-12 system a K-16 system," as an additional four years of free public education delays skills development at the high school level. This ties into a bigger problem: credential creep.

The current wave of student debt is a product of supply and demand. The supply comes largely from the free-spending federal government, following the insistence of president Obama that "every American will need to get more than a high school diploma." But the demand comes from the soaring value of a college degree—what's called the "college wage premium"—and the concurrent stagnation of earnings for those without a college degree.

This increasing premium partially reflects education increasing the value of a worker's output, what economists call the "human capital" returns to education. However, it also reflects employers' reliance on college degree as a "signal" of a person's natural employability.

The more common a "signal" is, the less informative it is to a potential employer. In 1870, when just 2 percent of 17-year-olds graduated high school, a high-school degree meant a lot; today, when 85 percent do, the degree has less filtering power. A similar logic increasingly applies to college degrees, which lose their signaling value as more and more people acquire them.

This leads to what economist and signaling-theory proponent Bryan Caplan calls an "arms race": people buy more and more education, reducing the signaling value of the education they already have, perpetuating the cycle. The result is "credential creep," whereby even low-skill jobs increasingly require college degrees. The negative effects of this creep fall disproportionately on poor Americans, especially blacks and Hispanics.

Free public college might socialize the exploding cost of credential creep, but it will also further devalue the signaling significance of a college degree, leading those with the financial means to acquire other credentials. If everyone can go to public college, the wage premium will accrue to those who can afford to a private school, or a post-baccalaureate credit.

"[Warren's plan] is going to perpetuate this notion that now the Masters degree is the new Bachelor's degree," Burke put it.

Caplan and Burke's preferred solution to this treadmill is to get the government out of the education-funding business altogether, which would stop its artificial reductions to the price of education. In theory, this would mean that only those for whom the true price of college was worth it would attend, slowing degree inflation and stopping millions of Americans from taking on debt to pursue a degree they will never earn.

For those less libertarian than Caplan, there is a broader conversation focused on rethinking how we pay for college. Conservative commentator Tucker Carlson advocated recently for compelling colleges to cosign students' loans, meaning that they would have a vested interest in a student completing his term of education.

Another, increasingly popular option is "income sharing agreements," which allow investors to buy a portion of a student's future income in exchange for funding his education. ISAs, already in use at major universities such as Purdue, would help link a student's payments to the benefits of his investment, shielding college drop-outs from the double-whammy of high debt and little wage benefit.

Such approaches, however, are outside of Warren's one-size-fits-all plan. Her proposal, instead, would transfer billions to those already at the top of society, while likely doing nothing to address the underlying dynamics that plunged 45 million Americans into debt. 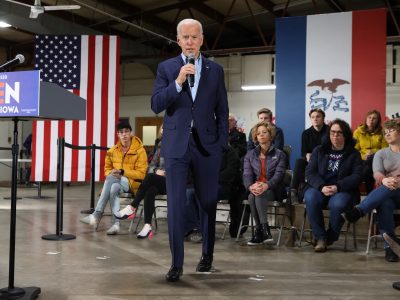