President Barack Obama's wedding ring was "noticeably missing" from his left hand on Sunday, according to a White House pool report.

Obama, who was at Camp David in Maryland on Sunday, arrived back at the White House and was photographed by the Associated Press without a ring on his hand. He was playing golf earlier in the day to celebrate his birthday, which comes this Tuesday.

Obama's ring, however, was off his finger long before he stepped on the course. He was photographed on Friday signing highway funding legislation and was not wearing his ring. 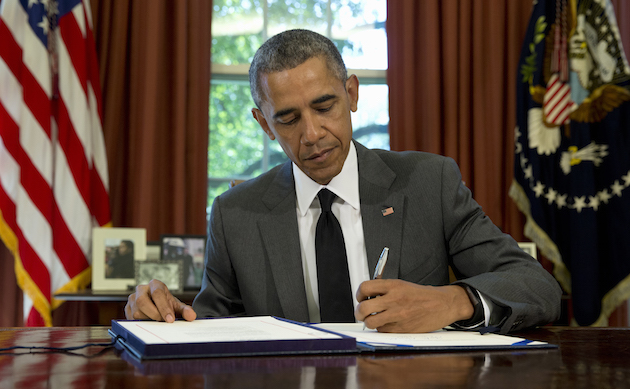 This is not the first time this year that Obama has decided to shed his ring. Last March, he spent nearly an entire week with no ring on his left hand.

Meanwhile, first lady Michelle Obama has spent much of her summer away from the White House. She took her daughters on a trip to Europe in June, and she spent last week in Palm Springs. She was in California to attend the Special Olympics, but made an excursion out to the Coachella Valley and appears to have stayed at the Rancho Mirage, where she and her husband have stayed together in the past.

When President Obama traveled to Palm Springs earlier in the summer, he was not joined by Michelle and the rest of the family.

Daughter Malia Obama has also been away from the White House, living in New York City as an intern for Lena Dunham's HBO show Girls.