The presidential campaigns of Sens. Bernie Sanders (I., Vt.) and Elizabeth Warren (D., Mass.) spent more than any of their opponents on Amazon products between April and July, FEC filings show.

This finding is surprising given that the pair are some of the most outspoken public critics of the tech giant. Their spending—nearly $200,000 combined in just three months—marks a stark contrast with the campaigns' rhetoric.

For both Sanders and Warren, attacking Amazon is no casual habit. Both publicly endorsed Amazon workers' strike during the company's annual "Prime Day" sale. Sanders additionally joined congressional colleagues in a letter asking the Department of Labor to investigate labor practices in Amazon warehouses. Both used the occasion to talk about the need to target big tech as monopolies: Warren reupped her pre-existing plan to do so, while Sanders publicly said that he would work to "break up" Amazon if elected.

But while Sanders and Warren have attacked Amazon, their campaigns have been happy to funnel money to Amazon and its related services. In fact, a Washington Free Beacon analysis of 21 Democratic candidates found that the two spent more with the company than every other candidate in the race. (Recent entrants Joe Sestak and Tom Steyer were not analyzed, nor was recent drop-out Rep. Eric Swalwell, nor minor candidates Wayne Messam and Sen. Mike Gravel.) 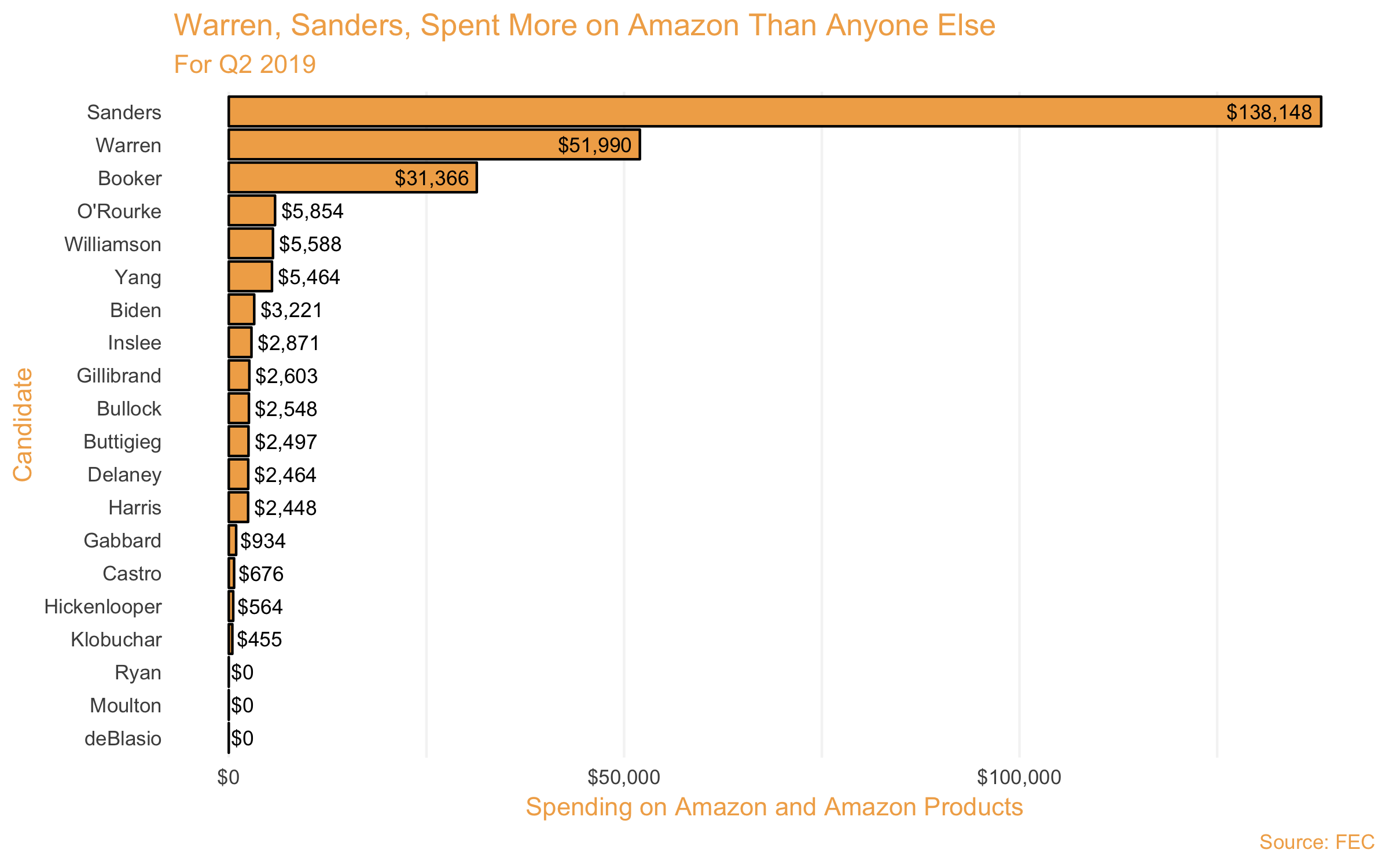 Every three months, campaigns report their expenditures from the previous quarter to the FEC. To find the above figures, the Free Beacon identified all expenditures with recipients including the word "amazon." Candidates have the discretion to label expenditures however they want — as such, this search captured payments to "Amazon," "Amazon Marketplace," "Amazon Web Services," "Amazon, inc.," and "Amazon.com." Each of these results is unambiguously a payment to web giant Amazon.

Sanders's campaign led the pack among Amazon payers—in fact, it spent more on Amazon than every other campaign combined. Categorized as "office supplies," 97 percent of those payments, ranging in value from less than $5 to more than $5,000, were to "amazon marketplace." The remaining 3 percent were a roughly $1,900 payment to Amazon Web Services and $1,700 paid to "amazon" for office supplies and event services.

For its part, the Warren campaign spent just shy of $52,000 exclusively on "amazon.com." All of those payments were designated as "office expenses," and like the Sanders payments are wide-ranging, from as little as $2 to over $7,000.

Based on these categorizations, it is likely that the campaigns' spending is innocuous, representing nothing more than the bulk purchase of office supplies online. The high spending likely reflects the increased resource demand from running large campaigns.

What is surprising is where both campaigns have opted to spend their money, in spite of their bosses' rhetoric. Neither the Sanders nor Warren campaign responded to a request for comment for this article.