A senior adviser to Sen. Ted Cruz (R., Texas) who played a critical role in crafting his national security agenda—including efforts to stop the Iran nuclear deal and designate the Muslim Brotherhood organization as a terrorist entity—has been tapped by the Trump National Security Council to serve as senior director for strategic assessments, a role that encompasses the fight against terrorist forces, the Washington Free Beacon can exclusively reveal.

Victoria Coates, a top Cruz aide and his longtime confidante, has departed the senator's office to serve as senior director for strategic assessments in the new White House NSC, a role that will see Coates managing long-term threats to the United States.

Coates worked for former Secretary of Defense Donald Rumsfeld and former Texas Gov. Rick Perry before joining the Cruz office in 2013. She also is an art historian who recently published a book on the history of democracy.

Coates' experience with Cruz, who was a leading critic of President Donald Trump during the 2016 primary, sets her apart from the rest of the newly installed NSC, which is comprised of retired Gen. Michael Flynn and many of his former military colleagues, according to those familiar with the appointment.

Multiple sources who spoke to the Free Beacon about the matter said the selection of Coates represents a strong effort by the Trump administration to counter Iran, reverse the contested nuclear deal, and place a central focus on countering the threat of Islamic terrorism.

Trump's latest executive order to halt immigration closely resembles a legislative effort by Cruz to pause immigration to the United States by any individual originating in a high-risk area, such as countries where al Qaeda, ISIS, and other terror groups hold significant territory.

Cruz told the Free Beacon that Coates would help Trump's national security team craft an aggressive response to the rise of Islamic terrorism and its threat against the American homeland.

"Dr. Coates brings together brilliance, judgment, and a deep understanding of the perils facing America in this increasingly dangerous world," Cruz said. "For the last four years she has played a central role in the Senate helping formulate our response to a feckless administration that was willfully blind to the threat of radical Islamic terrorism."

"Although we will miss her greatly in our office, I'm thrilled that Dr. Coates will now play a leading role at President Trump's NSC, helping plan for an uncertain future, strengthen our alliances, and defeat our enemies," Cruz said.

Rumsfeld, who served as secretary of defense under the Gerald R. Ford and George W. Bush administrations, told the Free Beacon the selection of Coates shows that the Trump administration is serious about combatting the global forces that threaten America.

"Dr. Victoria Coates was a valuable member of my staff," said Rumsfeld, who worked with Coates while writing his 2011 memoir. "Her wide ranging intellect, deep understanding of history, and appreciation for strategic thought brings a perspective that is invaluable in Washington, D.C."

Coates "understands well the significance of the long-range challenges to our country and our allies and how all instruments of national power can best work together," Rumsfeld said. "Reacting day-to-day to events around the world in a compartmentalized fashion, department by department, is not good enough in the 21st century."

One veteran Middle East foreign policy hand who worked closely with Coates when she was in Cruz's office told the Free Beacon that Coates brings a sophisticated political understanding to the White House.

"Victoria understands foreign policy as well as anybody in Washington, D.C., but she adds to that a grasp of politics and media that most policy officials don't bring to the table," said the source, who was not authorized to speak on record. "She'll be a critical asset to the Trump administration as it begins to shift American foreign policy, which will require getting buy-in from beyond the walls of the White House."

Coates declined to comment on record when asked by the Free Beacon. 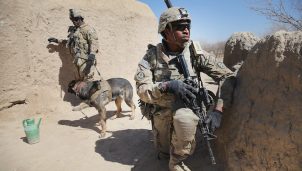