The United Nations disciplined and removed a top official from her post after she publicly admonished Palestinian terror groups for a spate of rocket attacks on Israeli citizens, a U.N. official confirmed to the Washington Free Beacon on Tuesday.

Sarah Muscroft, who served as the head of the United Nations' Office for the Coordination of Humanitarian Affairs (OCHA), was forced to apologize after an Aug. 8 tweet in which she condemned the Palestinian Islamic Jihad terror organization for its "indiscriminate rocket fire" into Israel. Following pushback from pro-Palestinian activists who accused her of being overly deferential to Israel, Muscroft called her original missive "ill informed" and then deleted her Twitter account altogether. A U.N. official confirmed that Muscroft was removed from her post as a result of the tweets and will be reassigned elsewhere in the agency.

Israeli officials and U.N. watchdog groups say the situation is proof of the international organization's systemic bias against Israel, revealing how the United Nations silences critics of Palestinian terrorism. While U.N. officials routinely criticize Israel and characterize it as an "apartheid state," they have done little to hold the Palestinians accountable for deadly terror attacks, including one earlier this week in Jerusalem that injured eight people, including Americans.

Muscroft originally took to Twitter last week to praise a ceasefire between Israel and the Palestinian Islamic Jihad following days of violent terror strikes that injured Israelis and Americans. "Such indiscriminate rocket fire of Islamic jihad provoking Israeli retaliation is condemned," Muscroft wrote, according to archived copies of her original tweets. 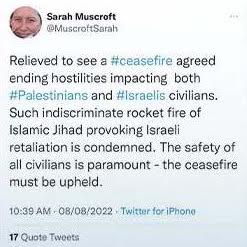 Her message prompted a flurry of angry responses from pro-Palestinian advocates and even U.N. officials who said that Muscroft wrongly blamed Palestinian Islamic Jihad for initiating the violent conflict. Following this pressure, Muscroft apologized and deleted her Twitter account. A U.N. spokesman confirmed to the Free Beacon that Muscroft will "be assigned a new role" as punishment. 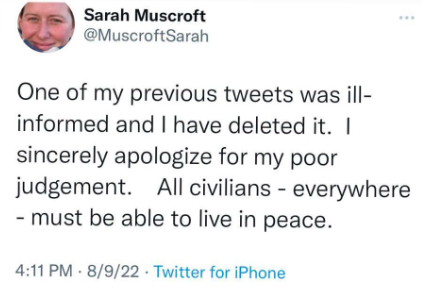 "The staff member in question will be assigned to a new role," OCHA spokesman in Geneva Jens Laerke told the Free Beacon. "OCHA has been present in the occupied Palestinian territory for the past 20 years, working to help meet humanitarian needs, guided by the humanitarian principles of neutrality, impartiality, and humanity. Over two million people in the occupied Palestinian territory need assistance—they remain our only focus and priority."

Gilad Erdan, Israel's permanent representative to the United Nations, in an Aug. 14 letter to Secretary-General António Guterres lodged a formal complaint over the matter, according to a copy of that letter obtained by the Free Beacon.

"Israel is disturbed to see that Palestinian outrage over tweets would so quickly devolve into ending the ability of a senior U.N. staffer to keep her job, and to express herself," Erdan wrote, noting that Israel has not always agreed with Muscroft's views about the conflict. "This represents a clear surrender of the U.N. to threats and intimidation, and poses a very problematic norm."

By punishing Muscroft, the United Nations is giving the Palestinians an "unwritten veto" over the international organization's statements, which "stands in clear contradiction with the basic principles of objectivity and neutrality that the U.N. claims to hold," Erdan wrote. "In the best case, this is a recipe for misguided self-censorship by U.N. officials. In the worst case, it is a prescription for U.N. officials to exclusively emphasize the Palestinian narrative, even if this falls in contradiction with facts on the ground."

A similar situation unfolded last year when U.N. official Matthew Schmale said in an interview that Israel undertook serious efforts to avoid civilian casualties during its May 2021 operation in the Gaza Strip that targeted Hamas. Palestinian activists attacked Schmale for his comments, and the United Nations recalled him from his post.

"Somehow," Erdan wrote in his letter, "it's always open season to criticize Israel, with no repercussions; but if a U.N. staffer dares to speak against Palestinian terrorism, there is immediate backlash in fear of reprisal."

The situation with Muscroft comes just weeks after a U.N. official who leads what critics say is a one-sided probe into alleged Israeli war crimes said that social media platforms are controlled by a "Jewish lobby"—comments that were widely condemned as anti-Semitic. That official, Miloon Kothari, did not face disciplinary repercussions for the comment and was defended by his superiors, who said pro-Israel forces were trying to discredit the investigation into Israel.

Arsen Ostrovsky, a human rights attorney and the CEO of the International Legal Forum, said the episode with Muscroft is "a shameful act of cowardice and hypocrisy from the U.N."

"Instead of supporting Muscroft, the U.N. effectively threw her under the bus, by capitulating to the terrorists and the anti-Israel activists, by forcing her to make an apology and then reassigning her to a new role," Ostrovsky told the Free Beacon. "The U.N., who are supposed to be impartial, never call out or reprimand their people when they criticize and attack Israel, yet they only do so when an official has the basic courage and decency to speak the truth and challenge the lies of Islamic Jihad and Hamas."