The Numbers Behind a Border ‘Crisis’

Analysis: What's going on at the border?

Addressing the nation Wednesday evening, President Donald Trump called for urgent action on what he called a "crisis" at the southwestern border.

"There is a growing humanitarian and security crisis at our southern border," Trump said, adding subsequently that it was a "a crisis of the heart and a crisis of the soul."

But whether or not the border is in crisis is a matter of disagreement. Numerous media outlets have claimed to "fact check" Trump's language, downplaying or attempting to qualify the state of affairs as he depicts it. Speaking in an official response to Trump's speech, Democratic leaders Rep. Nancy Pelosi (Calif.) and Sen. Chuck Schumer (N.Y.) accused the president of fabrication.

"This president just used the backdrop of the Oval Office to manufacture a crisis, stoke fear, and divert attention from the turmoil in his administration," Schumer said.

To what extent is there a crisis on the southwestern border? Data from U.S. Customs and Border Protection paint a complicated picture, showing that while some historic problems have receded, border agents are simultaneously dealing with unprecedented challenges on other fronts.

In absolute terms, CBP is much less burdened than it has been historically. Criticizing the idea that the state of affairs at the border constitutes a national emergency, Migration Policy Institute analyst Sarah Pierce pointed to overall rates of apprehension, which are at "historic lows." 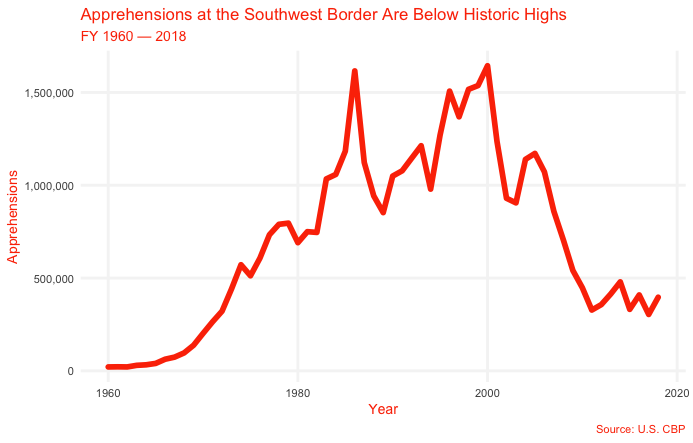 Indeed, the number of individuals apprehended annually by Border Patrol officers has declined substantially from peaks in the 1980s and 1990s, a drop in line with heightened enforcement efforts beginning under President Bill Clinton. At the same time, USBP employs almost five times as many agents today as it did 25 years ago, meaning that each USBP agent is responsible for fewer apprehensions.

But this absolute view does not tell the whole story. While the total number of apprehensions has dropped, the composition of the group of people apprehended has shifted dramatically. Specifically, the number of people coming as families ("family units" in CBP jargon), and unaccompanied children ("UACs") has spiked, accounting for a majority of apprehensions in recent months. 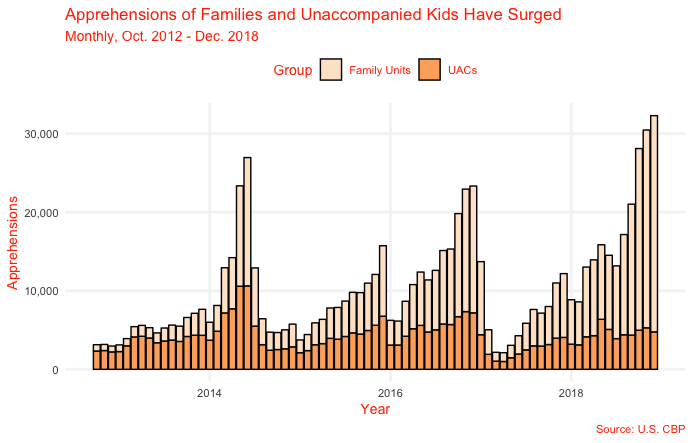 CBP has tracked UACS and Family Units as specific groups for less than a decade, so it is hard to put these figures in long-run historical context. Still, what this trend indicates is a substantial change in who is attempting to illegally immigrate.

This change is a product of both shifting demographics and shifting legal norms. Historically, most people attempting to illegally enter the United States have been lone adult Mexican men, seeking unauthorized work. But as America's southern neighbor has developed and simultaneously seen a greying of its population, Mexicans' demand for U.S. employment has declined. 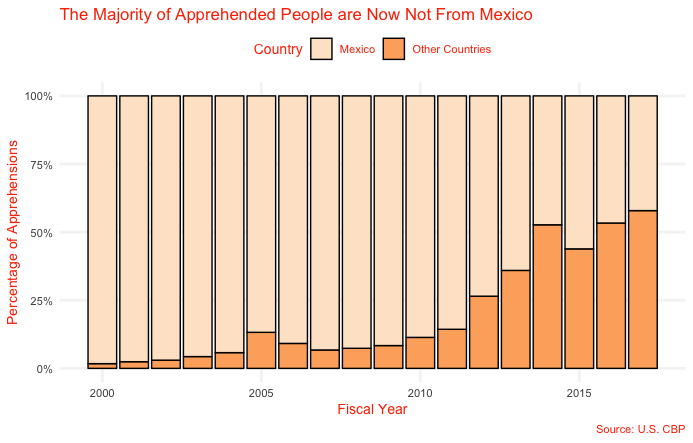 At the same time, destabilization and violence in the "northern triangle"—El Salvador, Guatemala, and Honduras—have driven families and children to make the long, often dangerous trek north to attempt to illegally enter the United States. Whether such migrants qualify as humanitarian refugees or economic migrants is a matter of debate, with the line between those categories often blurry.

The boom in unaccompanied minors and family units is further exacerbated by laws which provide preferential treatment to UACs from the northern triangle and children with or without their guardians. Under the 2008 William Wilberforce Trafficking Victims Protection Reauthorization Act, DHS is obliged to release unaccompanied minors from "non-contiguous" countries (i.e. not Mexico) into the interior. And under current interpretation of the 1997 Flores settlement agreement, DHS can only detain any child—accompanied or not—for 20 days before releasing him into the interior.

The consequence of these rules is that minors, especially from non-contiguous countries, can expect to be released into the interior upon apprehension. Under previous policy, adults traveling with children expected not to be separated, and therefore also to be released. The Trump administration has attempted to address the Flores loophole first through its controversial family separation policy and then, subsequently, by instituting a rule meant to overturn Flores—said rule is likely to face legal challenges.

As such, the current legal regime acts as a major incentive for children to make the long, dangerous trek north, thus explaining the current boom. But the surge in traveling families and UACs is not the only issue border agents currently face; they are also forced to cope with an overwhelming flow of drugs from Mexico.

America is in the middle of a deadly drug crisis, with 70,000 overdose deaths in 2017 alone. Many of those drugs are produced in Mexico or Latin America, and then flow across the southwestern border. Data from CBP show surging seizures of drugs over the past ten years, both at and between points of entry. 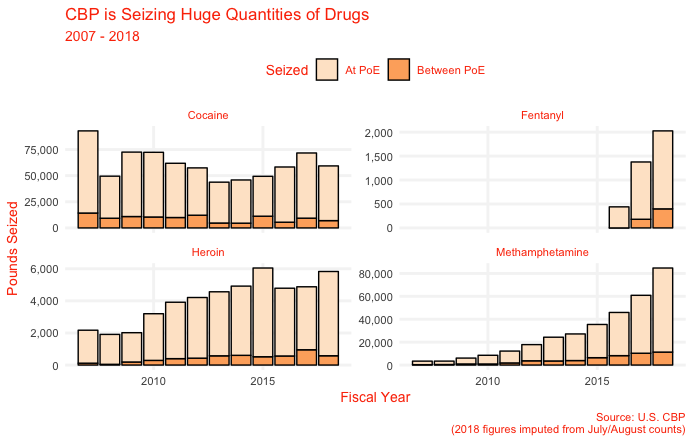 "Our southern border is a pipeline for vast quantities of illegal drugs, including meth, heroin, cocaine, and fentanyl," Trump said Tuesday.

The president is right about that. Most of the methamphetamine in the United States—which killed almost 11,000 people in 2017—is produced in cartel-run Mexican super-labs over the border. Most heroin is also Mexican, according to the Drug Enforcement Agency. Most cocaine is produced in Colombia, but almost 40 percent is smuggled through Mexico. And most fentanyl is produced in China, but Mexican drug traffickers play a role in the trade.

In other words, the southern border faces not only surging family and child immigration, but also an overwhelming drug problem—a dangerous combination.

What to do about these issues remains a subject of contention, the central fight behind the current government shutdown. The administration has called for a bill to end the shutdown while simultaneously providing $5 billion for a border barrier, and a further $6.2 billion for drug enforcement, new Border Agents, ICE personnel, enhanced immigrant detention resources, and more immigration judges.

"The federal government remains shut down for one reason and one reason only: because Democrats will not fund border security. My administration is doing everything in our power to help those impacted by the situation. But the only solution is for Democrats to pass a spending bill that defends our borders and re-opens the government," Trump said Tuesday.