As President Barack Obama’s administration has sought to contain the political fallout from a Sept. 11, 2012, attack on a U.S. consulate in Benghazi that claimed the lives of U.S. Ambassador Christopher Stevens and three other Americans, responsibility for the attack, and the failure to properly explain it to the American people, has been assigned to a number of individuals.

Here is a list of those blamed by the Obama administration:

In the run-up to last week’s debate between Vice President Joe Biden and Rep. Paul Ryan, the Obama campaign’s mouthpiece Stephanie Cutter said the killing of a U.S. ambassador, the first such incident in three decades, had become an issue only because the Romney-Ryan campaign had described it as such. 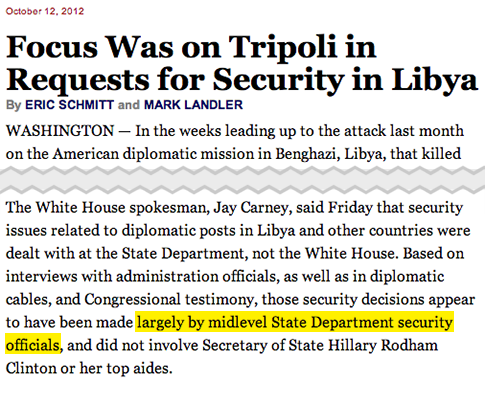 After a hearing in which State Department officials responsible for security at U.S. diplomatic installations in Libya told members of Congress that repeated requests for additional security personnel had been denied by officials in Washington, the  that, "based on interviews with administration officials," the blame belonged to "midlevel State Department security officials."

For weeks after the murder of Ambassador Christopher Stevens, the Obama administration continued to blame the attack on a YouTube video that administration officials deemed offensive to Islam. U.N. Ambassador Susan Rice blamed the video for the attacks even as the State Department and intelligence community had concluded that the attack was not spontaneous but a pre-planned strike launched by an al Qaeda affiliated group.

When the press started asking how it was possible that Ambassador Susan Rice, and even the president, had continued suggesting a YouTube video was responsible for the attack long after it had become clear inside the State Department and elsewhere that the video had little to do with the attack, Rice and Biden both blamed the "intelligence community" for providing the bad information.

Last night, Secretary of State Hilary Clinton did what Obama has been unwilling to do: take responsibility for the murder of four Americans in the Benghazi attack that State Department officials have testified was preceded by numerous warning signs.