Seventy percent of Russian-language tweets targeting NATO military activities in Eastern Europe are generated by automated Russian trolls, according to a survey done by the military alliance.

"Two in three Twitter users who write in Russian about the NATO presence in Eastern Europe are robotic or 'bot' accounts," the NATO Strategic Communications Centre of Excellence stated in a report made public this week.

The Russian bots sent 84 percent of all Russian language messages. English language tweets against the alliance also were found to be automated, with some 46 percent generated by automated Twitter accounts.

The report criticized the global social media platform for not doing enough to counter Russian bot activities on Twitter. "Our impression is that Twitter in Russian is policed less effectively than it is in English," the report said.

A Twitter spokesman could not be reached for comment. Colin Crowell, Twitter's vice president for public policy, stated in a recent post on the company website that "we strictly prohibit the use of bots and other networks of manipulation to undermine the core functionality of our service."

Twitter currently uses automated tools to identify bots and cut off accounts that appear to be automated spammers or other illicit users.

The NATO report said Russian bot tweets were monitored during the survey between March 1 and Aug. 20. A total of 32,000 tweets were surveyed from 11,600 users. 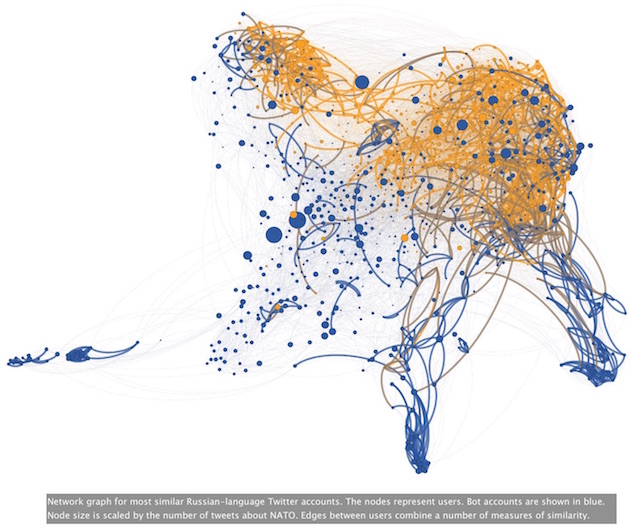 The trolling peaked in May and early June when NATO was holding large-scale military exercises. The English bot tweets peaked in March and April, coinciding with the arrival of Western troops in the Baltic states of Latvia, Estonia, and Lithuania.

Estonia "bore the brunt of Russian-language bot activity" and issues criticized included the arrival of British troops and the deployment of U.S. F-35 jets, along with the military exercises.

"The automatically created content consists of a mix of benign content, (e.g. by media outlets), spam, and politically motivated material," the report said.

"Additionally, numerous imaginary or 'fake' media outlets plagiarize or algorithmically re-write content from other media outlets and post these under their own name," NATO said.

The report said the use of Russian bots to transmit media is a concern because "the Russian-language social media environment is increasingly becoming an extension of traditional offline and online media."

"Most Russian media outlets are either directly or indirectly controlled by the state," the report said. "By implication, even automatically generated Russian news-spam echoes state-sanctioned content."

NATO warned that Russian trolling was undermining the potential for advancing democracy through social media.

"The implications are stark: the democratizing possibilities of social media appear—at least in the case of Twitter in Russia—to have been greatly undermined," the report said.

The practical implications for journalists, policymakers, and analysts who measure Twitter activity is that it could skew public opinion surveys. "Failure to account for bot activity will—at best—result in junk statistics," the report said.

The report was the first of a regular publication called "Robotrolling" on social media published quarterly by the center, an international NATO unit based in Latvia.

The report follows a Defense Intelligence Agency report on Russia made public in June outlining Moscow's use of information warfare.

"Russia views the information sphere as a key domain for modern military conflict," the DIA report said. "Information warfare is a key means of achieving its ambitions of becoming a dominant player on the world stage."

The DIA said the Russians utilize an army of trolls to conduct information attacks aimed at altering public narratives in ways favorable to Moscow.

"Russia's Troll Army, also known as the Internet Research Agency, is a state-funded organization that blogs and tweets on behalf of the Kremlin," DIA said.

Kremlin trolls post pro-Moscow content and seek to influence online discussions in a bid to counter negative reports on Russia and head off what the Russians consider negative Western influence.

Among the vehicles used by Russian government information warfare are hacker groups that work for the government or are government-linked but masquerade as non-government hackers, such as the CyberCaliphate and CyberBerkut that have been linked by U.S. officials to Moscow's military hackers.

"Bots can drown out unwanted content or push a specific message," the DIA report said. "Bots have the ability to overwhelm the information space and discourage readers from looking for real content."

Russia's main propaganda themes are the false narratives that the West's U.S.-led world order is bankrupt and is being replaced by a pro-Russian, post-liberal order.

Moscow trolls also use social media to promote the propaganda theme that the West has unfairly demonized Russia and that Moscow's activities are merely a defense of its sovereignty and interests.

Relations between Washington and Moscow have soured in recent months.

On Thursday, the Trump administration ordered Moscow to close its consulate in San Francisco and two diplomatic annexes in Washington and New York.

U.S. intelligence agencies concluded in a January report that Moscow was engaged in a cyber-enabled influence operation targeting the 2016 presidential election.

The DIA has identified Russian information operations against Ukraine in taking over the Crimean Peninsula and covert operations in eastern Ukraine.

Michael Waller, an information warfare expert, said the study is an excellent example of NATO cooperation.

"While we provide the real military might, our smaller frontline allies focus on Russian information operations and psychological ops that we often miss," said Waller, a senior fellow at the Center for Security Policy who has served on the editorial board for the NATO Strategic Communications Centre of Excellence.

"The frontline states in the Baltic region, and allies like Poland, are prime targets of Kremlin trolling offensives," he said. "The Russians are fighting NATO through subversion—circumventing the Article 5 collective defense trigger to weaken the alliance from within."

Automated social media attacks are one part of the subversion campaign and have already caused friction within the alliance.

"This report is vital to show NATO planners one of the ways the Russians are waging psychological warfare against us in peacetime," he said. "It should help us to craft appropriate defensive and offensive countermeasures and a better strategy overall."