One of the country's leading gun makers saw earnings triple as gun sales once again shattered previous records for the month of July.

July 2020 saw an estimated 1,795,602 gun sales—a new record and an increase of 133 percent over July 2019, according to a Washington Free Beacon analysis of FBI data. July is the fifth consecutive month to set a gun-sales record. Chris Killoy, chief executive officer of Sturm, Ruger & Company, said the current spike in sales is unlike anything he has ever seen. The buying spree shows no signs of slowing down and heavy demand will "sustain itself" into the fall, Killoy predicted.

"Having been in this industry for 30 years, I saw the surge in 1994 before the assault weapons ban took place," Killoy told investors on Thursday. "This is probably the strongest level of demand that I've seen. One of the most significant differences is how it has impacted all levels of the channel and the impact on inventory at all levels."

The spike in FBI background checks and coinciding earnings at the gun-industry giant indicate an explosion of new gun ownership as Americans deal with the coronavirus outbreak and national unrest. FBI background checks indicate 2020 has now seen at least 10 million guns sold—many to first-time buyers and minorities. 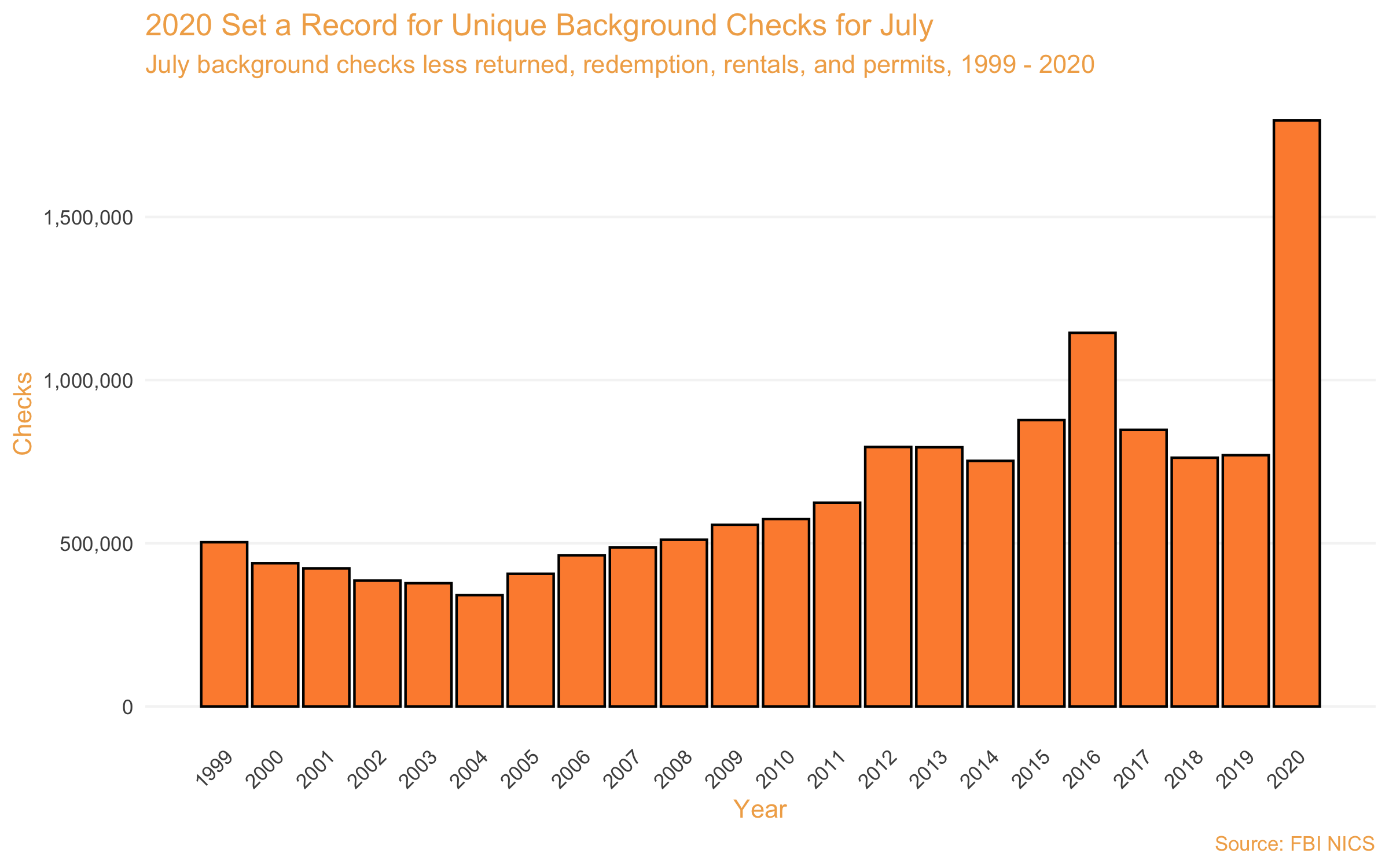 "This staggering increase in demand appears to be attributable to a few factors," Killoy said. "Number one, concerns about personal protection and home defense stemming from continuing COVID-19 pandemic; protests, demonstrations, and civil unrest in many cities throughout the United States and, lastly, the call by some for the reduction in funding and authority of various law enforcement organizations." 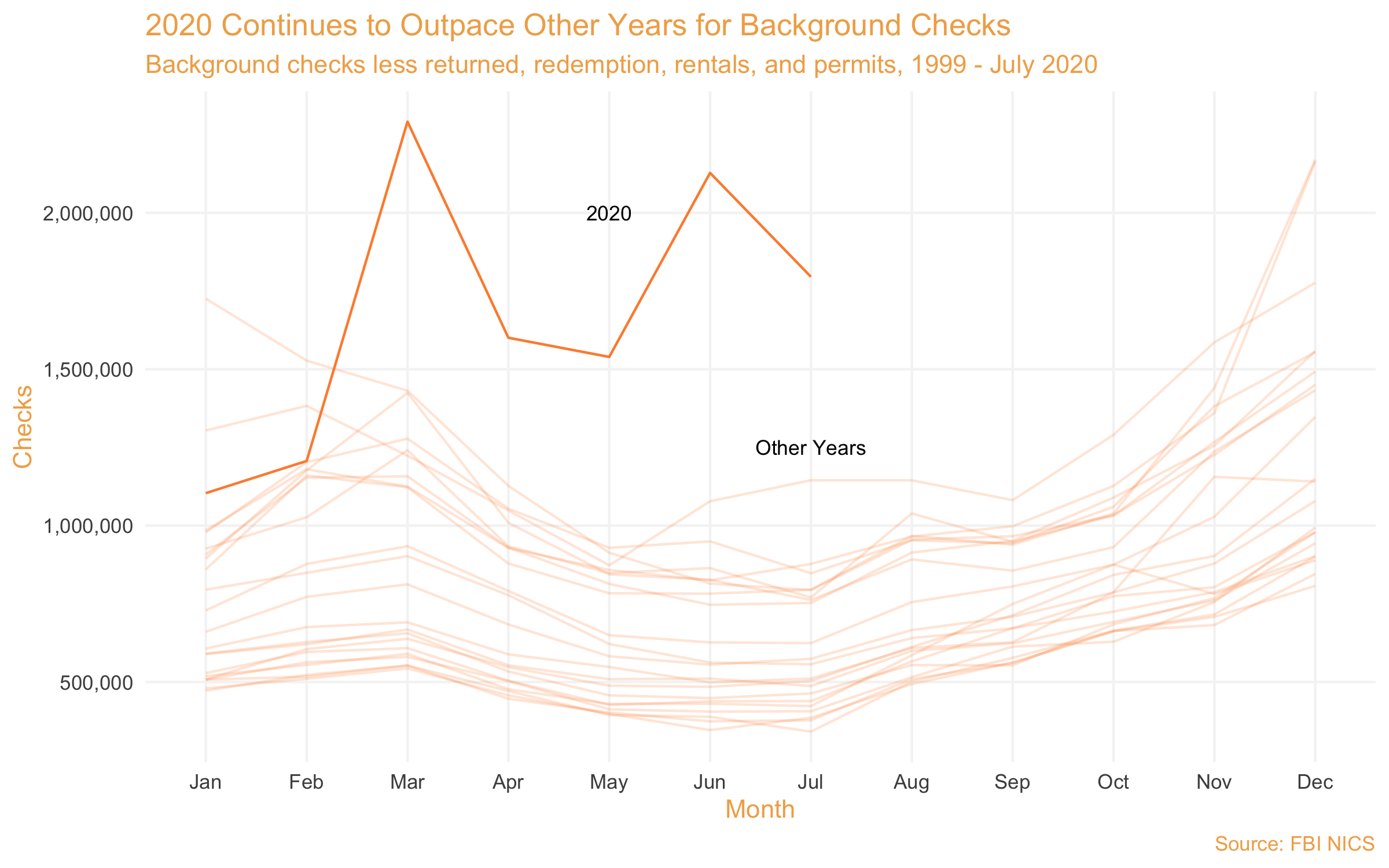 Killoy said the coronavirus prevented the company from hiring new personnel between March and June due to concerns over spreading the virus during training. He said the company instituted sanitation and social distancing measures and encouraged employees to work remotely when possible. It also provided its 1,600 employees with an additional two weeks of paid time off. However, Killoy said the impact of the virus on the company's ability to manufacture guns was "negligible" and that the company had been working at full tilt since March.

"We never lost a day of production. We had some impacts to individual lines for a shift or two, but in all cases, we’re able to keep all of our factories open and operating," Killoy said. "The demand was solid throughout.... We got used to dealing with COVID-19. And our practices and procedures really solidified and we were able to become much more of a routine."

Killoy cautioned "the future impact of COVID-19 remains uncertain" for the company but said it is well positioned to handle any challenges the virus might pose.

Checks done through NICS are widely considered the best indicator for the number of gun sales in the United States over a given time period because nearly all sales done by licensed dealers, like gun stores, require a check to be conducted. The Free Beacon eliminated all checks in the monthly NICS report that aren't directly associated with gun sales, including gun-carry permit checks, to reach its final number. The resulting total represents only a best estimate as not all individual gun sales are captured by the system.