An average of over 50 gunshots per day have plagued Minneapolis since the police killing of George Floyd led to city and nationwide protests, prompting fears that hostility to the police is driving a violent crime wave.

The bloodshed has included gunfire at a park full of children in broad daylight and more than 70 rounds loosed on a crowded street in the city's Uptown. The Star Tribune reports that the violence has also spread to St. Paul, with firearms discharges double 2019 levels.

This violence, coming amid rising anti-police sentiment, raises the specter of the much-debated "Ferguson effect," originally coined to refer to a rise in violence coincident with—and, some argue, caused by—the 2014 protests sparked by the police shooting of Michael Brown in Ferguson, Mo. Minneapolis, the city council of which is moving to disband its police department amid public hostility, seems like a perfect test of whether the effect holds today.

Official data released by the Minneapolis Police Department, however, paint a complicated picture of crime in the city. Floyd's death on May 25 was followed by an unprecedented spike in gun assaults, but overall levels of crime in the ensuing weeks have remained in line with historical trends.

This equivocal finding, crime data expert Jeff Asher told the Washington Free Beacon, is part of what makes it hard to "[come] up with a real, coherent, evidence-based explanation" definitively linking the spike to police-skeptical sentiment. More data are needed to judge whether renewed protests will spark another surge in crime.

The shootings plaguing Minneapolis are unprecedented in the past 10 years. Although the summer months generally see a spike in violence—a trend well known to criminologists—data from the city's ShotSpotter gunshot detection systems paint a stark picture. 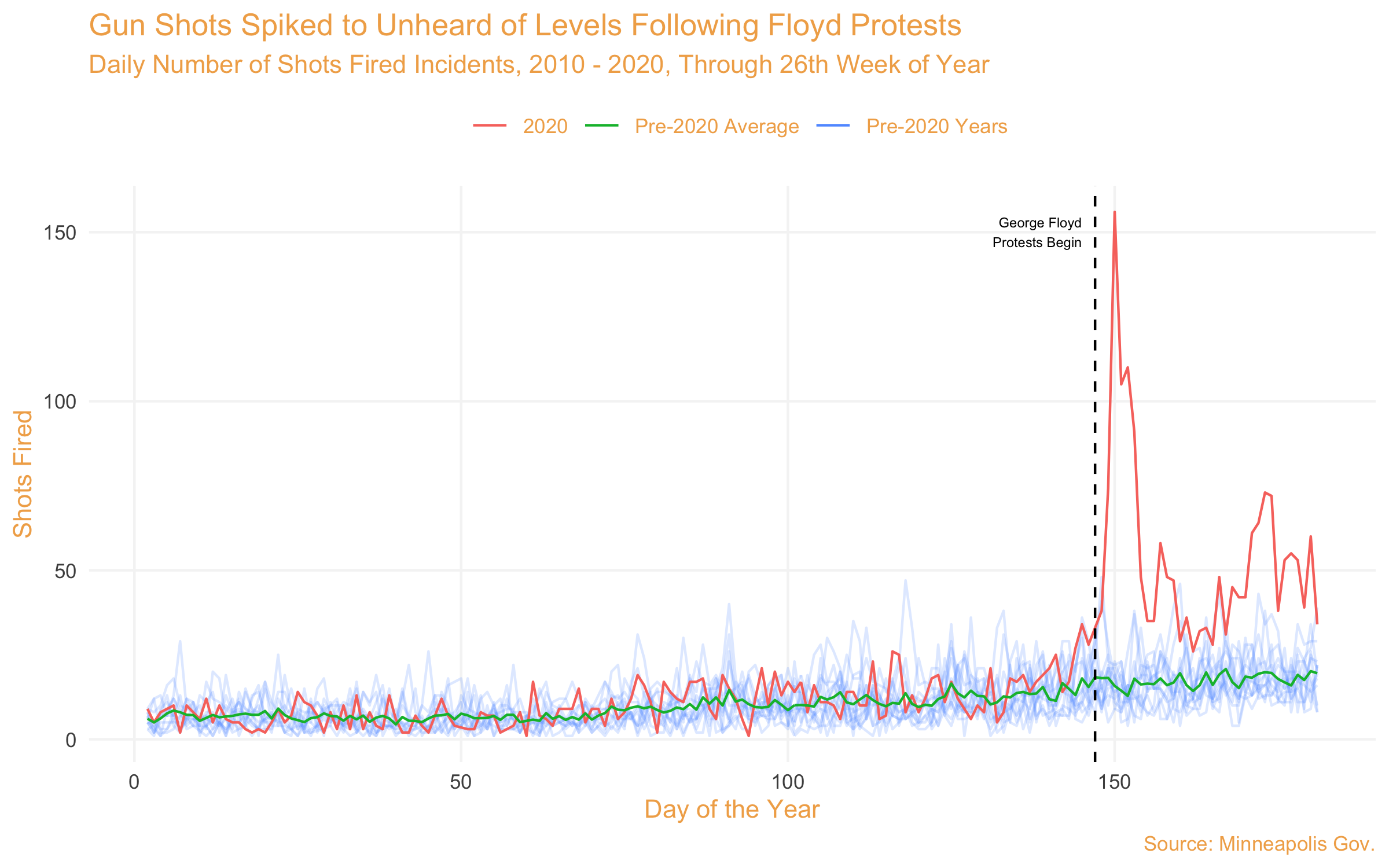 Prior to May 25, shots-fired incidents tracked the past decade. Then, they exploded: Friday, May 29—the height of what Minnesota governor Tim Walz (D.) called the "absolute chaos" of protests and rioting—recorded 156 shots in one day.

Since then, gun violence has remained elevated. Many of those injured are the city's black men, police chief Medaria Arradondo told CBS Minnesota, adding, "We are having people settle their disputes by picking up a gun and shooting."

Manhattan Institute fellow Heather Mac Donald, a well-known proponent of the Ferguson effect theory, has argued that Minneapolis's experience is indicative of a new wave of violence.

"The timing, the severity of the crime increase, the fact that it follows the previous pattern, and the degree of stigma against officers today, especially in Minneapolis, is so much greater than we saw in the first iteration of the Ferguson effect," Mac Donald told the Free Beacon. "We already saw what happened back then, I wouldn't expect anything to be different with the relation of officer de-policing and the emboldening of criminals."

That tracks the theory that Mac Donald and others have argued for. After the highly publicized shooting of Michael Brown, confidence in the police plummeted and officers reported that they were more worried about their safety and less willing to make stops. The result, some argue, was a police withdrawal, which resulted in the increase in homicide in 2015 and 2016.

The shots data, however, are only part of the story, and crime incidents reported by the police paint a more complicated picture. The actual number of felonious crimes has followed the historical trend—a finding that challenges the notion that lawlessness is on the rise. 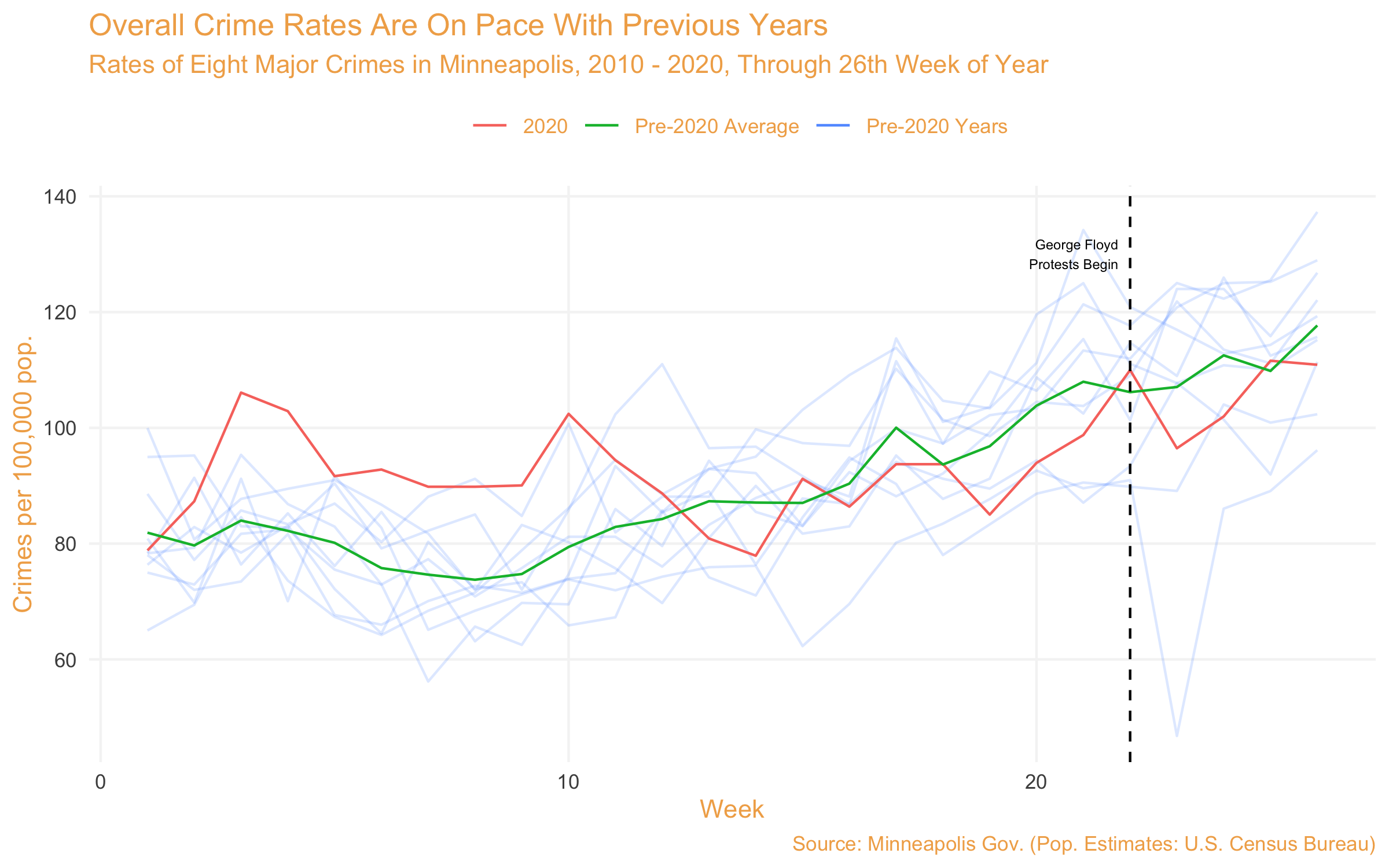 A closer look at the data broken down by offense provides a more nuanced picture. Only rates of assault—particularly, second-degree assault, meaning assault with a dangerous weapon—have consistently risen since Floyd's death. 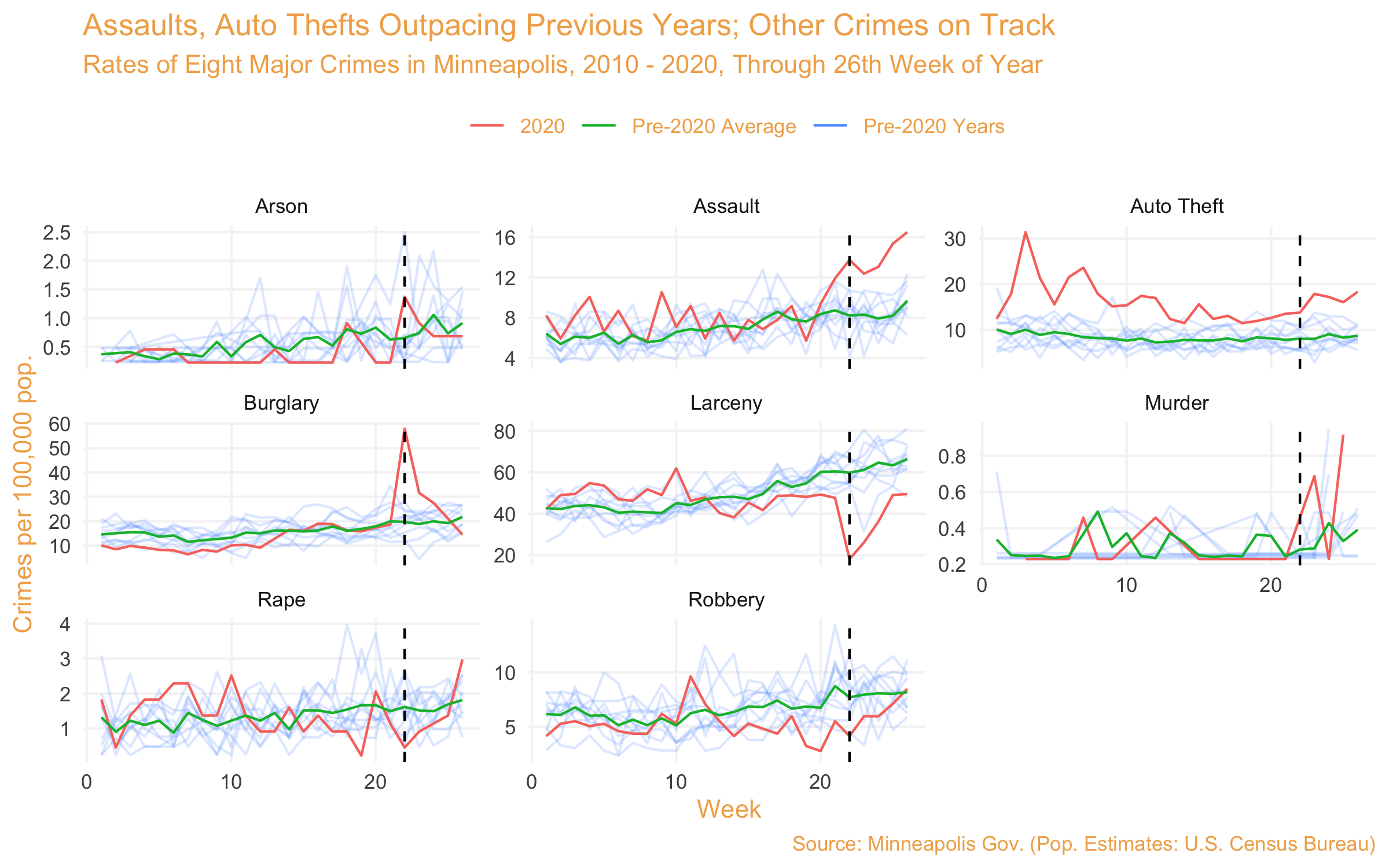 Auto theft is up over previous years, but that increase predates May 25; burglary spiked briefly, but a concurrent drop in larceny suggests that discrepancy may be partially due to a coding error. Rates of rape, robbery, and arson are not out of line with historical norms.

The spike in gun violence definitely supports a renewed Ferguson effect, but the ambiguity suggested by many crimes going unaffected means the case is not conclusive. As it turns out, such ambiguities have long characterized debate around the Ferguson effect.

Some scholarly evidence backs up the idea that public pressure on police increases crime. Research from Baltimore found that Brown's death in Ferguson caused police to pull back, while crime rose and arrests fell after the police killing of city resident Freddie Gray. A paper released earlier this year found that cities with police departments under investigation after "viral" police shootings saw substantial spikes in violence.

Other research, however, disagrees. A 2019 study argues that declines in arrests in cities predate both Ferguson and the homicide spike, while a 2016 analysis grants that there is "a Ferguson Effect on homicide rates in a few select cities" but discounts a systematic effect on crime nationwide.

So is Minneapolis experiencing a Ferguson effect or not? Mac Donald thinks so, arguing that "it is precisely the gangbanging shootings, the drive-bys, these insane shootings that take children's lives, that are the most susceptible to de-policing." That, she said, is because such crimes are most likely to be discouraged by the proactive stops that police are currently unwilling to do—a sentiment echoed by leaders of the Minneapolis police union.

Asher, however, urged caution, emphasizing that just because a trend changes after a particular event does not mean the event caused the change. He pointed out that a more general rise in homicide in the country—which some commentators have pinned on anti-police protests—actually predates May 25. Inferring cause is complicated, he argued, and other factors, including the coronavirus lockdown, may be at play.

"It's really hard to say 'x' is the cause of it," Asher said. "In a place like Minneapolis, there's clearly a spike, but what it means is a lot more difficult to determine."