No strings attached to cash destined for Iran

Iran has been granted absolute control over more than $4 billion that will be unfrozen and returned to Tehran under the recently enacted nuclear accord, causing concern that the cash will be used to fund terrorism.

The billions in cash come with no strings attached, meaning that Iran has complete authority over how the funds are spent—and the U.S. government cannot ensure that it will not go toward terrorism.

The White House did not mandate oversight of the funds under the nuclear deal, leading to concerns that one of the world’s top terrorism sponsors will give a cash infusion to radicals across the Middle East.

"Once the money is transferred to Iran we have no ability to determine how that money is allocated," said Jonathan Schanzer, a former terrorism finance analyst at the Treasury Department, which is tasked with enforcing sanctions on Iran.

The U.S. State Department has designated Iran as the world's "most active state sponsor of terrorism."

"There is no guarantee this cash is going into some fund that will help Iran’s purported moderates," Schanzer said. "This is going into the account of the Islamic Republic, which can be dispersed to a wide range of different actors, many of whom are bad."

Iran’s elite Revolutionary Guard Corps (IRGC), for instance, has been known to wage clandestine terror operations across the globe and train radical forces.

Iran also is the principal backer of Hezbollah, which has long terrorized Israel and is currently operating on Tehran’s behest inside Syria to bolster embattled President Bashar al-Assad.

Other Iranian-backed militias have operated in Iraq and Afghanistan, where they have been known to carry out terror attacks against U.S. and Western forces.

"What has gone overlooked largely is that these funds could be handed to other bad actors that work for or on behalf of the Iranian regime," Schanzer said.

Iranian funds have long been frozen in banks across the globe under strict sanctions imposed by the United States. As these sanctions are rolled back under the nuclear deal, the once frozen funds will be sent to the Central Bank of Iran (CBI).

Iran is set to repatriate more than $4 billion in the next several months as its accounts are unfrozen.

The White House is staying quiet on the issue.

When asked last week "what safeguards will be in place to make sure that money is not funneled to terror groups by Iran," White House Press Secretary Jay Carney declined to answer.

Congressional insiders say that the White House dropped the ball by not mandating oversight of the unfrozen funds.

"It's really unconscionable to think America is now funding both sides of the war on terror," said one senior congressional aide working on sanctions.

Congress cannot exercise its own oversight of the funds since it has not been given a say in the Iran deal.

"Can you imagine being an American solider fighting in Afghanistan learning the Iranian IED that just killed their friend was funded by U.S. sanctions relief?" The source said. "This is the height of policy incompetence."

Secretary of State John Kerry has admitted that he does not know how Iran will spend its newfound cash.

"My prayer is that no solider will be killed as a consequence of anything Iran chooses to do," Kerry told the House Foreign Affairs Committee last year when asked if he could guarantee the money would not go to fund terror.

The White House and its allies have also been working to block a new Iran sanctions bill that would level harsh penalties on Iran should it carry out a terror attack against Americans anywhere in the world.

Sen. Mark Kirk (R., Ill.), one of the leading champions of new sanctions, released a chart on Wednesday that directs viewers to "follow the money we’re unfreezing for Iran." 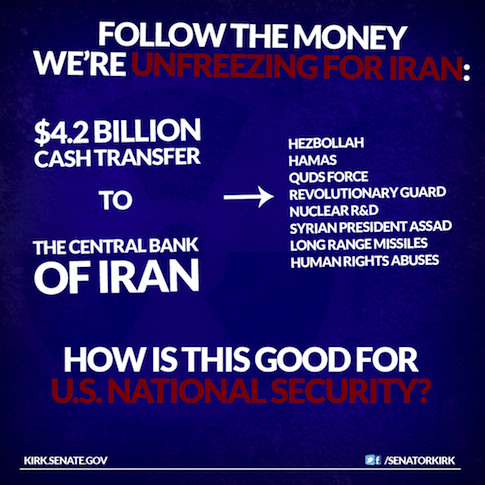 Experts also warn that Iran could also spend the unfrozen funds on its nuclear program.

"These funds could go toward the furthering of the Iranian nuke program or it could help Iran weather an economic storm if it returns to its nuclear program, if it reneges on the deal and makes a dash for the bomb," said Schanzer, vice president for research at the Foundation for Defense of Democracies (FDD).