Iran is renewing threats to assassinate former secretary of state Mike Pompeo, prompting a fresh warning from the State Department that any attempt to take the life of a current or former U.S. official will prompt "severe consequences."

An Arabic-language Twitter account affiliated with the hardline Iranian regime stated during the weekend that Pompeo, who served under former president Donald Trump, should fear for his life.

"Live in fear, liar," the account tweeted, alongside an image of Pompeo with crosshairs on his forehead. The post indicates that Iran wants Pompeo dead as payback for the 2020 drone strike that killed Iranian terror leader Qassem Soleimani. 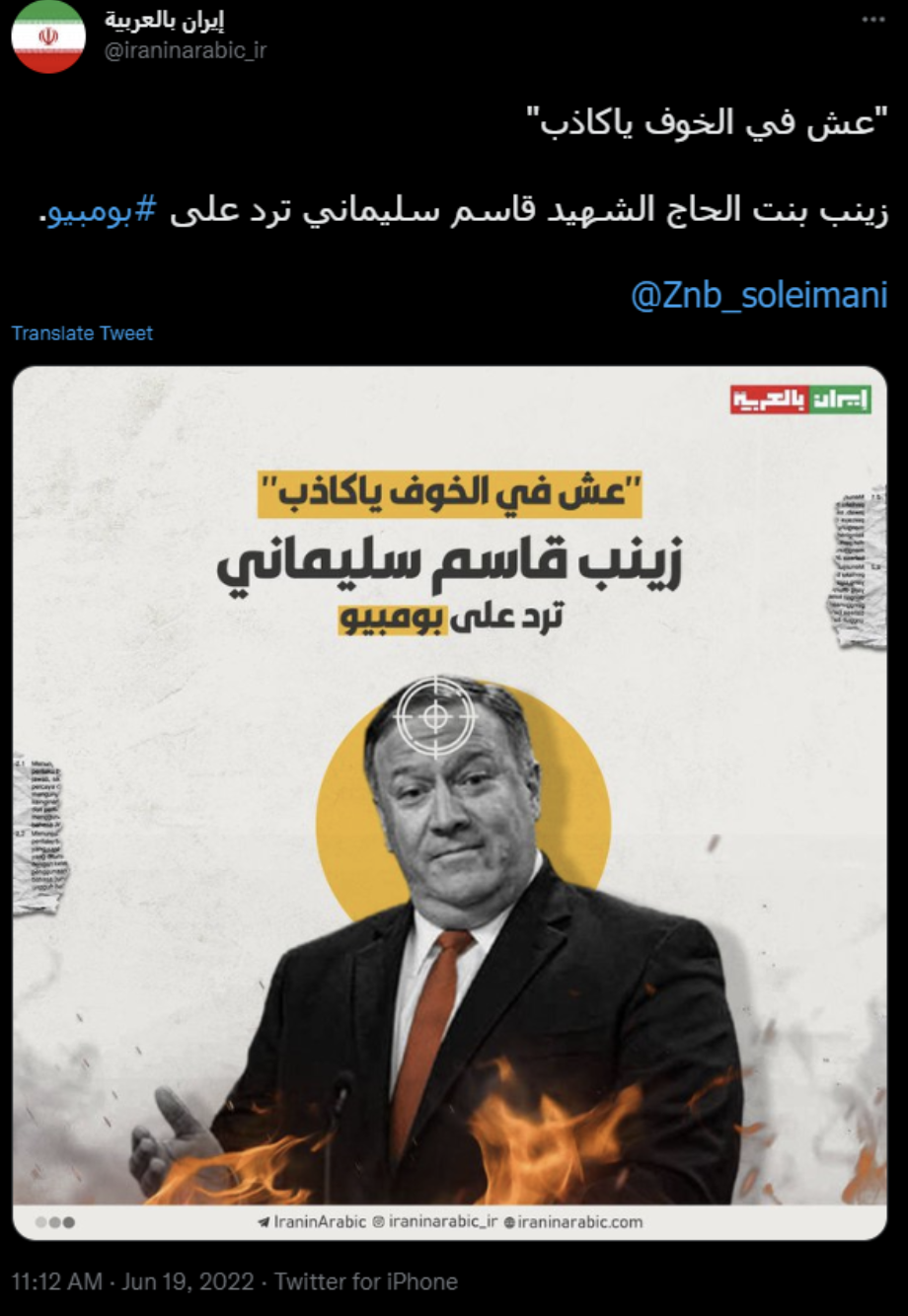 The threats on Pompeo’s life were disseminated again on Tuesday when an account belonging to Soleimani’s daughter, Zainab, tweeted that Pompeo should "live in fear" of an assassination attempt.

Iran is engaged in efforts to assassinate Pompeo and his Iran envoy Brian Hook, who helmed the Trump administration’s "maximum pressure" campaign against Tehran. Pompeo and Hook face "serious and credible" threats on their lives, according to nonpublic reports to Congress, one of which was exclusively obtained by the Washington Free Beacon in January.

The State Department says it is taking these threats seriously, telling the Free Beacon that Iran will face "severe consequences" if it attacks any American official.

As Americans, the official said, "we are united in our resolve against threats and provocations. We are united in the defense of our people. Should Iran attack any of our nationals it will face severe consequences."

The State Department pays around $2 million dollars per month to provide 24-hour security services to Pompeo and Hook.

In January, the State Department informed Congress that a "specific threat persists with respect to former special representative [for Iran] Brian Hook," according to a copy of the nonpublic report reviewed by the Free Beacon. Pompeo is facing similar threats, including to his family.

Cameron Khansarinia, policy director at the National Union for Democracy in Iran, an Iranian-American organization that supports democracy, told the Free Beacon that Iran’s warnings are not rhetorical.

"The Islamic Republic has made its decades-long chants of ‘Death to America’ more specific by calling for the murder of leading American public servants including Secretary Mike Pompeo and Special Representative Brian Hook," Khansarinia said. "These threats by the dictatorship in Iran are not mere slogans, it is this regime's strategy. The Biden administration must take these unacceptable threats seriously. In the long term, as a matter of policy and U.S. strategy toward Iran, we must know these threats will not end as long as this dictatorship is in power."

The latest social media threat is also raising concerns about how Twitter polices its platform. Threats of this nature are routinely disseminated on Twitter, in violation of its own code of conduct, and the accounts remain active.

Iranian dissidents and those critical of the hardline regime also have been targeted with death threats on Twitter.

Saeed Ghasseminejad, an Iran analyst at the Foundation for Defense of Democracies, was threatened earlier this month by a Farsi-language account that solicited Iran’s Ministry of Intelligence and Security (MOIS) to conduct an assassination.

Republican lawmakers have accused Twitter of a double standard, saying it has deleted the accounts of conservative voices while allowing other accounts to disseminate death threats. House Republicans in 2022 introduced legislation to ban social media networks from providing accounts to designated terrorists and terror groups.