And giant it is. ULA will send an Advanced Extremely High Frequency satellite into orbit for Space Force on its Atlas V 551 rocket, the most powerful in its arsenal. The rocket, which Bruno called "the Bruiser," weighs 1.2 million pounds pre-launch. The satellite itself weighs 14,500 pounds when fully fueled and strapped to the rocket, or about 2.5 Ford Expeditions. The launch will create 2.25 million pounds of thrust.

The mission is about much more than brute force—it will establish infrastructure that will strengthen America’s military presence on earth. The satellite will become the sixth of its kind in orbit for the United States, creating a constellation that gives America complete global communications coverage.

"This is the most sophisticated, most powerful communications satellite that has ever been launched," Bruno said. "All the way around the world, our troops can be communicated with, can have the high bandwidth, back-and-forth comms, imaging, and intelligence that they require, right down to a guy in a tent with a handset who's doing his thing."

While Bruno acknowledged the possibility of extraterrestrial conflict in the future, the satellite system would serve as a defense hub, not an offensive weapon. He compared it to an aircraft carrier that "needs to be protected by destroyers, submarines, cruisers."

"What the Space Force is being tasked to do is put up a big, sophisticated spacecraft that our country depends on to be secure. And then also make sure that those things are protected in orbit," he said. "They are discouraging people who might want to take terrestrial conflict and extend it to space, which has always been a traditionally peaceful domain, as well as the ultimate high ground for things like communications. So this is all about Space Force, this is the marquee mission."

The satellite system is also shared with the United Kingdom, Canada, Australia, and the Netherlands, allowing America to work with its allies on space-enabled missions, Bruno said.

President Donald Trump established Space Force in December as the United States lagged behind China and Russia in the final frontier. Those nations have worked to challenge American superiority in space, with China deploying missiles capable of destroying some American satellites, according to a 2018 Pentagon intelligence report. Bruno called the dynamic a "big problem" in national security.

"It is a big problem that the Department of Defense recognizes and has jumped in with both feet. The creation of a Space Force is just one manifestation of that concern and that focus," Bruno said. "[Space Force] is literally conducting war games with real, expected, and even theoretical capabilities to figure out what that architecture in space has to look like." 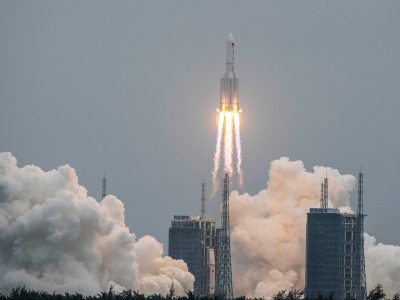