Crooked Media, the content mill founded by former Obama administration officials, tweeted and then deleted a message urging its supporters to send money to an anti-Semitic charity that has been tied to terrorism.

The company in a Tuesday tweet asked its followers to support several charities, including Islamic Relief, a global charity that several countries have banned for allegedly funneling money to Hamas, the Iranian-backed terror group that is firing thousands of rockets at Israeli civilians.

"Here's who's doing great on the ground work to aid the people of Gaza," Crooked Media wrote in a since-deleted tweet. "Support them if you can." 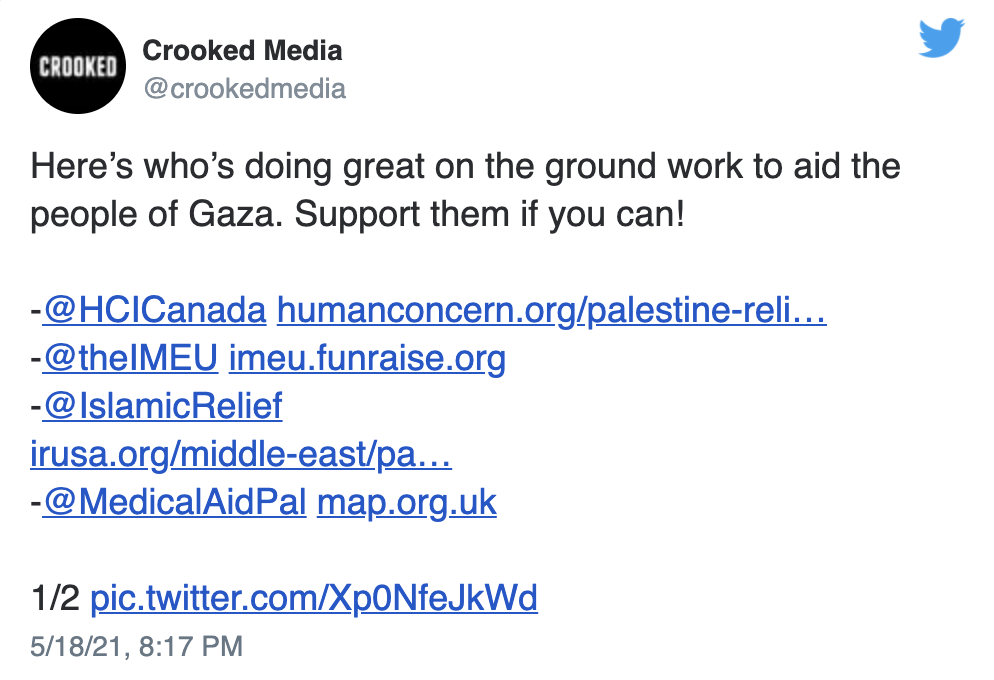 As violence rages in Israel, Crooked Media, which was founded by Obama White House staffers Jon Favreau, Jon Lovett, and Tommy Vietor, has focused on the humanitarian situation in the Gaza strip, where the Hamas government bases its terror operations and uses human shields to increase civilian casualties. The company's promotion of the Islamic Relief charity comes just months after the State Department cut its longstanding ties to the organization's umbrella organization, Islamic Relief Worldwide (IRW), citing its promoting of anti-Semitism. Islamic Relief Worldwide and its leaders, the State Department said just before former president Trump left office, consistently make anti-Semitic statements and express support for terror groups like Hamas.

Social media posts from the Islamic Relief's senior leaders have praised Hamas leaders and referred to Jewish people as the "grandchildren of monkeys and pigs."

Israel designates the charity as a supporter of terrorism. Congress in 2017 sought to ban the American government from providing funding to the charity, which at the time was receiving taxpayer aid from the Obama administration.

James Richardson, director of the State Department's Office of Foreign Assistance, told the Free Beacon in January that Islamic Relief Worldwide is no longer a partner charity. "Given what we know about IRW, the Department and [the United States Agency for International Development] should act with extreme caution and avoid partnering with IRW in the future."

Israel's security services in 2014 accused IRW of funneling money to Hamas. The country's Shin Bet security organization reportedly provided "incriminating information against IRW" that led to its being banned from operating in Israel and the West Bank, according to NGO Monitor, a watchdog group that tracks non-profit groups.

Islamic Relief Worldwide also acted as a "hub for donations from charities accused of links to Al Qaeda and other terror groups," according to a 2013 investigation conducted by the Gatestone Institute.

The charity was founded by the Union of Good, a U.S.-designated terror organization that Hamas created to funnel money to its terrorist activities, according to NGO Monitor.

In 2006, an IRW employee in the Gaza Strip was arrested by Israeli authorities on charges of transferring funds to Hamas. The employee also reportedly admitted to working directly with Hamas members.

Crooked Media did not respond to a request for comment.

Crooked Media has been critical of Israel on Twitter. In particular, Vietor has accused the country of using too much force as it seeks to root out Hamas.