The New York Times Finally Finds a Scientist It Doesn't Like

More than a year has passed since Nikole Hannah-Jones, a New York Times reporter of moderate notoriety, was published in the paper that employs her, a Washington Free Beacon analysis has determined.

According to the Times website, Hannah-Jones is "a domestic correspondent for The New York Times Magazine." The Free Beacon's analysis, inspired by semi-prominent Twitter user Jeff B., found the reporter's most recent Times byline—in the magazine or otherwise—appeared some 386 days ago, on June 24, 2020. "It's Time for Reparations," a Hannah-Jones magazine feature, was published more than six years after celebrity writer Ta-Nehisi Coates penned "The Case for Reparations" for the Atlantic. 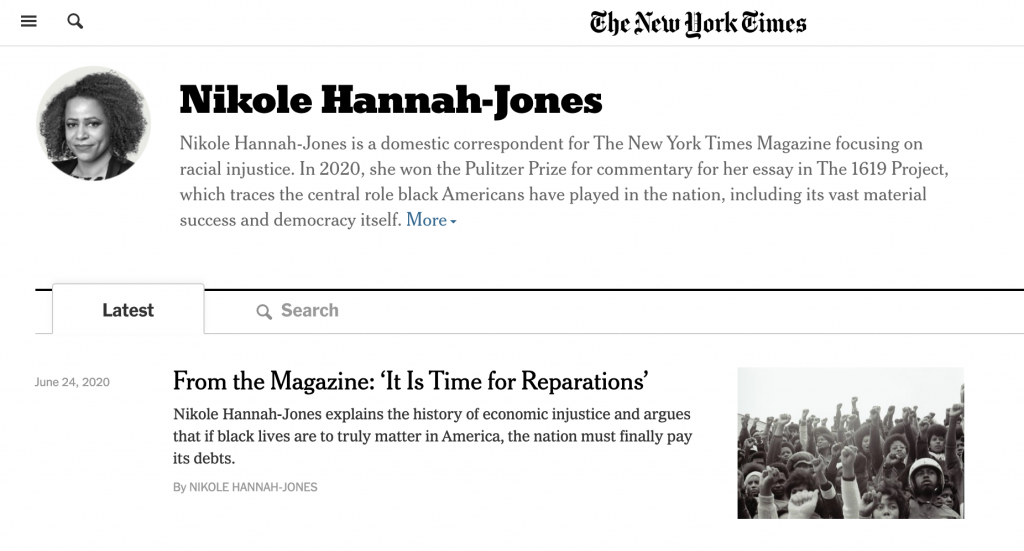 The New York Times did not respond to a request for comment on Hannah-Jones's employment status, or whether it was standard practice for a full-time reporter to go more than a year without a published byline.

Hannah-Jones responded directly to Jeff B., who had simply pointed out the amount of time that had passed since her last byline in the Times, and the curious lack of discussion surrounding her absence from the publication's pages. "Wasn't aware you paid my salary at a private company where my bosses know what I'm working on," she wrote on Twitter. "Y'all are really weirdly obsessed. It's not becoming and sort of creepy."

Hannah-Jones's lack of journalistic output has not prevented her from making news. After initially signing a five-year, $900,000 contract in February to join the journalism faculty at the University of North Carolina, she became embroiled in a controversy over the school's refusal to offer a tenured position.

Academic experts told the Free Beacon the university made the right call by not immediately offering Hannah-Jones tenure, given her lack of academic experience and the contested nature of her journalism. History scholars, for example, have "vigorously disputed" the factual accuracy of the 1619 Project, her most prominent piece of work since joining the Times in 2015.

After weeks of public outcry, the University of North Carolina eventually voted to offer Hannah-Jones a tenured position, which she rejected. Instead, the journalist accepted a tenured position at Howard University as the inaugural Knight Chair in Race and Reporting at the Center for Journalism and Democracy, where she will be joined by Coates, the celebrity writer. The position is funded in part by the Ford Foundation, a left-wing nonprofit that has donated more than $2 million to government-run universities in China.

In addition to her work on the 1619 Project, Hannah-Jones is best known for violating Twitter's terms of service, as well as the Times's social media guidelines, by doxxing a Free Beacon reporter. She is also a talented pundit capable of insightful takes. For example, she has claimed socialism is responsible for what she described as the racial harmony in Cuba, of all places.

Hannah-Jones is also one of the most prominent colleagues of teen business reporter Taylor Lorenz, a grown woman who recently attended a TikTok celebrity's 16th birthday party in Los Angeles. Lorenz, like Hannah-Jones, often responds to criticism by accusing her critics of being "obsessed" with her.

The New York Times Finally Finds a Scientist It Doesn't Like