Fifty women from America's 50 states went to Capitol Hill last month to meet with federal lawmakers in an effort to advocate for gun rights.

The D.C. Project spent four days at the end of June walking the halls of Congress and meeting with representatives and senators about firearms policy. This year is the third year in a row in which the group met with lawmakers. The group said their goal was to change the impression many lawmakers have of gun owners as well as counter recent antigun protests.

"When women and students make demands against our freedoms, it is important that our legislators know that those protesters do not speak for everyone," Robyn Sandoval, a member of the group and executive director of A Girl & A Gun Women's Shooting League, said in a statement. "We have more women than ever before wanting to exercise their Second Amendment rights to protect themselves and their families. We have youth who are dedicated to their marksmanship sports. Our lawmakers need to know our stories." 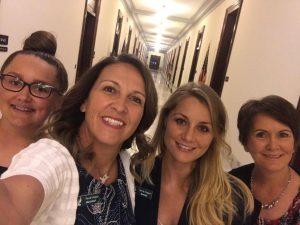 Corinne Mosher, a competitive shooter and firearms instructor from Kansas, told the Washington Free Beacon she joined the effort in order to protect the Second Amendment.

"The Second Amendment is the addition to the Bill of Rights which ensures the protection of all other inalienable human rights," she said. "The Founding Fathers prepared a way to ensure that the country they fought for remained free. I joined the D.C. Project to add more strength to the voices who remember and uphold the true meaning of the Second Amendment."

Mosher, like the other delegates from the D.C. Project, funded her own trip to Washington, D.C. Mosher and the other delegates spent their time meeting with senators, congressmen, and staffers from both sides of the aisle. In addition to meeting with lawmakers on the Hill, they also invited them to the range to shoot with certified instructors and competitive shooters. The effort culminated in a rally in front of the Capitol Building featuring all of the women as well as speeches from politicians and gun-rights activist Dick Heller.

"We had excellent meetings in every office that we visited and had several groups join us on the ranges on Saturday and Sunday," she told the Free Beacon. "Everyone we spoke to seemed interested in our point of view and the stories we shared explaining why we felt the Second Amendment was important to us. I'm extremely pleased with how the trip went." 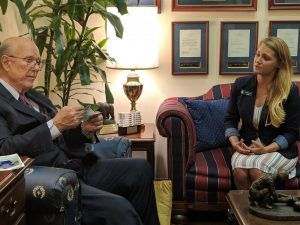 She said the advocacy helped move the D.C. Project closer to its goals.

"We approached this project with three goals: First, to present a real face and story of a Second Amendment supporter to counter the negative stereotypes and misrepresentations out there," Mosher said. "Second, to invite legislators and their staffers to visit a gun range and shoot with qualified instructors in a clean, friendly, and educational environment. Our third goal was to offer our knowledge, skills, and experiences as a resource to legislators."

The group hopes to become the face of the gun-owning public for many lawmakers and a resource for them during future conversations over firearms policy.

"We hope to develop long-term relationships with lawmakers that will be beneficial when they are dealing with Second Amendment-related issues," Mosher said.