A powerful Philadelphia union said that the indictment of its president and political director has not affected its political activism.

Several International Brotherhood of Electrical Workers Local 98 (IBEW) officials, including longtime leader John "Doc" Dougherty and political director Marita Crawford, were charged with using worker dues to buy political influence and enrich themselves. A union spokesman said the January indictment has not altered its plans to continue acting politically to advance the interests of its members.

"There have been no discussions yet what we will do politically," spokesman Frank Keel told the Washington Free Beacon.

The Department of Justice also indicted Local 98's former political director Bobby Henon, who now serves as the City Council's Democratic majority leader. Keel said that rather than making the union toxic, they have seen an outpouring of support from lawmakers, other union officials, and other influential movers and shakers inside the city.

"Within political circles, within the membership, and within the broader union environment, the support of this union and its leadership has been almost universal," Keel said. "We are very grateful for the outpouring of support of all factions across Philadelphia, including from elected officials."

IBEW, which represents more than 4,000 workers, is a big campaign spender on the local and national level. It has spent $40.6 million on federal elections since 2008, according to the Center for Responsive Politics. From 2008 to 2016, the most recent on record, it has spent nearly $10 million of its membership dues on political activities and lobbying, according to federal labor filings.

Local labor watchdogs said the case could dramatically alter the political scene in Philadelphia as it moves forward. Wally Zimolong, a Pennsylvania attorney who has filed suit against labor organizations over forced dues and worker violations in the past, said Local 98 has been one of Philadelphia's prime political forces over the years. He singled out Dougherty as "the keystone of the ‘Last Union Town in America.'"

"If he is found guilty, his absence will reverberate through Pennsylvania business and politics for years," Zimolong said. "The way things have been done will never be the same."

Henon, Doughtery, and the other union officials charged in the federal probe have all pleaded not guilty to the charges. Keel said all of the union officers continue to collect their paychecks and work on behalf of members, emphasizing that there "has been no change whatsoever" in their job status. He added that there is no reason to punish any official because Local 98 expects all involved to be exonerated. The officers are responsible for hiring their own legal defense, but the union publicly stands by them and will continue to defend its reputation.

"We are fighting these charges and expect to be cleared at the end of a long process," he said. "We will be mounting a ferocious defense." 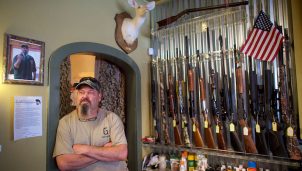