The Open Society Policy Center (OSPC), a D.C.-based nonprofit that has pushed funds toward advocacy that includes making gun companies liable for crimes committed with firearms, fighting Trump judicial nominations, and on issues related to immigration enforcement, dropped $24 million into lobbying efforts during the fourth quarter of 2019, disclosures filed Monday show. The money is the most the group has ever spent in a three-month span and propelled the group to its highest annual lobbying totals to date.

Soros's lobbying shop has now poured nearly $100 million into advocacy efforts since President Donald Trump took office—$40 million more than it spent over the previous 14 years combined. OSPC ranked as a top-three spender, ahead of corporate giants Amazon, Facebook, Boeing, and Alphabet in recent years. The explosion in lobbying cash shows the extent the financier's group is devoted to pushing back against the administration and bolstering the efforts of other progressive advocacy groups that are resisting the president's agenda. 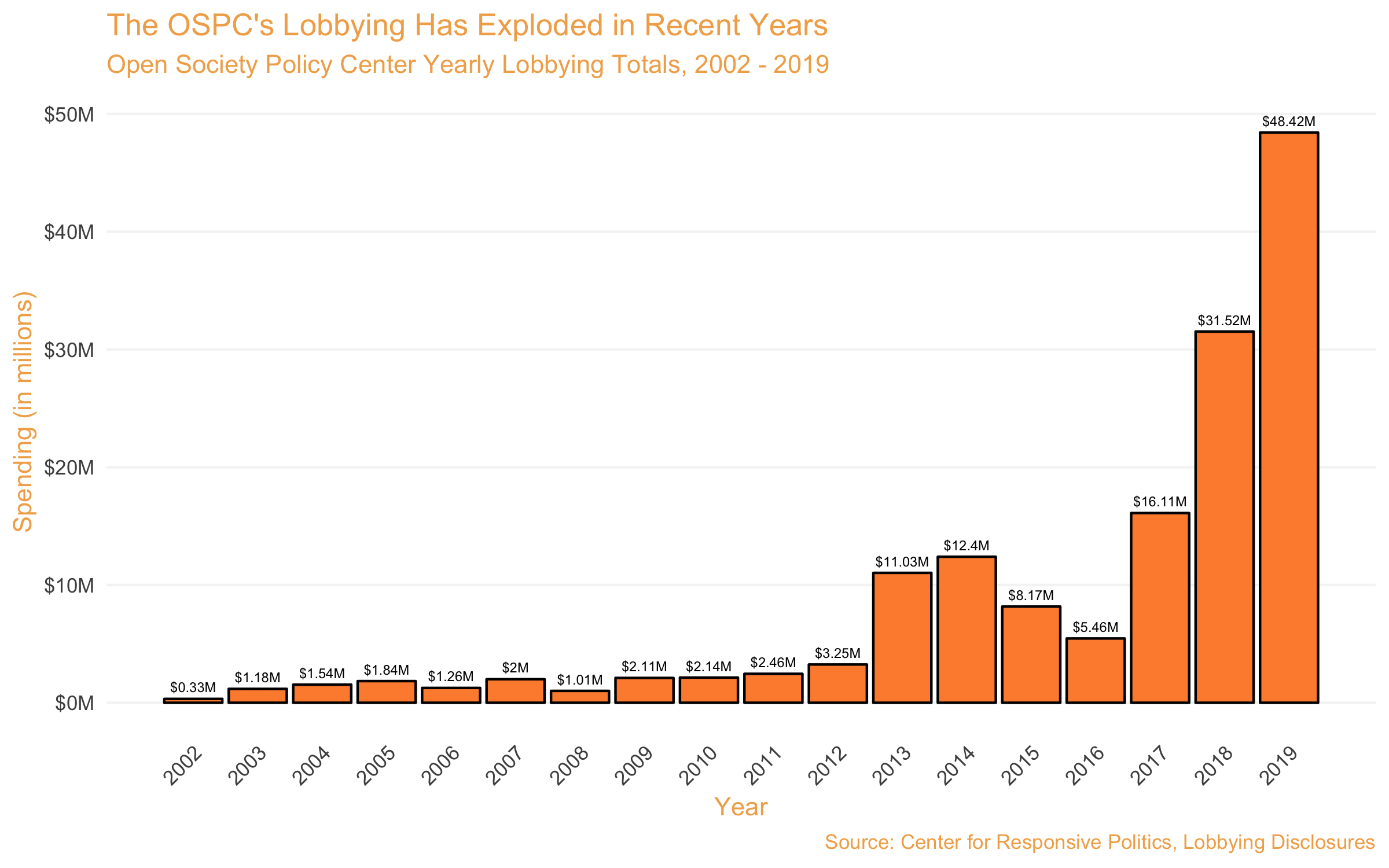 The OSPC, which acts as the advocacy arm to the Open Society Foundations network, uses two in-house lobbyists. The group also gives grants to like-minded groups for their own lobbying activities.

The group pushed nearly $24.5 million into such activities between Jan. 1 and Sept. 30, 2019. Some of that money went toward an effort to repeal an act protecting firearm manufacturers from liability for gun crimes. During the fourth quarter, which runs from Oct. 1 to Dec. 31, the group lobbied the House of Representatives and Senate on the Further Consolidated Appropriations Act 2020, the National Defense Authorization Act for Fiscal Year 2020, and issues related to national security powers, its new form shows. Lobbying reports only list the issue being advocated and do not disclose exactly what the groups are pushing.

More than $20 million was passed to dozens of liberal groups for their own lobbying efforts and organizational support throughout the year. The groups that receive the grants are active in pushing back against policies such as the repeal of Obamacare and President Trump's tax cuts.

During the third quarter, for example, grants of at least $1 million were made to the Sixteen Thirty Fund, Community Change Action, Emgage Action, Indivisible Project, Tides Advocacy, and Virginia New Majority, according to the group’s website. Money was also passed to liberal activist groups to support policy efforts on immigration, sexual health and rights, government accountability, and environmental policy, among other initiatives. Its fourth-quarter grants are not yet publicly posted.

"Too often, powerful corporate interests have a seat at the table in Washington, while workers, consumers, and patients are excluded from the political process," said Tom Perriello, executive director of the OSPC. "OSPC's grantees help give voice to those who need to be heard at this unprecedented moment in America. We are proud to do our part, along with our grantees, to stand against hate, bigotry, and anti-Semitism; corporate greed; presidential overreach and more."

Soros's group has now pushed $96 million into advocacy efforts since Trump was sworn into office. The OSPC reported spending a combined total of $56.65 million from 2002 to 2016, nearly $40 million less than it spent in the three years since the start of the Trump presidency.