RICHMOND, VA.—Thousands of NRA supporters turned out at Virginia's capitol building on Monday in a show of opposition that pushed Democrats in the state legislature to moderate or abandon some of their strictest gun-control proposals.

"We are beyond impressed by today's turnout," D.J. Spiker, Virginia state director for the NRA's Institute for Legislative Action, told the Washington Free Beacon. "You can see the passion and enthusiasm that the citizens of Virginia have in joining us in this fight."

The presence of gun-rights supporters at the state Senate judiciary committee hearing appeared to have an impact, as Democrats formally withdrew S.B. 16—a hotly-contested bill that would have effectively confiscated AR-15s and similar firearms—and moderated several other proposals. The NRA, however, said the changes were not enough and promised to continue to oppose the bills as they continue to move forward in the coming weeks.

"While there were some improvements to some of these bills, overall, it's still bad legislation," Spiker said. "Putting in more regulations and making it more onerous on the law-abiding citizens of Virginia is not something we stand for."

Gun-rights proponents who spoke with the Free Beacon after the committee meeting adjourned said they believed the Democrats' gun-control bills represent an attack on the Second Amendment. Christina Baker, a traveling emergency nurse who came to the hearing before a 13-hour shift, said she understood that there are good intentions at work but fears an "assault weapons" ban or poorly constructed law could make her a criminal.

"I'm a single female that travels the country by myself in completely new areas," she told the Free Beacon. "I never know where I'm going to end up, and to protect myself with whatever firearm I choose is so important to me. With the bills that are written and how they're written, 90 percent of my firearms, including my carry firearms, would be made illegal, and I would be made a felon overnight." 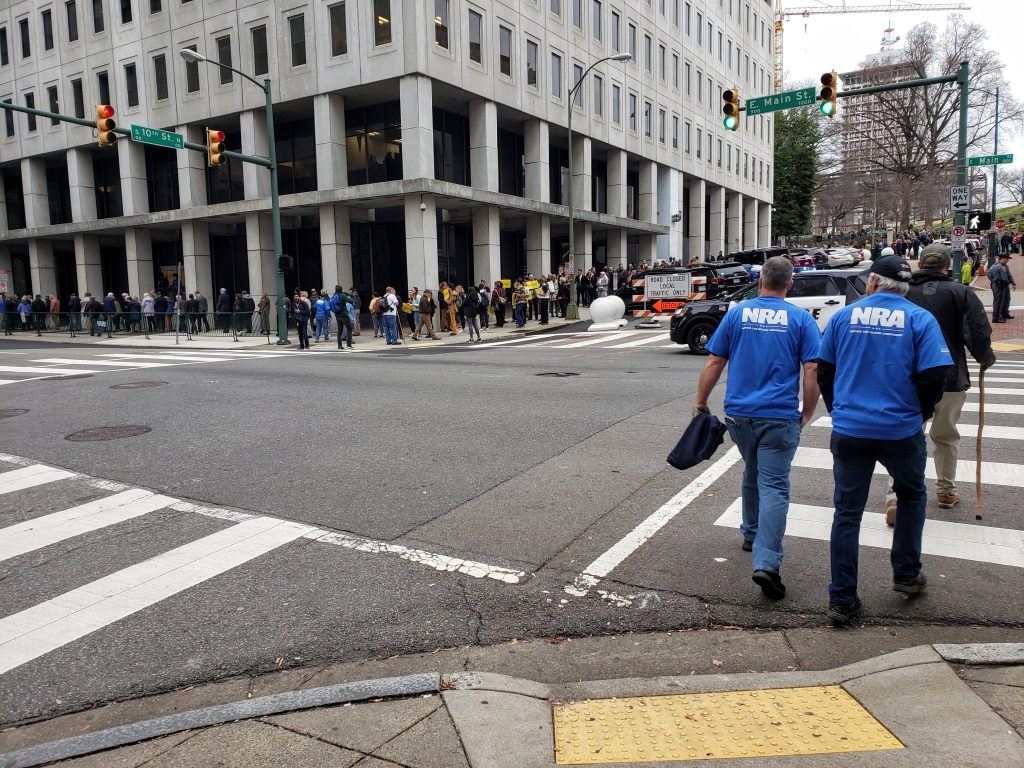 "I was disappointed to see the state legislature was interested in instituting these pieces of legislation," Richard Cosner, a preacher from nearby Chester and a 10-year Virginia resident, said. "The Constitution is specific; it ‘shall not be infringed.' If somebody wants to restrict those rights then they need to follow it by altering the Constitution, not by putting in place legislation that is in conflict with the Constitution."

Other legislative changes advanced by the judiciary committee Monday included a modification to a proposed universal background check bill, which would now apply to sales specifically instead of gun transfers more broadly. The committee also passed a "red flag" law—which allows a judge to order a person's firearms temporarily seized—but further restricted who could file under the bill for an order for a firearm seizure. It moved a one-gun-a-month purchase limit but included an exemption for those with a gun-carry permit. Lastly, it approved a bill allowing localities to regulate firearms, but only as to whether they can be carried on local government property or during permitted protests.

Reco Ford, a business owner and father who traveled several hours to Richmond for the hearing, told the Free Beacon he was most bothered by the red flag plan.

"They all bother me, but the one that's the most heinous is the red flag law because it violates multiple constitutional amendments. Second, Fourth, Fifth," he said. "‘Shall not be infringed' is pretty clear. It's written in the United States Constitution as well as the Virginia Constitution."

Ford said he plans to come back to Richmond again next week for a gun-rights rally organized by the Virginia Citizens Defense League. The event is expected to draw even more people than Monday's.

The NRA said it too plans to keep up the pressure. Spiker said today's turnout made him hopeful gun-rights proponents could have an impact on what makes it into law but also cautioned that the fight is far from over.

"Today was the first vote of what's sure to be 10 to 12 by the end of it," he said. "We will do whatever we can do to stop these things and fight for our members and reflect their views. This was the first skirmish in what will be a long fight."

Lawmakers will continue to work on the bills passed today and consider other gun-control bills. Those include a House of Delegates bill that would ban new sales of AR-15s, force gun owners to register AR-15s, and outlaw possession of magazines holding more than 10 rounds.

The size of the NRA's push on Monday eclipsed the attendance of a similar event held last week by Michael Bloomberg-backed gun-control group Moms Demand Action. According to Moms Demand's official estimate, just 200 volunteers showed up to push legislators for more gun control—an order of magnitude smaller than the number of NRA supporters in attendance on Monday. While the Free Beacon did not witness any Moms Demand Action supporters outside the Judiciary Committee hearing, the group's president posted pictures on Twitter showing eight members in attendance.